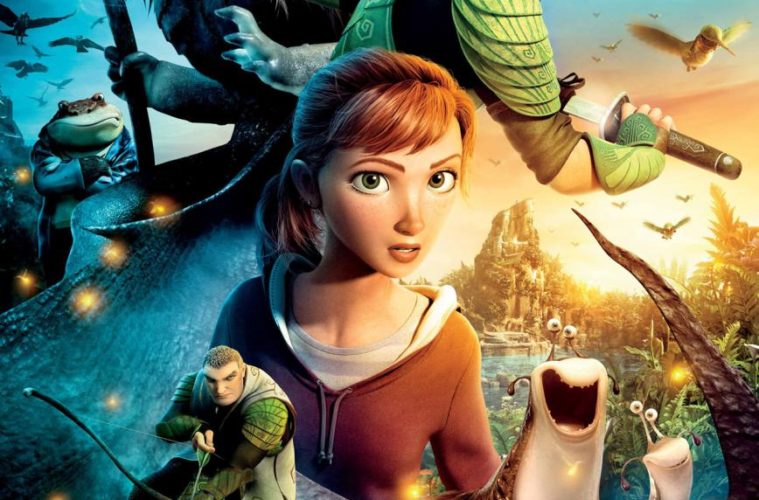 In William Joyce’s charming picture book The Leaf Men and the Brave Good Bugs, an aging grandmother introduces her grandchildren to the miraculous hidden world of her beloved flower garden. An artist and storyteller in the Chris Van Allsburg mode, Joyce gave the simple tale of heroic bugs trying to save their caretaker a gentle, nostalgic tone; lovingly composed illustrations captured the titular Leaf Men as mythical icons, as imposing and grand as the Martian warriors in a Edgar Rice Burroughs’ novel.

Like most great picture books, Joyce’s work is as filled with treasures as the unassuming garden at its heart, rewarding children patient and curious enough to engage it. Of course, not all kids read (or are read to) and so Leaf Men has made it’s way to the big-screen courtesy of Blue Sky Animation, trading in that matter-of-fact title with its up-front promise of adventure  for the far more generic Epic. Joyce’s quixotic story is traded up for an all-too familiar fish-out-of-water conceit, complete with diminutive forest soldiers, tree goblins, shrunken girls and slug sidekicks. In much the same way that Berkley Breathed’s quirky Mars Needs Moms was translated into run-of-the-mill space opera, Epic has been tamed and expanded to play like a high-fantasy summer blockbuster. The shrunken girl is Mary Katherine (Amanda Seyfried), whose mother dies and forces her into the orbit of her crackpot father, whose obsession with a secret world of fairies broke apart their family years before. Frustrated with wild ramblings about the leaf men and a forest Queen who keeps our ecosystem humming along, Mary Katherine (MK) finds it hard to relate to her dad and there is much pain and regret between them. Continuing the film’s unusually melancholic theme of fading transience, a disbelieving MK meets Queen Tara (Beyoncé), whose life force is ebbing and who fears a shift in the delicate balance perpetrated by the Boggans, evil wood sprites who want to cast the forest into darkness and decay. Before you can say ‘Fern Gully’  MK has been miniaturized by fairy magic and thrust into the microcosmic battle between the villainous Boggans and the valiant Leaf men, trading up their Luna-moths of the book for battle-ready humming-birds who flit off to war in beguiling green squadrons.

From a visual and thematic perspective, it is easy to see why Blue Sky would want to tackle Epic as their next animated adventure. The texture and scope of this world makes it an inviting and fertile canvas for artists and animators, and the exaggerated perspective of real-world environments adds a dose of exciting discovery for viewers who will delight in picking out the familiar from the fantastic. Just as the highlight of Blue Sky’s Joyce-inspired Robots was reveling in a universe constructed out of recycled human products, the best elements of Epic involve an ordinary forest floor opening up to reveal a dense, thriving fairy-tale kingdom that retreats from field mice, shares friendships with insects and snails, and protects and reveres budding plant life with the deepest spiritual respect.

Of course, this heavily populated ecosystem also proves to be a more challenging and photo-realistic setting than the impressionistic, cartoon worlds of Ice Age and Rio. Blue Sky is up to the challenge though, and they have clearly pushed themselves to deliver an eye-popping and overwhelmingly gorgeous product that is as impressive as anything DreamWorks or Pixar has recently done. The action sequences and character design reflect great imagination and rigorous attention to details; the caste system of the Leaf Men resembles Arthurian romance and the mucky, damp enclave of the Boggans summons visions of the outcast Grendel and his trollish mother. Best of all, this configuration of ecological cycles as Tolkien-esque mythology helps the environmental message feel organic instead of forced.

The voice work of fine players like Seyfried, Colin Farrell, Josh Hutcherson and Jason Sudekis helps the characters step out of their archetypal molds and occasionally enchant. Beyoncé is easily missed as the Queen and Christoph Waltz is criminally wasted as Mandrake, the leader of the Boggans. Aziz Ansari and Chris O’Dowd are the slimy sidekicks who feel like they wandered out of a 90’s era Disney movie, but the team-up offers some good laughs and the design work makes them hugely entertaining. In fact, on every potential sensory level, Epic is exciting and satisfying. Unfortunately, as a story it’s entirely predictable and stale, and so much of the plot plays out like a think-tank scripting session (behold, the five writers who worked on the screenplay). MK and her father are at odds, but their skirmish feels like it exists only because daughter-daddy angst is all the rage right now. There are some intriguing elements introduced early on, like the fact that the forest floor moves at a different temporal pace than the world of giants above, or that nagging idea that death is not a violation of nature, but an integral part of it. These concepts aren’t just thrown away, but ultimately rebuffed in favor of the simplistic good-vs.-evil struggle at Epic’s heart.

I was heartened by the idea that a children’s film dealing with our natural world would not shy away from acknowledging death, initially embodied by the loss of MKs mother but fanning out to include many characters, surprisingly extending even to Mandrake, the film’s heavy. However, the Boggans are seen as primarily destructive because they characterize rot, and MK’s sorrow is easily dismissed once she’s in proximity of Leaf-boy Nod. The nuances are simply washed away in favor of big set pieces and generic skirmishes leading to a completely telegraphed finale. The wonder of seeing something familiar through new eyes is drowned out by spectacle so routine it doesn’t even deserve that moniker. Children will enjoy Epic well enough, and their parents may find a little pleasure of their own upon seeing the wondrous landscapes created here. Neither group, however, is likely to remember much about the movie after the credits have rolled, which might pose the perfect opportunity for a bookstore/library trip to acquire Joyce’s cheaper and more cheerful Leaf Men.