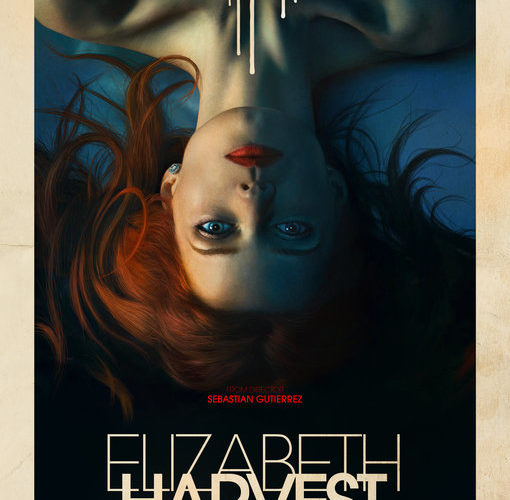 Review: ‘Elizabeth Harvest’ Finds Beauty in the Horror of Claustrophobia

Brightly lit as though a fantasy beyond Elizabeth’s (Abbey Lee) wildest dreams, we meet her and new husband Henry (Ciarán Hinds) as they drive towards the rest of their lives. She basks in the luck she believes she possesses to find a man of his intelligence and wealth even if she’s quizzical to his having chosen to marry someone as “simple” as she by comparison. But regardless of these nagging insecurities, Elizabeth does seem legitimately happy. The age difference between them is a non-starter and the smiles both share are genuine and immovable. Yet something does seem off. Their big mansion’s doors have fingerprint locks, the hired help (Carla Gugino’s Claire and Matthew Beard’s Oliver) act coldly expectant, and Henry demands one room to never be opened. Writer/director Sebastian Gutierrez’s Elizabeth Harvest therefore begins as a suspense horror presented as a series of static shots of beautiful rooms as thought-provoking as claustrophobic. Henry is like any older man in this type of potentially domineering relationship who devotes his love on a condition of whose very mention only piques a desire to break it. Elizabeth is like any other trophy wife coveted as an accessory and meant to be placated by material things rather than true companionship beyond sexual satisfaction. And Claire and Oliver are forever looming in the background — all the more unnerving considering the latter is blind. But while his stilted actions have cause, hers do not. Claire hides a secret. Perhaps it’s one shared by Henry or maybe it’s hers alone.

And while this portion of the film does end in gruesome bloodshed once Elizabeth inevitably looks upon that which was forbidden and which she wishes she hadn’t seen, it’s merely a prologue. Shortly after Act One closes a second commences as though a carbon copy of the first. What’s changed is our newfound knowledge and how it colors everything in a much different light. Horror is replaced with science fiction while evil can now exist in plain sight as goodness peeks through the dark veil of uncertainty. The motions remain the same with slight variation — not enough to alter actions, but just enough to admit the risk involved with what’s proving a sick, twisted game. But it only takes one mistake to turn a power dynamic upside down. Gutierrez does well to share just enough information so that each subsequent revelation can reframe everything before it. This is a tricky cinematic mechanism to wield, especially when your plot is as simple as the one here. It can be easy to lose yourself to the stylistic flourish of playing with your audience before ultimately ignoring how the necessary dissolution of that artifice might only leave them angry. I guarantee this will happen to many people watching because they’ll feel manipulated by superfluity rather than entertained by the effectiveness of omission. But I’d argue Gutierrez toes that line with deft agility, allowing the mysteriousness of his characters to captivate in their duality between assumption and reality. We’re in the dark because Elizabeth is. We’re blind until she sees.

This ensures that the final act hits with its promise of infinite possibilities. We learn that we’re not the only ones to be in the dark and that we aren’t the only ones who can still be surprised. Some secrets prove exactly as we expected while others hide more questions beneath their half-answers until we’re moved back in time to watch how this seemingly infinite loop of sex and violence started. And rather than just be a product of malicious intent, the truth is more complex. There is altruism involved despite the dubious morality at the back of what’s happening. At one point the mission here was not about becoming a God as much as doing Godlike things. Only after success does one’s impending corruption truly set in. I’ve intentionally kept this vague because Elizabeth Harvest works better the less you know. I personally knew nothing of what to expect besides some genre flavor. Experiencing just which genres were involved and which would replace others rather than merely enhance in real-time was a joy. The third act isn’t without its problems — Gutierrez plays with the audience effectively and yet the mere choice of doing so forces a lengthy period of exposition that can’t help being more telling than showing — but I was caught up in the ramifications of what was occurring and the sheer unpredictability of who or what would remain standing by the end to care. The key to that enjoyment is investment. Without it the whole falls apart. It won’t therefore be for everyone.

Those that do grab hold of the mystery, though, will be rewarded. Hinds is great no matter the subject matter and it’s nice seeing him go a bit wild with bloodthirsty malice. Gutierrez-regular (and partner) Gugino has much more to do than merely look on with the aforementioned darkened gaze. And Lee receives a leading role after her model-turned-actor had mostly served as eye-candy in visually sumptuous work such as Mad Max: Fury Road and The Neon Demon and handles herself well considering the emotional ringer her character is put through here. In the end her Elizabeth is possessed with an instinct for survival that will force her to sacrifice everything to achieve it. She must literally and figuratively combat her past and present to earn her future.