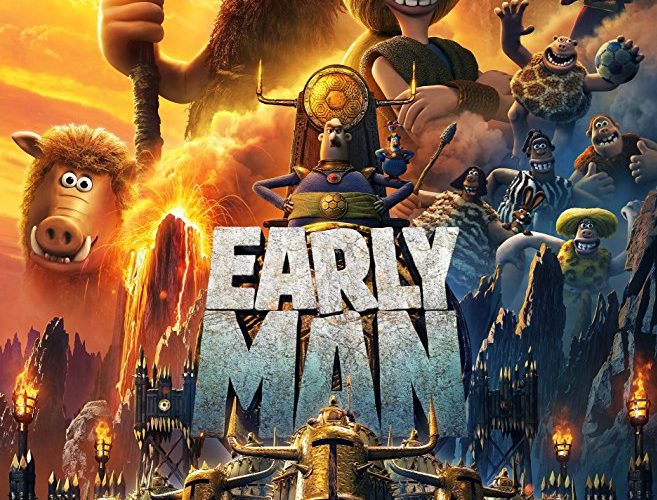 One of the key figures responsible for the creation of some of the most expressive and existentially relatable characters of the last four decades, Nick Park has spent his career innovating on the possibilities of claymation. Never mind the achievement that one of his most well-known characters is a mute canine who’s more slyly verbose than most motormouths in any medium. Mining liberally from the slapstick calamities of golden age Looney Tunes and the freewheeling absurdity of Monty Python, Park reimagined claymation’s populist appeal, paving the way for everyone from Laika to Wes Anderson.

That’s perhaps why it’s so gut-wrenching that Aardman Animation’s latest effort, Early Man, feels so anonymous and warmed over in every aspect other than its signature visual zeal. Park’s first return to directing since the excellent Peter Sallis swan song, A Matter of Loaf and Death, is filled with the expected studio touches. Guffaw-worthy sight gags litter nearly every shot, and while only a single familiar face returns, Early Man’s deliberately clunky design aesthetic fits neatly into a middle ground between the blocky character designs of Wallace & Gromit and the cleaner, more lithe movements of Shaun the Sheep.

A gorgeously verdant opening reintroduces the audience to Aardman’s penchant for gold star diorama-worthy landscapes, but it belies the slapdash nature of the film that follows. Its own elaborate gag about the creation of Fifa, the sliver-thin plot of Early Man follows Dug (Eddie Redmayne) and his tribe–a band of charming but stone headed neanderthals who’ve subsisted on rabbits for decades. Living in blissful idiocy in a valley, they’re soon pushed out by the monomaniacal Lord Nooth (Tom Hiddleston, nailing an audition to play an Ali G character in the inevitable reboot) and his Bronze Age army who’ve come to strip-mine the area for bronze.

Carried against his will to the Bronze Age city, Dug immediately feels out of place amongst these historical progressives and their sleek technology. Park shows a rapier’s wit for puns and anachronistic humor in these fish-out-of-water bits, but it’s all window dressing leading up to a reveal that what appears to be gladiatorial games is actually soccer. And the armored brutes he gets mixed up with are in fact the reigning champs–a team of narcissist pretty boys bankrolled by Lord Nooth. With Dug’s tribe banished to a no man’s land of monsters (one of the recurring bits involves a mallard with unusual dimensions and appetites), Dug hatches a ploy to get back the valley from Lord Nooth with a big soccer game.

The paradox of Early Man is then that the more it commits to its premise, the more hollow it feels. The joke construction is dense, but it too often feels like showboating. And pinioned by its own self-satisfied cleverness, much of the film comes across as a first draft. Spraying out gags with the speed and success rate of a firehose, every shot is layered with them, but the randomness feels less inspired than arbitrary.

Early Man is completely lacking in personality where it matters. As played by Redmayne, an actor who already becomes virtually invisible when not taking on some kind of hoary affectation, Dug’s characterization is so tenuous that his scripting begins and end at his ability to be tossed around with the ease of a twig. The tribe leader, Chief Bobnar (a sleepwalking Timothy Spall) is similarly bland, rendered without the usual drama of a conflicted leader, but also conspicuously missing an arc in its place. The rest of the tribe is so meagerly defined that even regular scene-stealer Richard Ayoade is only identifiable as the character who’s constantly embarrassed by his mom. And as a Bronze Age outsider who wants the chance to play soccer, Goona (Maise Williams), fares only slightly better with the actress continually tripping over a Parisian purr in pursuit of a generically spunky archetype. It almost feels like a knowing inside joke that the best character, Hognob, is a mute warthog.

Despite its many winks at soccer hooligans (the Bronze Age team color scheme’s similarity to Arsenal is surely accidental), the narrative feels barely discernible from the hundreds of direct-to-streaming kids’ movies where a billionaire threatens to bulldoze the community center unless an unlikely team can band together to play some unusual activity together. Writers Mark Burton and James Higginson trace over every sports underdog story cliche, but they rarely feel like they’re elevating the material. They’re reimagined in Aardman’s image. For instance, a training session is thematically re-skinned as the team skipping across rocks over lava instead of through tires.

Park and the writers feels compromised by the expectations to follow through on this story. It’s telling that the most inspired sequence has nothing to do with the plot as Hognob has to fake his way through a massage of Lord Nooth in a vain attempt at distraction. For every sequence like this, there’s as many that show the limits of playing so close to the letter of the things you’re parodying. And for a creator whose work has long balanced on the edge between kindness and chaos (the cute/terrifying schemes of Feathers McGraw, for example), Early Man hews too close to its children movie label, pigeonholing homilies about teamwork and family into a story that already feels rushed without forced platitudes.

In nearly everything other than its visuals, Early Man feels as ancient as its time period, a forgotten relic hibernating in development until its belated release. But coming from a studio and director who’ve repeatedly found new ways to reinvent the wheel, it’s extra disappointing to see them release something so primitive.