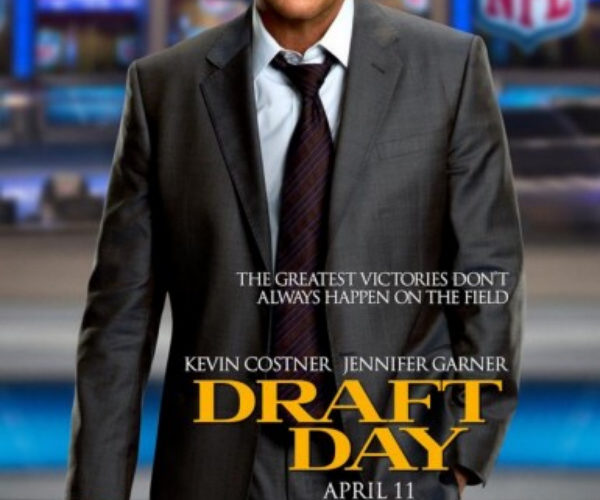 Kevin Costner built his career as a movie star on one American Pastime. With Draft Day, directed by Ivan Reitman, we get the aged actor’s continued attempt at a leading man resurrection via the “new” American Pastime.

Trading the glove for the pigskin, Costner stars as Sonny Weaver Jr., the much-maligned General Manager of the Cleveland Browns. It’s the morning of the NFL Draft and Sonny has just traded for the number one pick. Over the course of one day, our man will face the possible loss of his job and his girlfriend, played here by a very-game Jennifer Garner.

Written, with just enough snap and circumstance, by Scott Rothman and Rajiv Joseph, Draft Day works primarily as a showcase for Costner, whose nearing 60 years of age. His Sonny is a smart, tragic sort of hero, weighed down by the legacy of his recently-dead father and a football team that cannot seem to win.

Though aided by a strong supporting cast, including Frank Langella as the Browns’ obtuse owner, Denis Leary as the team’s cocky new coach and Chadwick Boseman as one of the hottest draft picks on the market, this is Costner’s movie and he knows it. Every scene revolves around him and the drama his character has stirred up thanks to his move for the first pick. It’s clear all involved are on the same page, including Reitman. Costner is shot lovingly and constantly. Every mistake Sonny makes he can explain away while every brilliant move feels spontaneous and inspired. This is a movie star in top form, aware of all of the nuances that charmed so many people so many years ago. Along with a very fun performance in the admittedly low-brow 3 Days To Kill, Costner hasn’t looked this comfortable leading a movie in over a decade (the underrated Open Range comes to mind).

Garner holds her own here, playing tough with a soft side very nicely. Too much of her character remains entirely dependent on Sonny, however, reinforcing how under-served half of the country is when it comes to relatable characters with real problems. And while Garner’s Ali is playing in a “boys’ sport,” it’s not enough to excuse all the time she spends solving the boys’ dilemmas and not focusing on her own.

This is a very American film that – not unlike Moneyball – attempts to expand its appeal by doubling down on its focus on the very American sport at hand so as to find the universal themes intrinsic to the game. The results are mixed and one wonders how much those out there not entranced with the National Football League will care about one man’s struggle with making the right draft pick.

Thankfully, that “one man” is Kevin Costner, still a worthwhile movie star with an affinity for sports.