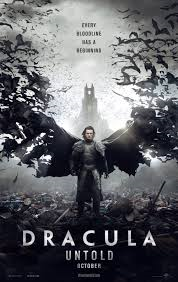 Dragging the dark, kicking and screaming, into the light is the intentional aim of Universal’s Dracula Untold, an obvious experiment in re-imagining the studio’s magnificent stable of horror icons as shiny, sexy super-heroes. With Luke Evans in tow as noble Transylvanian prince, Vlad Tepish, and drawing from the intoxicating allure of Bram Stoker’s classic figure, Universal had little trouble turning the historical impaler and literary blood-guzzler into a medieval Batman. Good luck guys trying to romanticize The Creature from the Black Lagoon. Who is your model, Aqua-Man or Namor the Submariner?

Kidding aside, this unwanted tendency to retro-fit timeless characters into less interesting genre molds is starting to wear thin mostly because it lacks such imagination. At face value, Dracula Untold, directed by newcomer Gary Shore, seemingly desires to do something fresh by going back to the monster’s origins as a Transylvanian prince desperate to defend his homeland from the invading Turks. Majestic scenery and a bevy of grand battlefield scenes attempt to tie the tale into the same gritty fantasy tradition of Game of Thrones; the glossy PG-13 treatment and a lack of dramatic immediacy remind more of a second-rate Lord of the Rings knockoff. Drawing more from the gothic romantic overtures of the opening to Francis Ford Coppola’s Dracula take than from any historical or literary legacy of the character, Untold purposefully leeches the monster from the man, all the while casting spotlight on dialogue by Matt Sazama and Burk Sharpless that prattles on about the need for heroes to become monsters. Evans, who has previously shown little flare for juicy melodrama, steps into the count’s cape and plays him, more or less, as a good man, beloved of his family and people, who willingly sacrifices everything that makes him human for the very human gesture of defending the helpless from evil.

When Dominic West’s ludicrously spray-tanned Sultan Mehmed recants on the brokered peace, and conscripts a thousand Transylvanian children into the Turkish army, including Vlad’s son, he sets the beleaguered prince on a collision course with true evil, manifested here by a cave-dwelling hermit who looks like Murnau’s Nosferatu, sounds like Charles Dance, and arm-chair philosophizes like Christopher Nolan. The script, culled from dozens of previous fantasy films, tries to invest the audience in Dracula’s dilemma; he’s got a three day return clause for his supernatural powers, provided he can finish the job of defeating the Turks and still avoid the demonic bloodlust. Neither Shore nor Evans can do much with Vlad’s internal wrestling over good and evil, mostly because the writers have refused to define the struggle with a realistic psychology. With the ability to transform into a cloud of bats, and wield the same creatures as a kind of psychic sword—extended from his bent will—Vlad never seems to risk much more than a few adverse setbacks on his road to super-heroic monsterdom. One of the appealing gestures of the original novel is that Dracula is a monster with a twisted, dark soul that still bases itself on human intuitions coupled with animal instinct. This Dracula, although it provides a reasonable fantasy saga in the meantime, never grasps the dueling natures of the character. Give him the fangs, the fury and the cape, but if Dracula lacks his own unique darkness, he might as well be Bruce Wayne.

The technical credits are good, the score complements the sweeping visuals, but this version lacks the fundamental juice that drives this concept; blood and a beating pulse—the same things that motivate and incense the literary vampire—are required for us to care about Dracula. In making him more human and more generically relatable to a hypothetical mainstream audience, Shore and company have completely defanged him. Yes, at the end of the film—which unsurprisingly routes us to the modern day to catch-up with Evans in time for a potential franchise—Vlad finally resembles the creepy comic character Universal wants him to be. What the studio has forgotten about their famous headliner, is that he, like the other Universal monsters, was always a kind of superhero, endeared to us not by any banal humanity, but by the tragic and ghoulish ways he had strayed so hideously far from it.