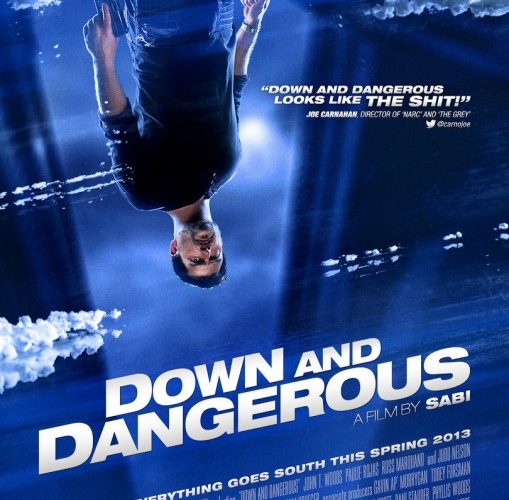 [Review] Down and Dangerous

If you’re familiar with writer/director Zak Forsman’s work you’ll know that it was only a matter of time before he branched out from subtle character pieces to the action genre. Whether the stoic performances, attractive compositions, or pulsing beats by composer Deklun, Forsman and his team at The Sabi Company have found the talent necessary to make Hollywood-caliber productions on a shoestring budget. And while the diptych of his Heart of Now and producer Kevin K. Shah’s White Knuckles aligns more with that independent sensibility as far as subject matter and content, sometimes you need a sleek adrenaline rush to catch an audience’s attention and increase name recognition. Down and Dangerous proves to be just that—a high-octane thriller about a cocaine smuggler appealing to Drive lovers while still retaining the filmmaker’s devotion to character and emotion.

It’s no surprise Forsman sticks to the artistic style he’s utilized since 2008’s I Fucking Hate You once you learn its very personal genesis. What could have easily turned into an over-the-top hail of bullets as DEA agents and mid-level traffickers collide with lone wolf smuggler Paul Boxer (John T. Woods), Down and Dangerous is more than a grab at mainstream appeal. Its origins instead stem from Robert Sabbag’s non-fiction novel Snowblind about freelancer Zachary Swan’s experiences bringing Colombian cocaine into America from 1970-1972—a man whose second job title was Dad. Inspired by his father’s artistry for inventive smuggling methods as well as his principled “people first” modus operandi, Zak crafted this script as a love letter to the man who first put a camera into his hands. It becoming a solid actioner is gravy.

Wasting no time, the film introduces us to Henry Langlois (Ross Marquand) pulling up next to a dealer at a red light, shooting him in the head, and stealing his stash. A complex madman tasked by Rafael Garza (Ernest Curcio) to simply put the fear of God into his cocaine distributing competitors, Henry coolly relays that his victims were suitably scared before killing them. It may be added heat Garza doesn’t desire, but he’s slowly learned to embrace the business’ cutthroat nature by understanding bloody hands can no longer be avoided. What neither he nor Henry anticipated, however, was that their targets were associates of the mysterious Boxer. While cautious to keep out of situations where owning a gun would be warranted, Paul’s also smart enough to know when a well-planned offensive becomes his best defense.

From here begins the cat and mouse chase that escalates into double-crossings and elaborate ruses once Boxer’s ex Olivia (Paulie Rojas) is found to be on the arm of Garza when called in to collaborate on a job. The plot knowingly becomes a convoluted intersecting of disparate motivations and selfish wants to show us how right Paul has been to sever teambuilding ties and work alone. Not only does it minimize trouble he himself isn’t the cause of, but it also guarantees his heart won’t get in the way of his brain deciding to go underground and set up shop elsewhere once the heat burns too high. Now with one associate dead, another in the hospital, and the woman he loves shacking up with the man responsible, Paul must tread lightly in his quest for revenge and escape.

Forsman and editor Jamie Cobb have an eye for detail that turns even the most static shot into a dramatic frame giving us exactly what they want to project. But while foot chases through an empty office building excite and encounters in an underground parking ramp utilize its flickering lights to suspenseful perfection, there’s room for romance and comedy as well. It isn’t just with Boxer either as Henry receives his own love interest in Haven (Ivet Corvea) to complicate things more once the truth of his identity is revealed in a way that almost makes us hope he finds a way out. There’s a touch of cliché too—especially with the triangle of Paul, Olivia, and Rafael—but not enough to distract you from the plot they help propel towards a final, three-pronged attack showdown.

The humor lies in the smuggling itself as stories Zak heard about his father inspire with impeccable wit that’s rarely forced. Best exemplified by the opening credit sequence wherein Paul concocts a fake corporate giveaway vacation to Mexico for two unsuspecting ladies, we get a sense of just how thrilling this life is as well as our lead’s professionalism and ingenuity. Littered with jokes such as Boxer’s associate Elliot (Dusty Song) snapping the winners’ photo with the lens cap on, it’s also paramount to understanding these characters and the lengths they’ll go to keep everyone involved out of jail. It’s a direct contrast to Garza and Henry’s shoot-first approach and a nuanced bit of storytelling that let’s us sympathize and root for Paul despite his own criminal activities from frame one.

And while the action is meticulously composed with a semi-long take pan of fisticuffs as well as extended scenes of running rather than quick cuts, calling it a low-budget rip-off of Drive is lazy and ill-informed. Yes, the glossy aesthetic and industrial score is now intrinsically bonded to Nicolas Winding Refn’s film, but a look at Forsman’s oeuvre shows he’s been working towards this point from the start. And while Drive felt as cold as its visuals despite Ryan Gosling’s obvious love-fueled actions, Down and Dangerous finds the kind of emotion in its characters where John T. Woods’ determined anger could just as easily break into pained tears. His Paul is an antihero, yes, but that image is juxtaposed against a man with a moral sense of compassion and personal sacrifice above greed too.

Woods is at his best when emotions takeover like the sensitive and scorned roles he played in Forsman’s short films. You know his Paul does everything at 110% with ice in his veins not for his own survival, but that of those around him. Judd Nelson is a welcoming voice of reason in two quick scenes; Curcio goes broad with his villainy; and Luis Robledo infuses the law as a DEA Agent existing in an intriguing area of murky gray. Rojas is definitely the pretty face, but her Olivia is written with a strength and confidence that shines through despite a couple overwrought moments. In the end it’s Marquand’s wealth of talent (beyond his internet clip of impersonations) that steals the show. His Henry and Woods’ Paul rise above surface appearances and so too does the film.

Down and Dangerous opens in select cities (click here for details) and hits VOD on Friday, February 14.