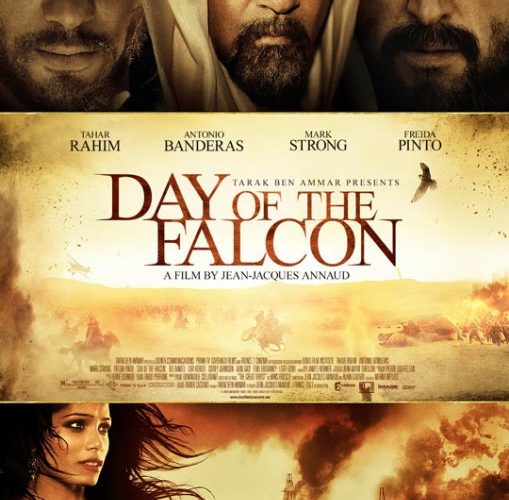 [Review] Day of the Falcon

The “new” film Day of the Falcon has had an odd trajectory to American theatres. Originally titled Black Gold, Jean-Jacques Annaud‘s contemporary epic in sand debuted at the Doha Tribeca Film Festival in Qatar and released in the director’s homeland of France way back in 2011. Kicked around the Middle East and Europe throughout 2012, critical acclaim was never earned as it for all intents and purposes got lost before being renamed and packaged for a United States audience that probably won’t fall in love with its depiction of Texan oil men pretty much cementing an unrest still seen today. Finally rolled out on VOD before a limited release in March 2013, it’s an inauspicious drop for a work born from so much talent. Based on the 1957 novel South of the Heart: A Novel of Modern Arabia by Hans Ruesch, even the source material’s genesis adds to the strangeness of the project. A Swiss born racing driver for the likes of Maserati and Alfa Romeo, the author retired to Naples in order to rekindle his literary proclivities with a few popular works including the book Nicholas Ray adapted for The Savage Innocents before tackling the Middle East. So, to sum up we have an Arab set and financed film from a French director inspired by a novel written by a Swiss in France. Now that’s quite the amalgam of personal and political baggage for a work so intrinsically bound to a region of high controversy. It’s therefore no surprise the main cast is a Brit, Spaniard, Indian, and Frenchman all pretending to be from the desert.

But I digress. Should we care where the story came from or how accurate what amounts to a coming-of-age fable on the battlefields of the “Yellow Belt” is? We all know American oil prospectors went to the Middle East with promises of riches to easily acquire the resources they needed with little to no care in how it would effect those they were exploiting. Day of the Falcon is not that story. Yes, Corey Johnson‘s Thurkettle provides a spark to reignite long-dormant hatred between Sultan Amar of Salmaah (Mark Strong) and Emir Nesib of Hobeika (Antonio Banderas), but it is their tenuous gentlemen’s agreement that ultimately causes the ensuing, violent chaos. In this movie Texas must stand under its oil derricks and hope a forward thinking, greedy king is the one left standing. Before we reach the battle on the oil fields, however, Menno Meyjes‘ screenplay takes us back fifteen years to where Amar and Nesib last settled their dispute. In lieu of a long, costly war between their two tribal leaders of lineage that spanned all the way back to Muhammad, an agreement was struck wherein Salmaah’s princes Saleeh (Akin Gazi) and Auda (Tahar Rahim) would grow up as Nesib’s own sons and neither he nor the Sultan would ever stake claim of the Yellow Belt again. It’s a convenient truce for the storytellers as they may now delve into the broad-minded tropes of sons of an ultra conservative stuck in his old ways living under the rule of a modernized liberal wanting nothing more than to be rich and prosperous like the West.

The years go by with Saleeh maturing into a regal prince and Auda taking heed of his father’s words to read the Qu’ran a little too literally as his nose is almost never outside a book. Everything remains peaceful and impoverished as Amar continues to live by the creed of “anything that can be bought is worthless” to contrast Nesib’s lofty ambitions for more. It only takes a piece of black shale to change everything as one man’s greed and misguided belief he could buy his adversary’s peace brings the entirety of Arabia to the brink of war. Blood is spilled, treachery runs afoot, and he who was once ignored and underestimated rises to become a great leader born of two converging worlds under Allah’s will. Neither destroying the old ways nor making them gospel, Auda inspires everyone. At over two hours in length, Day of the Falcon comes with many lulls and contrivances—especially at the start. With so many characters and tribes and traditions to keep straight, it almost appears the filmmakers hoped we’d miss the lazy writing while trying to wrap our heads around the rest. Unfortunately we don’t. As Auda, Saleh, and Nesib’s real children Leyla (Freida Pinto) and Tariq grow we are given a rushed cliff notes of stereotypical details that ultimately mean nothing. Auda is made to look so “soft” that his transformation is a bit too unbelievable and Leyla so set against Muslim traditions that her quick reversal in being used as a pawn through love rings entirely false. In fact, before we leave civilization behind I too began thinking this endeavor was a waste of time.

Something changes tonally in the desert, though, as Banderas and Strong begin to epitomize their disparate, bullheaded roles while Rahim’s Auda steals the show. A watered-down version of his transformative performance in A Prophet, Tahar’s subtle evolution from bookworm to Sultan is a fascinating journey doing its best to hybridize the two worlds he came from. With intelligent rhetoric, an unwavering moral center, and a level of compassion neither Amar nor Nesib could ever imagine possessing, he rallies an entire region of selfish men into a just cause that will hopefully benefit all equally rather than the one kingdom lucky enough to stake claim first. It’s through his character and his forward-thinking—and snarky—half brother Ali (Riz Ahmed) that Day of the Falcon resonates. Whether it’s enough to make the film worthwhile is up to you.

Day of the Falcon is now on VOD and hits select theaters on Friday, March 1st.