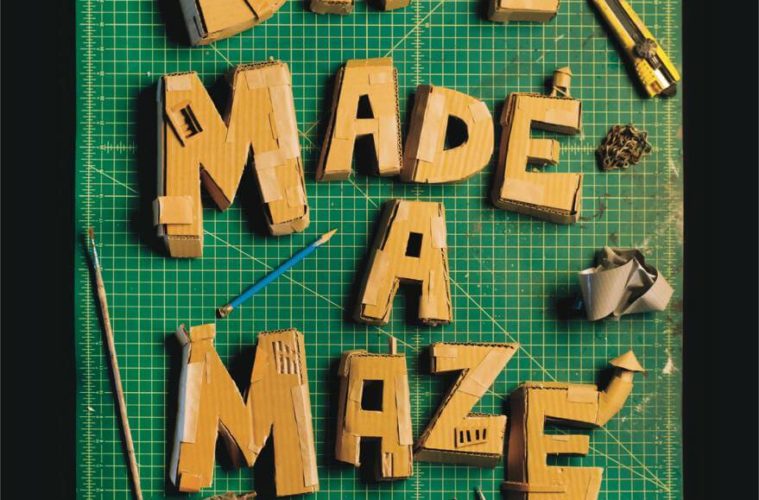 Review: ‘Dave Made a Maze’ Has DIY Charm and Humor

The premise is silly: stunted artist who’s never finished a project in his life finds inspiration through cardboard boxes and their ability to be molded into a literal labyrinth he’s already erected virtually inside his mind to ensure he will never fail (or succeed) since such a final verdict only comes with completion. So bogged down in existential dread—and made to endure it while girlfriend Annie (Meera Rohit Kumbhani) is out-of-town for a much-needed reprieve from his slacker-infused excuses—Dave (Nick Thune) allows its weight to force him into an abyss of despair he cannot escape alone. The only avenue towards freedom is ultimately found by going farther inward. Dave must finish something, everything … anything. He must commit to the work, to Annie, and to himself. While that all sounds like some crazy on-the-nose metaphor performed through imaginative dream, you’re only going to find yourself half right. Bill Watterson’s Dave Made a Maze (co-written with story originator Steven Sears) is working as fantasy and reality simultaneously. Usually relegated into cut scenes that enhance the lessons Dave learns outside of his overactive and all-consuming brain, these flights of fancy are actualized as plot through whatever unexplained phenomenon allows a TARDIS-like construction of paper to exist. And everyone onscreen is cognizant of this disconnect and the sheer audacity of Dave’s claim to be lost inside a cardboard box. They laugh and lament, resigned to the realization their friend is in the midst of a psychological breakdown. Only by entering the abyss themselves can they truly understand.

In goes Annie. In goes Dave’s best friend Gordon (Adam Busch). In goes their documentarian bud Harry (James Urbaniak) and his crew (Scott Narver’s cameraman and Frank Caeti’s boom operator) to capture everything that happens. Add the others milling about Dave and Annie’s apartment once Leonard (Scott Krinsky) lets the cat out of the bag so the entire neighborhood knows of this insanity—Kirsten Vangsness’ exuberant Jane, Stephanie Allynne and Timothy Nordwind’s excitable couple Brynn and Greg, and two random Flemish tourists—and the party only grows so that the desire for an intimate intervention spirals out into an adventure with as much folly and fun as death and destruction. After all, a labyrinth is only a labyrinth if it contains dangers to test your courage and wits. The result is a very funny, very charming search for purpose in a world seemingly devoid of any outside of practical and conservative notions of adulthood and success. This journey becomes as much about Dave trusting himself enough to jump into the unknown as it is about his relationship with Annie finding a necessary stability to evolve—one that cannot exist if he won’t embrace who he is and who she fell in love with in the first place. We learn early that she’s never given any ultimatums, never lost faith in his art or desire to find it. Her struggles lie in his inability to move forward because of his uncertainty in himself. He’s been the Minotaur and thus the destroyer of his own happiness all along.

So we watch as they move farther into the hellish physical manifestation of Dave’s subconscious with effectively malicious booby traps, aggressively territorial origami cranes, and a mesmerizing portal of which similarities to female anatomy aren’t lost on anyone involved. The maze has somehow taken on a life of its own creating new corridors and challenges unbeknownst to Dave. Any attempts to circumvent the rules—Annie brought box-cutters to slice through dead-ends—therefore means the actual Minotaur (John Hennigan) will change its course and move in for the kill. The only way to escape is to finally bring down the whole structure once and for all because that self-sabotaging, monstrous voice inside us never goes away. We simply can’t let ourselves become trapped within our personal labyrinths alongside it.

Above any comedy born from the filmmakers’ decision to let their characters comprehend the farce of their situation as well as its danger is the hilarity formed by an impeccably lo-fi production design. Everything is cardboard and paper, but the sets are huge with towering walls and an impressive tactility. Even better is the way the aesthetic is married to the cinematography for visual puzzles the audience can decipher as the cast and camera interact with what’s in-frame. The ingenuity that went into one scene shot statically in a way that creates a false perspective to be manipulated for sight gags while plot is still learned aurally through dialogue is immense. Like the faux documentary asides, what we see becomes as much for our benefit as the characters.

Where things go is easy to guess considering the plot’s rather simple trajectory of personal growth and emotional maturity, but the pathway is always surprising. Whether multiple deaths leaving silly-string guts and crepe paper blood or shifts in reality that turn humans into paper-bag puppets, nothing is off limits and everything adheres to Watterson’s do-it-yourself aspirations for unique worlds and inhabitants. So many great moments also come from consistent characterizations that never forget themselves despite the escalating situations surrounding them: paper-bag Harry doesn’t shake in fear at the Minotaur with the rest and cardboard Brynn’s demonic embodiment of evil cannot stop from fluidly transitioning into her past peppy high-fiver self. Dave Made a Maze is silly, but it’s driven by a ton of heart and meticulously detailed execution.

Dave Made a Maze hits limited release and VOD on August 18th.