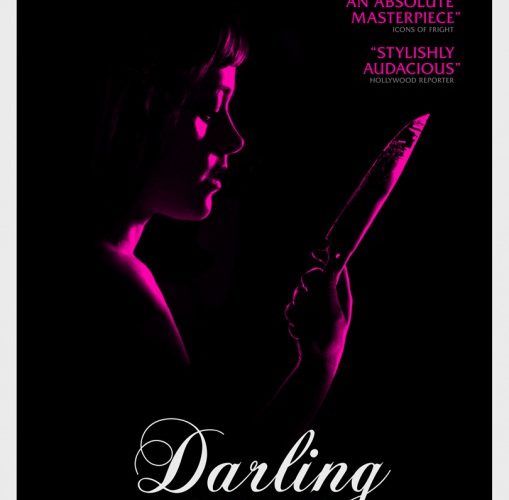 Much like with Stanley Kubrick’s The Shining, the job of caretaker isn’t an easy one in Mickey Keating‘s Darling. It should be: combat any prospective upkeep problems, tidy up, wait until the tenure is complete, and collect your pay. But not this New York City brownstone with its history steeped in satanic ritual. The Madame of the house (Sean Young) knows more than she lets on, dropping juicy tidbits about young “Darling’s” (Lauren Ashley Carter) predecessor’s suicide and cryptic warnings about a locked room at the end of the hall, but we think nothing of it. Strange things happen. Buildings are deemed haunted and myth trumps reality because its fun to lend the occult credence within an otherwise sane world. Sometimes, however, the Devil will arrive. I don’t mean that literally because having someone pop up onscreen sporting horns and a tail would definitely not congeal with the eerily sinister aesthetic Keating cultivates. His film is shot in high contrast monochrome to ensure nothing sticks out to distract us from the imagery he meticulously holds in frame. There are no bright yellows to steal attention from the strobe cuts of nightmare flickering through Darling’s eyelids and onto our own. The only flourish he allows is in the changing font for each abstract “chapter” from elegant script to mundane sans serif to overblown etched capitals in neon red assaulting our brains with color despite none arriving beforehand. These words devolve as Darling’s mental state unravels, their instability mirroring the unchecked violence bubbling to the surface.

Her deterioration starts almost instantly. Darling’s on edge from minute one, staring blankly at Madame as though answering her questions is an unnecessary chore she’d much rather skip. Even her interest in the breadcrumbs of rumor blatantly dropped at her feet seems manufactured as though she already knows. The silence of the empty house drops out to be replaced by whispering voices indecipherable to us but very meaningful to their target. They take Darling around the house, help her find a crucifix purposefully clasped to its chain upside down, and assumedly assist her in crossing paths with the unsuspecting stranger (Brian Morvant) soon to captivate her attention once the abject fear of his appearance shuddering through her body in waves subsides. Does she know him? Are the glimpses seen of her screams with him in bed from the past or the future? Who’s to be sacrificed — him or her? Keating introduces question upon question with nary an answer that makes sense to be seen. Right when we believe Madame is playing a trick something occurs to turn the table and put Darling in the driver’s seat. Maybe the house and its owner called to the young woman specifically or maybe she chose this job to exorcise her own demons. Maybe this unknown man saddled by the surname of Sullivan, Abbott, or who knows what abused Darling long ago and must pay the price. Or maybe he was simply unlucky in life to earn her ire for another man.

I won’t lie and say the film’s easily accessible or that it doesn’t constantly change focus as to who is in control at any given moment. No one is anything less than guarded. The epilepsy-inducing jumps to random horror and back aren’t explained as premonitions or projections of the past and reality is anything but certain. The big reveal we wait the entire duration for is never actually provided and the cycle of physical and mental anguish spins out of control. Pain and pleasure co-mingle in visceral sequences of brutality. Death is reversed and doubled-down upon as life transforms into a purgatory state of suspended animation and hallucinatory haze. The only thing we can truly hold onto is the unnerving vibe crawling underneath our skin. This is Darling‘s true worth: making even the most unsqueamish of audience members wriggle in their seats. It’s a tightly wound suspense thriller feeding us these flickers of graphic violence that we know are coming for which we’re still unprepared. And it’s very nearly a one-woman show with Carter commanding our attention via her wide, fearful eyes uncertain of what’s happening inside her. She’s less possessed than stripped naked of her devices. It isn’t the Devil speaking through her when she pounces with awkwardly abrupt outbursts of emotionless queries; it’s Darling no longer able to mask her excitement and/or angry insecurities with social convention. Every question becomes an accusation and those she speaks to unwitting partners in a nightmare she’s helpless to prevent.

So we spend this brisk 78 minutes watching and waiting — yes, I’m sure it’s a slog for those unwillingly to let the stark aesthetic and indie sensibilities wash over them. We wonder about Darling’s references, hypothesize what’s behind that closed door, and desperately await her utterance of the incantation scrawled by her bed. Unfortunately most mysteries we so vehemently align our interest towards will remain unanswered to only leave us with our anticipation. Keating’s nothing if not ambiguous in his plot motivations, keeping us confused and off-balance when all is said and done without concrete, mainstream resolutions. What’s supplied instead is intense, unadulterated dread. We’re frightened because above any of its occult overtones lies a cute, unassuming young woman simply unleashing her rage with delight.

Darling is out in limited release on Friday, April 1st.