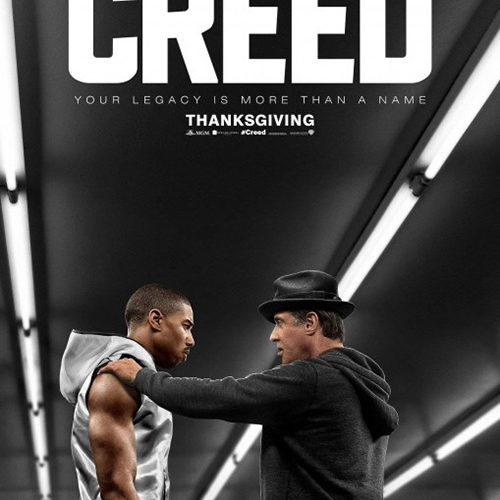 Early on in Creed, the seventh installment of the Rocky franchise, Adonis Creed (Michael B. Jordan) shadowboxes in front of a screen projecting footage of a bout between Rocky Balboa (Sylvester Stallone), and his father, Apollo Creed (Carl Weathers). It’s a sharp composition, but the positioning is the revealing aspect, as Jordan’s stationary form overlaps with both Rocky and Apollo – the David and Goliath relationship of the Rocky series.

There’s few greater visual metaphors for Creed as both a character, and as the continuation of a successful franchise than this image. Despite its reputation as an iconic underdog story, Rocky — and the franchise by extension — aren’t dark horses anymore, and neither is Adonis.

Director Ryan Coogler taps into something existential about the Rocky story. He knows that the legacy of Rocky will always tower over Creed, but by transforming those expectations into a mirror for its protagonist, Creed is able to succeed as an exceptionally entertaining sports story, and the groundwork for building an identity free from the past.

Adopted by Mary Anne (Phylicia Rashad), the wealthy widow of Apollo, Adonis grows up in luxury, working as a cushy office drone, and moonlighting in seedy Tijuana boxing matches. These details are barely referenced again, but they establish something important: Adonis has to choose to be an underdog. Adonis is handed a perfectly fine life, but it’s not legendary, and so he must masochistically earn his own legacy. Played with ingratiating charm and determination by Jordan, Adonis is recognizably a descendent in the Rocky mold, but a boldly self-aware and spiritual evolution.

Two features in, Coogler has curbed his worst impulses as a storyteller. Last year’s Fruitvale Station featured a powerhouse performance from Jordan, but it was stopped flat in its tracks by moralistic foreshadowing. (The infamous dog scene was critical shorthand for how not to represent your protagonist’s predicament.) Coogler and co-screenwriter Aaron Covington hit every expected beat in Creed, but they subtly imprint their own personality. For instance, the series’ signature training montage begins in an unorthodox place that genuflects to the past before thrillingly transitioning to Adonis running along a group of Baltimore’s most respected outlaws, the 12 O’Clock Boys.

The dialogue doesn’t shrink away from the past, referencing the ghosts nipping at both Rocky and Adonis’ heels. There are a few too many concessions to “odd couple” generational jabs, but Rocky and Adonis’ dialogue finds a groove nearly immediately. Coogler and cinematographer Maryse Alberti impart the fights with a comparably explosive urgency. Oscillating between rope side shots that stress the bare-knuckle abandon, and acrobatic weaves between over the shoulder and intimate profile, the fights are brutal, but underscored with infectious energy.

It’s the moments that take place out of the ring that truly elevate Creed. From the differing atmospheres of the gyms to the specifics of a random diner, Adonis doesn’t live in a vacuum of boxing. Even the soundtrack feels specific (no old-school hip-hop as an “urban” signifier), not as a marketing device, but as another touch of authenticity. Creed feels alive and engaged with black culture. It’s adjacent to its quality, but it’s heartening to see a tentpole release with so many great, well-developed black characters. Finally, Creed might actually be the rare movie to have underdeveloped white characters.

Adonis’ love interest, Bianca, feels like a direct corrective to the love interest’s historical thinness in sports movies. Tessa Thompson brought impenetrable conviction and cool to Dear White People last year, and both Thompson and the script make absolutely sure that she won’t simply be a trophy for Adonis. Bianca is ringside, but that’s entirely her choice, and she’s just as likely to call out Adonis, as pat him on the back. She’s uncompromising, and their relationship isn’t automatic. It requires time and an explicit understanding of how these people fit together.

Rashad’s small but pivotal role also bucks expectations, abstractly underlining the “sins of our fathers” legacy that hangs over everything. Her non-verbal reactions to the arc of Adonis are moving, bringing across a retroactive lingering pain that coexists with pride and understanding. It’s essential in demonstrating why these fights have stakes that go beyond reputation. Stallone also delivers one of his most understated and dignified roles in years as Jordan’s mentor. Dressed like a member of a baby boomer rat pack, his usual froggy throated delivery becomes its own affectionate inside joke, but also a persistent reminder of his sadness.

Adonis’ antagonist, “Pretty” Ricky Conlon (Tony Bellew) doesn’t fare nearly as well. Bellew doesn’t have the same sneak attack charisma of other recent athletes-turned-actors like Dave Bautista, but his thousand-yard-stare and fighting chops still make him memorable. Bellew’s nearly mythic unknowability only emphasizes how much this is a story about Jordan finding his own identity. And until the final reel when it does admittedly feel a bit rushed — especially given the intrusion of a twist — Creed feels like the work of a mature and confident storyteller.

That twist — which I’ll give no further context about — may rankle some fans, but like nearly every beat in this movie, it’s given both emotional rationale and an earned resolution. In the final scene, Coogler calls back to one of Rocky’s most iconic moments, but it’s not a moment of final pandering. It’s making peace with the past, and forging a future not for a franchise, but for Adonis Creed.