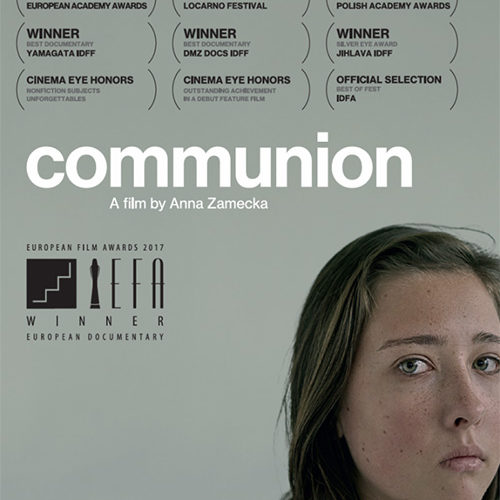 Review: ‘Communion’ is a Harrowing Document of Lost Innocence

While learning about what to share with the priest during his first confession, young Nikodem is told that stuffing his face with food is a sin known as gluttony. The autistic boy giggles and jokes that he believes gluttony to be a virtue instead — one to replace love since it being prone to kissing should render it the real sin. This sequence initially feels of a comedic, throwaway sort when compared to the rest of Anna Zamecka’s harrowing documentary Communion and yet that thought couldn’t be further from the truth. The gentleman attempts to set Nikodem straight by teaching how love, alongside hope and faith, is the farthest from sin one can go. Why then does the Kaczanowski family watch as all three deliver so much suffering? That trio of virtues is what fourteen-year old Ola clings onto. They are what allow her to somehow attend school, mother Nikodem, and run the house for her untrustworthy drunk of a father (Marek). She’s been thrust into this role as a result of her mother (Magda) being out of the picture without explanation besides the fact that she’s living with another man and their newborn baby. Despite all the frustrations that go with witnessing her dad’s immature ambivalence and dealing with the tribulations that come with a developmentally challenged brother, she refuses to ignore the bond of love that connects them. Tears are plenty, but she endures if for no other reason than their needing her to for their own co-dependent survival. She’s single-handedly holding everything together.

The titular event therefore presents an opportunity to put her hope and faith to work. If she can coerce Nikodem into studying so the priest will let him take his First Communion, the welfare-bound Kaczanowskis can justify an extravagance such as dinner out. If she can organize that meal, maybe she can talk her mother into making her domineering new beau watch the baby so she can join them. And if all goes well, Magda might even forget whatever caused her to leave and decide to be a family again. It may seem far-fetched, but why wouldn’t God grant Ola this one wish of reunion after everything she has sacrificed to this point? Why shouldn’t the teen that does everything for those she loves catch a break too? For seventy-two minutes Zamecka unobtrusively places her camera into their lives to find out. We watch as a welfare agent berates Marek for smelling of alcohol, Nikodem retreat inside his imagination to deflect from the anger swirling around outside the bathroom door, and Ola return home from a party (perhaps the first time we see a genuine smile on her face after so much time wearing the hat of thankless responsibility) only to acknowledge their apartment’s mess with no one else willing to help her clean it this single solitary night. None of them ever look our way or act as though we’re watching — except maybe Magda as the outsider coming in with enough pressure already. We’re flies on the wall desperate for hope to prevail.

Every candid conversation Ola has with her mother is therefore tinged with promise despite its crushing weight of futility. Every instance where the teen struggles to get Nikodem to pay attention reveals her bottomless patience demands frequent recharges sparked by selfishly incredulous screams for escape. We witness her lies of necessity as far as what the authorities need to know to keep their government assistance intact and the confidently firm chastisement she’s willing to shoot at her father when he starts behaving like the non-confrontational slacker he is. The film becomes a document of Ola’s lost innocence, hardening her to the reality that faith only gets us so far. She prays for happily ever after, but never deludes herself from knowing happiness is a reprieve from more pain. We receive the smallest glimpses of true joy — those moments when Ola can risk letting its possibility wash over her — to temper the never-ending swaths of adversity. Zamecka’s unfettered access also captures those moments that change how we think about what’s going on. It could be a sign of worry instead of annoyance from Ola when her father hits a roadblock with the potential of emotional ruin or the speed at which salvation for Magda can morph into hell. These are the scenes where Ola’s humanity comes through most as a result of her having to be strong for the others even as she mourns her own defeat. That’s why hope, faith, and love are so virtuous. We strive to maintain each despite so much stacked against them.