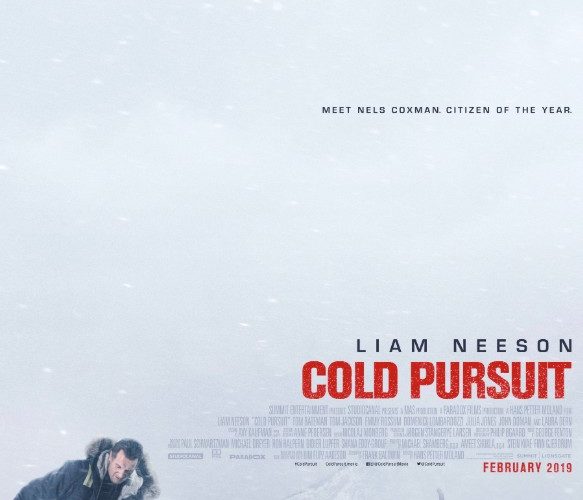 It’s become increasingly rare to see American remakes of foreign properties garner much traction or success, if any. It is rarer still to find one that justifies its own existence so prominently while almost aping its predecessor to a T. In the action-friendly-titled Cold Pursuit, the frigid sights and sounds of Norwegian director Hans Petter Moland’s In Order of Disappearance have been largely transposed to the ski town of Kehoe, Colorado, down to the silly gangster names. Hell, even a similar, brief physical gag with a yoga ball makes the cut. Moland, however, delightfully manages to wring even more sinister hilarity out of the situation in his Americanized retelling.

Swapped in for Stellan Skarsgård, Liam Neeson is snow plowman Nels Coxman–from Nils Dickman, to give you a sense of what a dead ringer this movie is–a husband and father who’s just been named Kehoe’s Citizen of the Year. The simple tranquility of Coxman’s one-road life is upended when his son is killed at the hands of a drug cartel, sparking him to embark on a half-baked journey for vengeance, all of which is standard operating procedure for a mid-budget Neeson actioner. Moland, of course, is keenly aware of this, and uses contemporary assumptions of Neeson’s persona to his advantage here. At a glance, Cold Pursuit looks like a thrice-distilled Taken, or another frivolous-but-fun Jaume Collet-Serra collaboration. At its harrowing, smirking center is a more-nuanced bloodbath in the spirit of the Coen Brothers or Martin McDonagh.

The nuance inherent in its American setting is what gives Cold Pursuit an edge over its Norwegian fore-bearer. As Nels ramps up his dishes best served cold, he stokes the fires of a gang war, instigated by the laughably-named Viking. An entitled trust fund baby/Silicon Valley entrepreneur-turned-mob boss, Tom Bateman’s vile turn as a gangster is a crunchy, smarmy, and clueless yuppie–unable to see a world beyond the things handed to him. The worst parts of 21st-century gentrification, it’s only fair Viking be pitted against Tom Jackson’s White Bull, the head of a Native American gang, ever at odds for control of crime in the greater Denver area.

Moland plays this struggle as a microcosm of Native Americans in film: strangers in their own land, reduced to be the savage other. Cold Pursuit defies that history while irreverently playing into our expectations of it. Viking’s uncouth dismissals of his adversaries’ culture both serves to highlight that history and more firmly cement his grotesquery in equal measure. The dynamic is a nugget of meat to chew on amidst the Pulp Fiction crime calamity of it all, and it elevates the proceedings beyond that of a perfunctory remake. This film wraps itself cozily in its modern American frontier furs.

If it sounds like Neeson is almost a subplot in his own action-thriller, it’s because he is. Cold Pursuit may put its Liam Neeson actioner foot forward, but it’s an ensemble crime caper through and through. There are, however, some non-violent casualties in the film’s wake. Laura Dern, while effective as Nels’ wife, is underused. She bats 1000 as she effortlessly mourns their son, but she disappears without fanfare. Disappointing, to be sure, but also perhaps a testament to Dern as a performer–she needn’t do much beyond being there to make a point. Equally curious is the presence of Emmy Rossum as an earnest Kehoe detective. She is consistently sidelined despite her suspicions of Nels’ unsavory killing, yet her detection amounts to being in certain places at certain times, rather than applying any real suspense or pressure.

Their overall presence is justified against the main trappings of the film. They are entities acting in good faith, either distancing themselves from the inane, silly violence of men, or trying, in futility to understand it. This concoction of slapstick grimacing is where Hans Petter Moland is most at home. There is nary a moment of death that isn’t drawn out for laughs, or a moment of comedy drawn out for sorrow. Among the ice and the wind, Cold Pursuit paints an unsuspecting, desolate place, where death doesn’t care about you, so you might as well laugh.