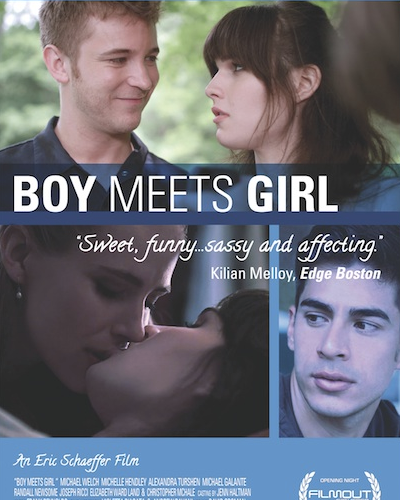 The transgender community are having a moment and now they have a date movie that above all succeeds as a well-written romantic comedy, if not a bit too on the nose. While not free from one critical romantic comedy trope, the material in Boy Meets Girl turns itself on its head in a daring and critical moment that subverts the kind of scene you’ve seen a million times. While new queer cinema has manifested itself in pictures like Weekend, which are still grasping at themes now 20 years old, Boy Meets Girl feels fresh and direct even if it’s full of explanations that should have happened years earlier.

Transgender actress Michelle Hendley — who, other than a deep voice, is able to flawlessly pass as cisgender — plays Ricky, an aspiring fashion designer living in Rural Kentucky. Perhaps a year or two out of high school, Ricky dreams of moving to New York City and starting her own fashion line. Craving self expression since a young age, we are introduced to Ricky as a tween in the height of what would be an awkward moment for any tween, compounded as she has begun transitioning.

Passing the time with her buddy Robbie (Michael Welch), she works as a barista in a local coffee shop while exploiting her wears on her own YouTube channel. Her family is loving and supportive, including her father and little brother. Ricky has struggled in the past for obvious reasons while dating; as an attractive women she struggles to date in a town that is conservative, yet accepting. To the fault of the film (perhaps due the picture’s budget) it doesn’t nearly explore the town as much as it should have. In a town this small there seems to be no reason to be accepting of a lovely and ambitious women, and that includes the town’s heterosexual males, who occasionally find themselves crushing on Ricky in flashback, as she comes into her own.

Deciding to try women she meets a beautiful southern belle, Francesca (Alexandra Turshen) who, along with her Republican politician father, are a bit more open minded than things would suggest. A number of factors, thankfully deeper than a Nicholas Sparks work, complicate the relationship, not the least is Francesca’s fiancé David (Michael Galante) whose feelings towards Ricky are far more complex than your run of the mill homophobe.

Boy Meets Girl is a perceptive and delightful date movie for anyone of any gender and orientation, written and directed by Eric Schaeffer, who specializes in mainstream-ish indie pictures exploring sexually taboos, including his senior citizen sex comedy Never Again. Sharp and funny, it asks direct questions that may be useful for the audiences’ less enlightened members (of course, their willingness to see this film proves a certain amount of interest). For a certain kind of audience, the one that may find this picture late night on TV or via Netflix, it proves to be invaluable and accessible. While it may not be a landmark of LGBT cinema, it’s an issues movie that’s light and entertaining, one in step with how the cultural and (eventually) political needle moves.