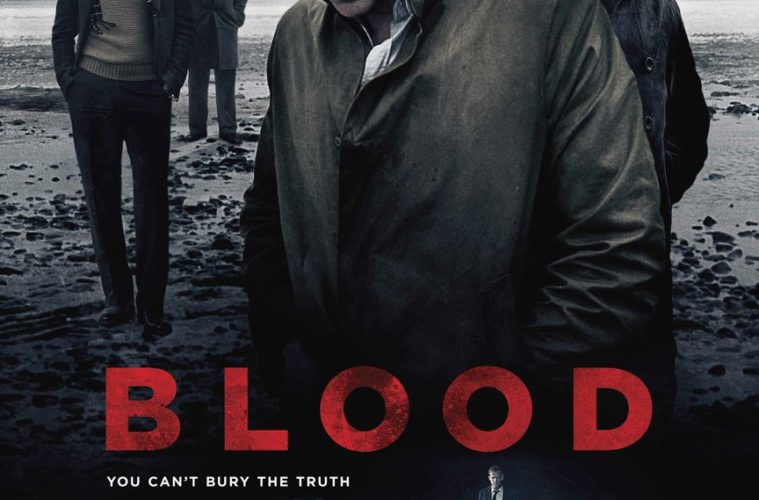 Writer Bill Gallagher took on the daunting task of turning his six-part, 360-minute miniseries Conviction into a 90-minute film entitled Blood. It’s a tale about family, mankind’s capacity to do wrong, and the psychology involved in growing up with impossible expectations and the knowledge they’ll never be met. No matter how good Joe (Paul Bettany) and Chrissie Fairburn (Stephen Graham) are as detectives, their legendary father Lenny (Brian Cox) will always overshadow them. He was a man who took the necessary measures to solve his cases by willfully coercing confessions, proud to tell his stories about taking suspects to an infamously remote island for personal justice at a time when such things could be gotten away with. Trapped in the bureaucracy of today, however, his sons have only their failures to be remembered by. As such, the mystery of a twelve-year old girl, multiple stab wound victim becomes more than just a new homicide investigation for the boys. Every community is shaken to their core when someone so young is brutally murdered—horrified and fearing for the lives of their own sons and daughters meeting the same fate. But while Chrissie and Robert Seymour (Mark Strong) feel the sting like any other, Joe can’t help letting it burrow deeper inside his soul. On the cusp of his twenty-year anniversary with a fifteen-year old daughter cozying up with a boyfriend he doesn’t necessarily approve, a palpable empathetic connection to the mother he explained would never see her little girl again forms. This coupled with a previous case it’s inferred he made a grave error on only increases his drive for justice.

It’s different for the rest because of their very clearly delineated lots in life. Their police captain has his position because he can look at tragic cases with an objective mind; Robert’s lone wolf persona allows him the ability to be clinical and unbiased, looking at the facts without personal feelings or love filtered eyes getting in the way; and Chrissie’s ineffectual proposals to his girlfriend make it so that his brother Joe and his family is all he truly has, a bond that ultimately lets him be complicit to an unforgivable act and psychologically tortured as a result of his decision. Their backstories have been carefully manipulated to position everyone perfectly with and against each other as the events surrounding this murder spiral out-of-control. Well-intentioned or not, we all have a capacity for evil. An intense character study full of guilty-ravaged minds, Blood is less about the girl’s murder starting it than how such a travesty affects our response. Everything mounts against Joe as his daughter drifts away, the job buckles down harder on what’s needed for a conviction, and his once mountain of a man father wrestles with Alzheimer’s in a way that brings the old man’s deep-seeded blame towards his son for failing a victim years ago to the surface. So desperate for a win that he can see nothing but guilt in the eyes suspect Jason Buleigh (Ben Crompton)—Joe finds himself willing to practice a little of his father’s island vigilantism for answers. And while his actions escalating beyond reprieve are far from surprising, the performances in the aftermath is utterly captivating.

Director Nick Murphy saturates each frame in the pitch-black darkness enveloping the Fairburn men as years of being told they weren’t good enough come to head. He has a brilliant cast at his disposal and a modest budget with which to steep Gallagher’s script in reality. The major flaw therefore lies in its adaptation process speeding things up that would have been more effective with extra time to breath. The story is condensed to the point of knowing exactly who will buckle under pressure, who will look past personal feelings for true justice, and who will rise or fall when internal torment prevails. All score and mood shrouds Blood in a hollow, visceral sense of tension while the rather transparent plot is sent to the background so that the actors’ performances shine above. We can guess where things will eventually end early on, but that doesn’t mark the film a failure when its cast is still able to engross you in the process. Cox is equal parts roaring lion when possessed by the clarity of confidence and memory and sympathetic ghost when stripped of his bearings through the confusion of his disease. Strong is stoically calculating in every move he makes, wading through the deceit and incongruities to do his job above all else. And Graham leaves everything on the screen once his wealth of emotions can no longer be masked by blind allegiance to a brother who has finally gone too far. But it’s Bettany at the center who overcomes the brunt of the script’s obvious plotting by bringing an unparalleled devastation to his haunted Joe.

It’s a strong lead in a well-intentioned crime thriller whose parts ultimately outweigh the whole. The dark melodrama is effective if unsurprising as the distilled character motivations turn patient development into potent psyches clashing on a canvas with a muddled morality. The actors all share the burden of retaining our interest after the initial victim’s murder is unceremoniously replaced by the one we witness from its wake and I believe they succeed because the nuanced performances remain solid in my mind as the details of the plot fade away. It’s the disparate places Joe, Chrissie, and Robert are in their lives that resonate because of what each brings to the table as far as why they do what they do. Gallagher sought to show how even the best of us is corruptible and to that end he succeeds.