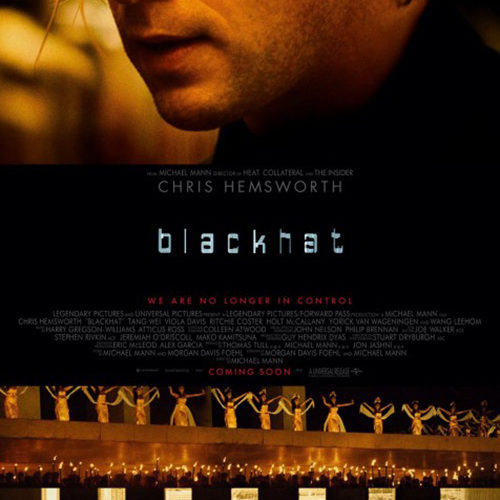 Is there a way for a village to get wiped out—buildings and people—and still ensure the dogs are safe? No. So why do Michael Mann and Morgan Davis Foehl write Blackhat in a way that forces its lead to speak unnecessary truths intrinsic to his initial declarations? This is not just being nitpicky, because they make Chris Hemsworth‘s Hathaway oversimplify and explain everything as though to a child. If crafting a film containing difficult techno babble, own it. Don’t talk down to your characters and us. Giving your lead an awestruck “bingo” expression each time he delivers an obvious revelation only ensures we all look stupid. It’s insane how many times it happens too, those “a-ha” moments straight out of House, M.D. only without the doctorate-level intelligence necessary to acquire them. I’m talking Chinese detectives calling an entire day of surveillance tracking three separate individuals with GPS a bust only to have an ex-convict hacker enter the room and epiphany that the trio of paths converged at a single point along their trajectories. How does any law enforcement agency not think to compare multiple suspects when their job is to find a connection? Add overt caricatures like the sassy government official who you DO NOT call “Chica” (Viola Davis‘ Carol Barrett) and rushed romances simply for sex appeal (give Hathaway and Wei Tang‘s Lien Chen history and their tryst will be so much more believable) and you find yourself watching an 80s B-movie.

Now, if that were the intent I’d probably have a completely different read of the whole. As is, though, I’m not inclined to believe it because Blackhat is nothing if not consistently unsure of itself and seemingly unfinished. There’s the bad sound design making every scene of foreign language appear as though overdubbed five times until no words match moving lips; an attempt to infuse a visually arresting digital synapse adventure of light through computer chips and wiring only to stop after two almost identical instances complete at the start; and the constant toggling between cinematography smooth enough to utilize a crisply shallow depth of field pointing out specific details in the frame and a grainy Go-Pro frenetic shake failing to replicate Bourne Identity‘s aesthetic, in large part because it looks like it was shot on a cellphone. So, whether it was the inconsistent visuals or the soap opera-level script constantly explaining what we already know (you don’t need to tell us how it’s too “hot” in the melting down reactor to download code files fifteen minutes after you already did), I found it very hard to care about anything besides my hope for a slick, climactic fight against the man behind the carnage (Yorick van Wageningen). Not all is lost because Mann does deliver on that hope as well as providing a quick burst of violence to show how no one is untouchable if their death helps advance the plot. He did a similar thing in Miami Vice, another film that felt unfinished. Whereas I still contend that one can be great with some extra love and edits, I’m not so certain about Blackhat.

There is an intriguing enough plot to keep our interest, whether it be the US jointly working with China to stop a cyber terrorist or the oft-used trope of getting a convict out of jail to help take down an even worse monster—it’s just obfuscated by an excess of filmmaker insecurity towards what we’ll understand without being talked down to like a child. It’s not unique or even hard to figure out if you’ve seen your fair share of spy thrillers, but it gets fun nonetheless once 80s bagman Kassar (Ritchie Coster) joins the fray with his automatic weaponry and expendable heavies to relieve encroaching boredom. And while making China’s liaison Dawai Chen (Leehorn Wang) Hathaway’s roommate in college is far-fetched, the film embracing such implausibility and intentionally skewing to the absurd could have proved successful. Above these issues, Hemsworth pleasantly surprised me in the role despite his casting being what I questioned most before sitting down. No disrespect to him as an actor, it’s tough to buy a guy with Thor’s physique as a computer geek incarcerated for hacking. Foehl actually does a great job making it believable by giving him an extensive background that began with a bar fight, a lack of a college degree, and the necessity to join unsavory folks in order to make a living. So he’s a hybrid coding genius and hothead brawler declaring that his time in jail was spent becoming strong in mind and body. His brute force obviously helps in the fisticuffs arena later on when things get crazy, so it’s good to see the screenwriter allowed such a duality to work.

Sadly, no matter how hard you try making a character three-dimensional, placing him in a flat world does nobody any favors. Mann introduces so many different elements and ultimately throws them away for a completely new direction until it too gets replaced. Perhaps this project was a way for him to experiment after a six-year hiatus since Public Enemies came out. If that’s the case and whatever he does next blows us away, Blackhat will earn itself a place in his oeuvre as a crucial stepping-stone. After all, you can’t blame the guy for wanting to get these ideas out of his system to find one that sticks. I sincerely hope he did, though, because I’m not sure I can go along with his journey if this is the Mann we’re expected to follow towards the future.