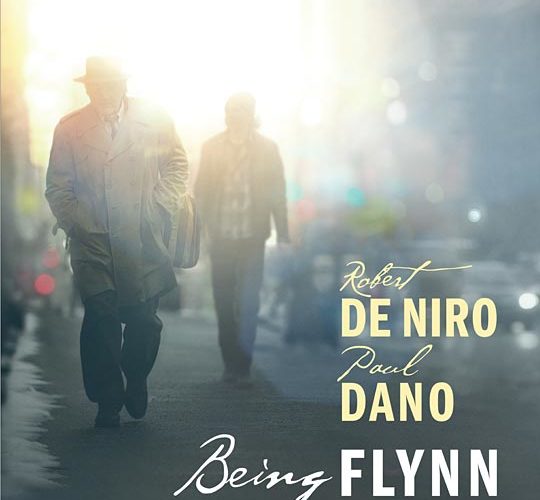 Being Flynn, directed by Paul Weitz, has been a long time coming. Based on the autobiographical novel Another Bullshit Night in Suck City by Nick Flynn, Weitz has been determined to get his vision of Flynn’s book into theaters for nearly a decade. These are the films you root for. The small personal stories who’s odyssey towards that impossible place called production becomes a small, personal story all its own.

So much more painful stings the disappointment when said story doesn’t live up to its journey. Being Flynn, as its softened title suggests, is still about a young writer and his absent, then not absent, writer father, but lacking most of the blood, sweat and tears of the book.

Though Weisz has remained faithful to the work – Flynn spent every day on set as the director’s right hand man – much of what made Flynn’s sprawling narrative work is gone. This is a familiar case of a movie adaptation missing that not-quite-knowable factor present in the original work of art, and failing to ever survive the omission. Recall Watchmen.

Paul Dano plays Nick Flynn, a young, semi-employed writer who’s self hatred knows no bounds. At near bottom (we’ll see what bottom looks like later on), Nick starts up work at a homeless shelter. There he finds some peace in helping the helpless and meets an interesting girl named (Olivia Thirlby) in the process. Then, one fateful night, his vagabound father (Robert De Niro) appears at the shelter, looking for bed to sleep in.

And thought it’s admittedly nice watching De Niro flex his acting chops a bit as this cocky, self-absorbed survivor, the old thespian never seems to find a common stride with the young Dano. While they both succeed on their own, there’s rarely a moment where it feels as though both men share the last name Flynn, not mentioning the fact they look absolutely nothing like one another. Keeping with this pronounced lack of legitimacy and strange casting is Thirlby, who’s character is a composite of sorts written solely for the film. Charming though the young actress may be, she never feels right for the role of fractured-but-inspiring romantic interest, playing any kind of alternative-ness as though her character was just really tired.

We get enough tired from the other members at the homeless shelter, including Lil Taylor as a recovering (and soon to relapse) drug addict and Wes Studi as a character named The Captain, who runs the joint with the usual laconic stoicism. Unfortunately, neither of these accomplished character actors are given much to do. The majority of Taylor’s character’s progression, or degression, comes from a odd scene in which all of the employees at the shelter speak directly at the camera, a rather garish tonal miscalculation on Weitz’s part.

There are interesting touches as well, courtesy of Weitz, in which we watch De Niro’s Jonathan Flynn desolve further into homelessness. Consider two parallel scenes: in the first, Jonathan has paid for coffee at a diner and watches the waitress hand a free cup to a homeless man. In the second, Jonathan is the man getting the hand out. Sadly, these little moments don’t add up to enough. This is a good story, told both too carefully and without enough detail.