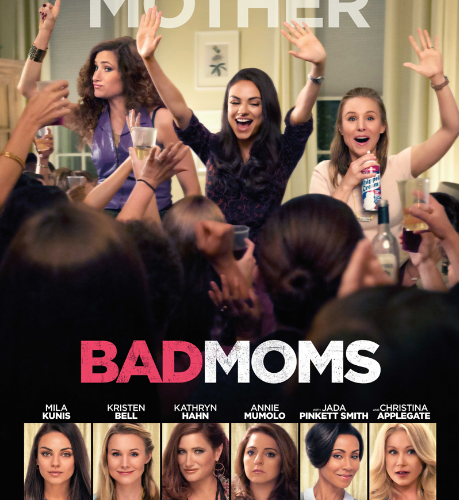 Subversive in passages, Bad Moms is a fairly paint-by-numbers affair with all the beats that years of test audiences have told Hollywood they need to include, from the protagonist trading up to the baddest of the bad moms growing to learn how to balance being both bad and good. It’s the kind of screenplay careful observers of the genre could write even before walking in the door of your local multiplex, based on recycled parts of other films. A gag involving a “mom” bra, for instance, was done just as effectively in The Boss, an earlier Kristen Bell outing from April; this time Bell watches as Kathryn Hahn critiques Mila Kunis’ “mom” bra. Both male-directed directed pictures are cynically crafted for a suburban gals night out at the local cinemas, as focus grouped and market researched as the T.G.I. Friday’s margarita I imagine this picture’s core audience will be enjoying before the screening.

Is Bad Moms in its mild subversion a minor revolution? Perhaps, but the revolution has never looked so bland. It’s The Hangover while still doing it all and having it all, like Moms’ Night Out swapping a Christian message for a lot of cheap and unblessed wine. Through the rebellion there is no opting out from motherhood, even if their husbands can and frequently do. There’s something distinctively old school about this mostly white portrait of unrest in the local PTA. Bad Moms could have been a brilliant Nicholas Ray or John Cassavetes picture in another era.

Kunis plays Amy, who works part time in a hip artisan coffee roaster in the kind of office where nothing gets done and everyone still lives like they’re in college. She has two kids, Dylan and Jane, with Mike (David Walton), who is a parody of the do-nothing dad. You’d think a couple this young would have known better and stopped before they had their second child. The focus of the comedy is more or less the present tense, not focusing on Amy and Mike’s mistakes as evidenced in a funny scene featuring a scene-stealing Wanda Sykes as a marriage counselor.

Challenged after a painful day of running around from the vet to soccer practice and then to an emergency PTA meeting full of high-class problems, Amy decides to opt out. She drinks (and drives, a few times) with her new pals Carla (Hahn) and Kiki (Bell). This leads to a few comic montages as Kiki, the quiet one, comes out of her shell while Carla potentially learns to start caring a little more. The trio decides to take on the oppressive Gwendolyn (Christina Applegate) and her squad (filled out by Jada Pinkett Smith and Annie Mumolo) as Amy runs for PTA president, garnering a populist appeal by throwing a massive house party.

Written and directed by The Hangover screenwriters Jon Lucas and Scott Moore, the film is thankfully a great deal smarter than their idiotic 21 & Over.  Bad Moms certainly has a populist appeal, like Amy as she stands up to a demigod in the form of Applegate’s Gwendolyn. A witty film might have had a sharper political bite, especially arriving on the heels of two political conventions — The Purge: Election Year this is not.

The jokes simply don’t land as hard as they should, even though the cast has a genuinely interesting shorthand with each other. They’re not given nearly enough to do, yet the strong comedic cast each play their type well, from Kunis’ perfectionist, Bell’s submissive wallflower to Hahn’s recklessness. There’s no shortage of various dull upper middle class problems to have, but then again, anything deeper or more realistic would kill Bad Mom’s escapist, artificially-flavored T.G.I. Friday’s margarita vibe.