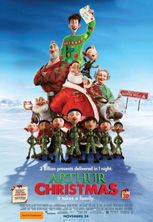 After the box office failure of Flushed Away, I was worried Aardman Animations may have been dead. With the fire that consumed thirty years of their history and the realization mainstream Americans simply don’t ‘get’ thew British-tinged dry humor, the Academy Award for Wallace & Gromit didn’t seem to prove enough. But Dreamworks’ loss became Sony’s gain as the studios worked out a three-year deal to keep on creating. And although the stop-motion has taken a backseat for computer graphics—don’t worry, their next one is good ol’ Plasticine—the trademark sensibility remains. Unafraid to tell an intelligent story with biting humor and an absurdist bent, I hoped their latest foray into the holiday genre with Arthur Christmas would rise above my basement-level anticipation and shine where so many animated films have recently fallen pray to easy jokes and cookie-cutter plot progression. And while it does this in spades, the IQ-level may be a bit out of reach for the youngins’.

From start to finish, I laughed harder than I have at most comedies I’ve seen this year. The Bristol-based studio found a way to keep the yuletide essence of Christmas intact while bringing it into the twenty-first century. Making the North Pole a militarized zone of ambitious elves trained in covert operations and technological espionage, Steve Claus (Hugh Laurie) has turned the night of December 24th into a well-oiled machine. Intricate codenames, mission protocol, and stealth operations have replaced a storied lineage of Santa Clauses who got the job done with a sleigh and eight reindeer. The need for magic dust is retired as the new S-1 aircraft equipped with faster than light speed and a starry sky-mimicking undercarriage has made tradition obsolete. With Steve as the man behind the man, Santa himself—Malcolm Claus (Jim Broadbent)—merely becomes a jolly fat figurehead who fills out the suit but knows precious little about the day-to-day.

Like Hop from earlier this year, the idea of our fantastical holiday heroes being immortal seems to be gone. Both the Easter Bunny and Santa now appear to be titles passed down through generations like royalty, each Prince groomed to be the men of myth their family name holds onto proudly. But with the new technology Steve has incorporated into the North Pole, the magic dust fueled reindeer aren’t the only things missing. A militantly run corporation of flow charts, espresso brewing assistants, and margin of error have replaced the spirit of Christmas itself. Back in Grandsanta’s (Bill Nighy) day, he would deliver presents after a coronary and the loss of seven reindeer. The duty was to make sure every child on earth had a smile on Christmas morning. Once the personal touch is removed through electronics and a fleet of ninja elves sliding in and out of houses while Santa fumbles his way through one living room, an accidentally undelivered toy isn’t as big a deal to the bureaucratically minded executives in control. And this is where Arthur (James McAvoy) comes in. The youngest son of the Clauses—Imelda Staunton rounds out the clan as the Mrs.—his awkwardness, fearful demeanor, and clumsiness makes him the black sheep. Screwing things up as though it were his job, the boy’s exuberance finds a home in the letters department where he can reply to the world’s children and assuage their doubts towards Santa’s verisimilitude. His father is his hero and Christmas has always been the highlight of his existence, so when he finds out Steve’s system prevented little Gwen Hines (Ramona Marquez) from getting the sparkly pink bicycle she wished for, his worry pushes him to save her holiday. Recruiting a hilariously bitter Grandsanta, his cataract-ravaged relic of a reindeer, and the gift-wrapping elf stowaway Bryony (Ashley Jensen), the young idealist takes Evie the sleigh out of retirement and sets off towards Trelew, UK while the rest of the North Pole sleeps.

It is a simple plot that shouldn’t be too hard for young children to comprehend and get behind, but its orchestration may leave them confused. In between my own hysterics at what I saw and heard, I could tell the kids in my theatre were growing restless. The atmosphere turned and cries were heard from babies as the school-aged sat quietly missing joke after joke. I think it begins with the military metaphor, a brilliant mirrored perspective that fits the scope of a mission such as Christmas. We laugh because the elves are in camouflage; the Clauses are adorned with General-esque uniforms and berets; and the North Pole resembles mission control in Apollo 13. Stern orders are shouted, subtle jokes like Steve’s elf assistant Peter’s (Marc Wootton) obvious man-crush, and computer screens out of “24’s” counter terrorist unit litter the screen, but all become chaotic excess for those too young to understand their complexities.

I truly hope the film itself doesn’t suffer a slow death because of this disconnect. There is so much to love for the more mature crowd with Nighy’s insane ramblings; Broadbent’s bumbling aloofness; Laurie’s complete inability to engage kids without speaking like a robot; and McAvoy’s insecure hero whose ability to worry too much is what allows him to find the courage to save the day. Visual gags such as a Mexican/English snafu, flying desert lions and elephants, and fluid cinematography that makes you think you’re playing Call of Duty marry perfectly with the more subtle queues that fly by quickly like an unsuspecting Arctic seal and a businessman giving his secretary a gift at the office in the wee hours of the night. Look for funny background jokes like the dry cleaning tag on Grandsanta’s suit, the displays of computer screens flashing words, or even the hilarious drawings of little kids to Santa portraying him burning in fireplace flames too.

Arthur Christmas has something for everyone and is definitely my How to Train Your Dragon of 2011—as in, closest to Pixar quality non-Pixar work of the year. Geared to an Anglophile like myself as well as older children with a handle on history, geography, and perhaps Santa’s true identity, it should not be dismissed as a boring cartoon your youngest asked to leave halfway through. Peter Baynham and Sarah Smith have refused to dumb their vision down by retaining a wonderful sense of over-the-top absurdity and smart wit with off-the-wall banter leaving your side in stitches as you scratch your head. I would definitely add it to my permanent winter viewing queue—it’s that much fun.