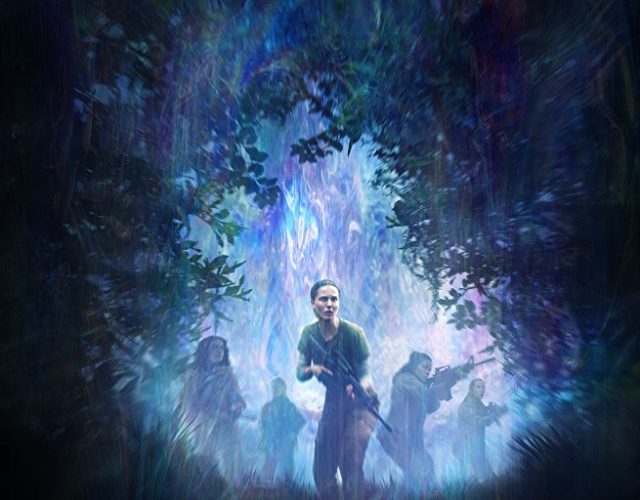 Review: ‘Annihilation’ is Beautiful, Horrifying Sci-Fi with a Bold Imagination

More terrifying than any creature Hollywood could dream up is the unraveling of one’s mind—the steady loss of a consciousness as defined by the memories, motivations, and knowledge built up from decades of experience and reflection. With Annihilation, Alex Garland’s beautiful, frightening follow-up to Ex Machina, he portrays this paralyzing sensation with a sense of vivid imagination, and also delivers a cadre of horrifying creatures to boot.

Fans of Jeff VanderMeer’s novel (myself included), will realize right off the bat that this is another beast altogether; there’s more laying of the groundwork to kick off the mission, a deepening of the backstory, no mention of hypnosis or entire locations, a wholly different ending, and more outright humor between our group, who are given names this time around. The Biologist is Lena (an excellent Natalie Portman), a former soldier; The Psychologist is Dr. Ventress (Jennifer Jason Leigh); and The Surveyor is Josie Radek (Tessa Thompson, sadly a bit wasted). The Anthropologist character from the book isn’t present; instead we get the comedic, brash Gina Rodriguez as the paramedic Anya Thorensen. And there’s a fifth addition: Tuva Novotny, as the timid Cass Sheppard.

It’s been three years since a meteor struck a lighthouse on the Louisiana coast and formed the otherworldly realm known as Area X, which is constantly expanding as the government attempts to cover it up as a chemical spill. One year ago, Lena’s soldier husband, Kane (Oscar Isaac, who, like always, does a lot with a little), ventured into the mysterious abyss (more specifically referred to as The Shimmer) on an expedition, and he’s now the only person to ever return. However, upon reacquaintance, it becomes clear something is off as he acts mechanically cold toward Lena before slipping into a coma. In a dangerous bid to save him, Lena takes it upon herself to go on the next expedition, and so begins a hypnotic, reality-blurring search for resolution.

Garland’s forceful command of tone is carried over from his debut film, keeping a narrow focus on Lena’s point-of-view and letting the script breathe as we experience both her visceral sense of awe and dread, marking an improvement over Ex Machina’s too-tidy structure. By creating a chamber drama for his directorial debut, he was able to flex his writing muscle with wall-to-wall, neatly-configured dialogue; but Garland’s philosophical queries here are more evenly doled out, giving welcome room for more interpretation on the audience’s part. In between the cross-cutting structure of flashbacks, the expedition, and the debriefing, there are moments of effective romantic banter, contemplation about humanity’s desire for self-destruction, and a genuine fear of the unknown, all while keeping an unceasing, underlying sense of both dread and wonder.

He may depart greatly from VanderMeer’s book, but Garland does his best to replicate the novel’s atmospheric marvels. With its rainbow-esque palette of flora-covered splendor to mutated animals that haunt the dark, the environment is by turns glorious and petrifying, the latter of which gives way to a few bone-chilling moments of terror. As production began, cinematographer Rob Hardy stated that the only film used for a visual reference was Stalker, and a similar entrancing lushness of the environment is fully felt, even if Andrei Tarkovsky’s seminal, cerebral sci-fi classic is still in its own league with its patient pace and contemplative existential quandaries. Hardy even breaks the 180-degree rule a few times for proper disorienting effect, leading up to a bold finale that–despite a few brief moments of shaky CGI-–is a go-for-broke 2001-inspired sequence of psychedelic rapture.

Returning after Ex Machina, Portishead’s Geoff Barrow and Ben Salisbury’s score mutates from acoustic guitar plucks to an electronic-infused acid trip to reflect the ever-evolving journey into the peculiar. In another inspired choice by Garland, Crosby, Stills & Nash’s “Helplessly Hoping” is even laid over a moment of heartache-turned-joy, and works better than it should.

With its seat-rattling sound design and a visual boldness virtually missing from the tentpole arena, it’s a shame the vast majority of countries will not be able to see the film in a theatrical setting as intended (e.g. everyone outside of the U.S., Canada, and China). Given that the entrancing thrills of the story and the mystery of Area X would have made it accessible to a wider audience beyond its more cerebral delights, it’s a particularly distressing sign for future large-scale, daring filmmaking that Paramount went the risk-averse route and sold off most international rights to Netflix.

In Sunshine, Garland melded mesmerizing cerebral sci-fi with an emotional backbone. With Annihilation, which feels like a spiritual cousin to Danny Boyle’s film, he crafts a third act that skirts convention and erects a thought-provoking mirror to question the essence of humanity’s soul. A shimmering example of what Hollywood sci-fi can achieve when the aim is high, Annihilation is a gripping, mystifying adventure and proof that a transportive experience is more rewarding than a story with clean-cut resolutions.