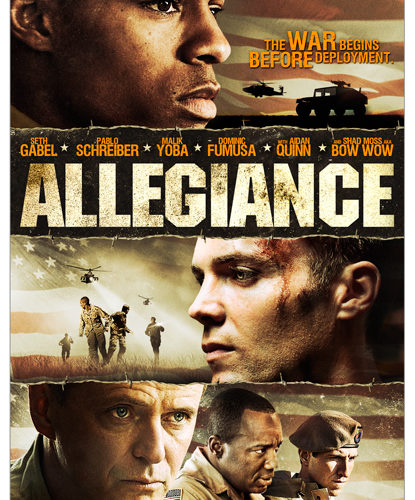 Not all short films should be given the feature length treatment. What works on a small, concise scale often finds itself expanded beyond its capabilities, not necessarily failing because the additions don’t fit the central conceit but because they ruin the original impact through superfluity. I haven’t seen Michael Connors‘ award-winning short Recalled—although I’d very much like to now—so I can only infer it succeeded where his new variation on the story, Allegiance, falters. The universal themes brought to the table in the context of a military setting like respect, honor, empathy, and loyalty do still resonate, but I can’t help wondering if they would have hit harder without the generic suspense/thriller tropes preventing the audience to really dig deep into the more personal tale beneath. Connors’ character development is his strongest suit. We’re dealing with a very tough time in America’s history when the government needed to deploy members of the National Guard—some who signed up to work weekends—into the kill zone of Iraq. Some treat the responsibility with trepidation despite knowing they must fulfill their mission; others find fear and a sense of being slighted as reason to escape; and the rest are caught in the middle trying to follow the rules but getting punished for doing so. This is the triangle built by Lieutenant Alec Chambers (Pablo Schreiber), Lieutenant Danny Sefton (Seth Gabel), and Specialist Chris Reyes (Shad “Bow Wow” Moss). What occurs between them isn’t personal, but human compassion and the dichotomy of rank cannot overlap. The right choice isn’t always the correct one.

As a result, the plot is an impossible situation to comprehend let alone find a solution. These men enlisted to secure our borders and assist in the cleanup after 9-11, not fight overseas. So what do you do when your world is turned upside down? If you have an out, do you take it? For Lieutenant Sefton, the nepotistic opportunity to stay home with his fiancé may look cowardly on paper but most would have done the same if given the chance. His decision therefore leads to a mixture of pity and disappointment as we watch his men’s inevitable reaction twelve hours before shipping off. They must now go without one of their leaders and the soldier replacing him—Chambers—must uproot a civilian future to return to the country he thought he left behind. Neither fact is lost on Sefton. So when Reyes’ plight reaches him, the guilt ravaging his soul makes the criminal act of helping someone go AWOL an acceptable risk. Sefton already did what he could to give his medic a legal leave of absence after his son was diagnosed with a six-month life expectancy, but Lieutenant Colonel Owens (Aidan Quinn) refused it because the company needed him more than his son. Does Reyes deserve to potentially never see the boy again with an eighteen-month tour staring him in the face? Does the threat of jail time for Sefton help counter the selfish betrayal his men are accusing him of making? It’s loyalty to your men versus loyalty to the job versus loyalty to your family. And when your options are jail, possible death, or shame, you have to realize it’s no longer all about you.

The internal wrestling with whether or not Reyes going AWOL is forgivable becomes the point of contention all involved must confront. For tough guys Gonzo (Gavin-Keith Umeh) and Willie (Corey Hawkins) it’s a no-brainer to do what their hearts say is right; Sefton and Sergeant Kraft (Jason Lew), both of whom have escaped Iraq, straddle the fence until needing to make a definitive choice; and Captain Angelo (Dominic Fumusa) and Staff Sergeant Hart (Malik Yoba) show compassion, know the pros and cons of their decision, but will never compromise the chain of command so integral to their survival in times of war. Each man follows a code and some are willing to bend it. Watching each reach that point is what makes Allegiance a worthwhile view. Thoughtful characterizations and commendable performances only go so far when what’s working as an intimate exposé of the rank and file facing a gut-check moment of utilitarianism tries to become a taut thriller against the clock. Honestly, it doesn’t matter whether Reyes escapes or not, the interesting dynamic lies in the deceit perpetrated to give him the opportunity. Suspense is needed when it comes time to smuggle a soldier off the base, but turning it into a manhunt prison break is a bit much. I loved quieter moments of Fumusa reconciling his feelings and duty when questioning Gabel and Gabel himself excelling at the jaw clenching uncertainty of his actions. So much works naturally that the heavy-handed drama like comparing/contrasting Sefton and Chambers becomes a blatant eyesore.

Are these two Lieutenants separated by ideals of honor? Does one have more to live for or is he simply too afraid? Again, it doesn’t matter. Schreiber’s character is a complicated one and that fact is appealing, but Sefton doesn’t need more reason to feel guilty. Connors expands his sixteen-minute short with too much redundancy and a mistaken desire for action that sadly overshadows the humanity of enlisted men goofing around and doing whatever it takes for their brothers. Bow Wow and Gabel portray good men trying to do right by their families, but they must acknowledge Alpha Company is important too. Staying home or dying in the desert is meaningless if the reasons aren’t right and by the end a couple knowing glances prove they finally are.

Allegiance is now on VOD an will hit limited release on Friday, December 28th in New York City and continue in LA and Austin on Friday, January 4th.