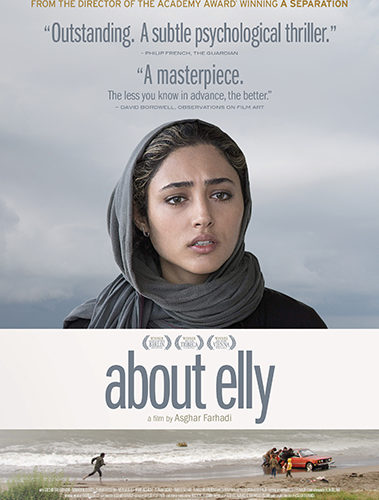 On group vacations, minor inconveniences are common: a car rental company doesn’t have the reservation, the weather isn’t cooperating, a bed isn’t comfortable. The camaraderie of a group however often compensates for those setbacks. In About Elly, the group dynamic quickly sours when vacation mishaps become serious and a young woman goes missing at sea. Lies are told and each member must decide if they want to stick together or stand apart. Acclaimed writer-director Asghar Farhadi (behind the Academy Award-winning drama A Separation) spins a complicated narrative yarn where moral choices are convoluted for the characters and nothing but engaging to the audience.

Premiering back in 2009, but finally arriving to the United States today, the story follows old college friends gathering for a vacation along the Caspian Sea. Most are married and have kids — save for one single man, Ahmad (Shahab Hosseini), who is newly divorced. 20-year-old Elly (Taraneh Alidoosti) was invited as a potential set-up with Ahmad, but she disappears while watching the children swim. Elly is presumed missing at sea but, soon, the group learns more about her, leading them to think she may have left the trip purposefully. What at first seems like a pleasant trip among friends soon turns into a mystery-suspense with lies and deceit falling upon each other. With the character of a play, Farhadi’s story is set in a confined setting with many characters expressing their opinions over one situation. There’s a feeling of urgency and confinement, not too dissimilar to Sidney Lumet’s 12 Angry Men. However, in that film, the jurors were strangers arguing over a case in which they had no personal stake; in About Elly, the ensemble consists solely of friends, and, at that, a group that arguably has a level of involvement in her disappearance and possible death. In effect, this beach house setting could be a courtroom, where we, the audience, act as jury, hearing each side to the tragedy.

Minor twists and turns abound, keeping us on our toes. Eventually, the mystery is revealed, but it’s difficult to attribute guilt or innocence to any one party. Perhaps that’s partly due to Farhadi’s masterful camerawork with his ensemble cast, which seems to give equal weight to its various members.  Characters move in and out of frame, and while one pontificates in the foreground, another is mulling over the case in the background. Performances are also uniformly ingrained and naturalistic — some characters express anguish, others nervousness and outright anger. It’s potent filmmaking and an intriguing puzzle to piece together.

About Elly is now in limited release and will expand in the coming weeks.