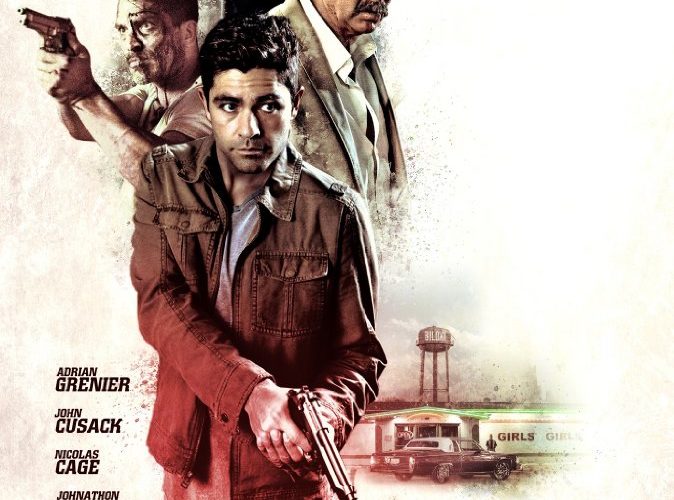 As a piece of filmmaking and storytelling, Arsenal is, at its best, marginally competent in the way that a basic-cable crime procedural might be. It attempts grindhouse-level bloodiness that is excessive enough to expose the effort but also not quite excessive enough to bring the gore hounds running. At its worst, the film makes it clear just how low it’s aiming and how lacking in ambition it is. Rather than striving to come up with anything new—or at the very least innovative—it contents itself with wading through a sea of hackneyed tropes. The characters’ arsenals may be jam-packed with things that zing and explode, but the movie’s own is frustratingly empty.

Mercifully, only a narrow swath of clichés make it into the film’s main plot — a man named JP (Adrian Grenier) must pull together $350,000 to save his criminal of an older brother Mikey (Johnathan Schaech), who has been kidnapped for ransom by a mob boss from Mikey’s past (Nicolas Cage) — but the film’s total runtime is awash with a much greater variety of triteness.  For starters, not only is Mikey a criminal, he is a sympathetic criminal, the kind of tough guy who is just bad enough to fit the anti-hero mold but not so bad as to eliminate the possibility of easy redemption. We see his good side in his desire to spend time with his daughter, who is under the guardianship of his ex-wife, because what is “drama” without a custody battle? To make matters sillier, the daughter is shown to be pursuing a dangerous lifestyle by hanging out with meth users, which would have been ample confirmation of Arsenal’s status as a third-tier soap opera, but to stop there would be to overlook the treatment of the brotherly relationship at the film’s center. Arsenal makes sure we never forget that, despite Mikey’s extensive criminal record and ongoing proclivity for violence, JP would die for him because, lo and behold, blood runs thicker than the ink of the law.

The last of these trips down the memory lane of half the crime movies ever made actually produces some poignancy, such as in a toast JP makes to Mikey near the beginning of the film. But, alas, for every one of Arsenal’s moderately good moments—a giddy, slo-mo shootout is one personal highlight—there are two aggressively bad ones. In one of the film’s more puzzling sequences, Mikey is robbed of his stash of coke at gunpoint and proceeds to torture one of his old buddies for information on the burglary. The time spent developing this plot point proves to be for naught, however, as this remarkable chain of events is, incredibly, never mentioned again, except for once in passing. In another instance, JP, when entreated by his wife to leave their hometown of New Orleans, passionately says that he will not run because this place is his home. This is all well and good, except home had never been cited as a source of motivation up until this point, neither in the dialogue nor in the bland cinematography. When Hurricane Katrina is then suddenly invoked, the scene smacks of a film trying too late to establish a sense of place within its airless universe.

Indeed, the central tension in Arsenal ultimately lies less in Mikey’s predicament than in the tug-of-war between staunchly average filmmaking and the various awful moments that threaten to derail our rudimentary enjoyment of the sporadic passibility. The film’s mild commendability would certainly have lost out if not for the assistance of Arsenal’s biggest selling point and the closest approximation to a saving grace: Nicolas Cage. This man is something else. Like a half-asleep, braying walrus with a wooly mustache, a same-shaped mop of brown hair and a nose stuffed to bursting with coke, Cage plays Mikey’s captor, and he is completely mesmerizing. His performance is a far cry from realistic, feeling disjointed from the emotions that plot-level circumstances suggest his character should be experiencing, but neither could his acting be called “theatrical,” because theatricality entails having some standard of realism as a baseline. Realism is irrelevant to the onscreen Cage because this man does not exist in our reality. He is not above or below the baseline but a lateral step away from it, operating in his own dimension and by his own logic. Some may call Cage’s acting lazy, and they wouldn’t be wrong. By many standards, his performance in Arsenal is pretty terrible. But it is also sublimely anarchic, a big middle finger to any acting method you throw in his direction.

This thick-skinned approach to idiosyncrasy has been central to the creation of Cage’s mystique. Within the past ten or so years, the actor has churned out an average of four or five movies a year, with six being slated for release in 2017. At almost every turn, he’s been met with derision, and yet he marches on like time itself, unmoved and rather tremendous because of it. In reprising his own trademark of being full-throttle bonkers and self-aware about it, Cage elevates Arsenal, imbuing the film with a tongue-in-cheek quality that invites us to find genuine humor and verve in moments we might have otherwise dismissed as unintentionally comedic. The danger here is, of course, that we might read genuinely bad scenes as “ironic” and hence worthy of praise. Filmmaker intentionality aside, what is indisputable is that Cage’s presence makes Arsenal more fun than it would’ve been.

In light of how riveting Cage is in this film, it is a shame that he doesn’t appear more. Though he is far and away the best part about Arsenal, his scenes are relatively few, with the majority of the screen-time being allotted to JP and Mikey. Still, even a tiny dosage of Cage in one’s system can exponentially jack up one’s experience of a film, and though the ensuing high isn’t all that high given how low Arsenal was to begin with, the effect is still felt.

Arsenal is now in limited release and available on VOD.