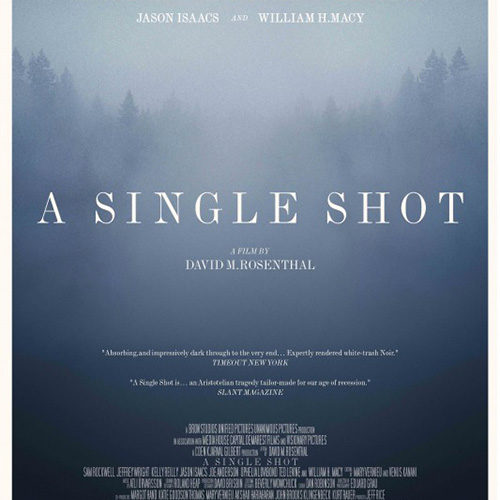 It’s a shame most people need an incident that risks taking their life to finally acknowledge they have one left to live. For John Moon (Sam Rockwell), this moment comes on a morning hunt like many others. Already with three arrests for poaching deer, this specific excursion finds his aim off. Needing to chase his mark and eventually shoot blindly at movement in the corner of his eye, the kill lying motionless and choking in blood opposite his barrel comes into focus as a young woman. Desperately—futilely—trying to help her hold on, John becomes panicked to figure out what to do. That’s when he sees the box of cash by her side, decides to apologetically hide her body in an abandoned truck container, and continue on home to hopefully forget.

The money gives screenwriter and novelist Matthew F. Jones a reason for John to try and mend the broken fence with his wife (Kelly Reilly’s Moira) and son after a string of bad luck and little work pulled them apart. Already twenty days past due on signing the divorce papers she had drawn up, he hopes he can win her back now that the reclusive life he adopted after his father’s farm was foreclosed on could come to an end. It’s never that easy, though, and her confusion as to where the money came from won’t help matters either. But even worse is the fact his small backwoods West Virginia town is ill suited for secrets, causing the arrival of an out-of-town stranger (Jason Isaacs’ Waylon) to become the least of his worries.

Directed by David M. Rosenthal as a contemplative thriller rather than the cat and mouse chase the synopsis would like us to believe, A Single Shot proves to be a mood piece set within a highly volatile location where everyone has a price. It doesn’t take long for Waylon’s local partners to figure out John is their likeliest suspect, so it’s no surprise when his dog is shot in his front yard and a rock wrapped with a note threatening his wife and child comes barreling through the window. But none of this puts him “on the run” as many descriptions seem happy to imply. No, he actually finds himself unwittingly looking for them in order to get answers and protect his family as Waylon’s net tightens until there’s nowhere left to go. As a result, the plot itself doesn’t necessarily give us anything we haven’t seen before. John becomes embroiled in the unknown crime that acquired the cash in the first place, finding that he needs to deal with its chaos above the guilt and remorse for the homicide he actually committed. He wife and child fall off the map, he visits his son’s babysitter Carla (Amy Sloan) to find out where her creepy boyfriend Obadiah (Joe Anderson) may be, and begins to discover the bigger picture as another body falls and a phone call is made to explain how even his friends may be plotting against him. And it all couldn’t have happened at a worse time with the man who bought his family’s farm (Ted Levine’s Cecile) offering him a long-term job.

That’s the sort of fateful way things play out as cause and effect relationships unfold to connect every character we meet together. Luckily, amidst these contrivances lays a captivatingly atmospheric mood and some fantastic performances to hold interest. Rosenthal imbues an almost elegiac quality that shrouds every frame in a brooding solemnity where the thought of a happy ending cannot exist. John’s fantasy life of working land with wife and son in tow is long gone by the time we meet him. No, the defeated laziness that drives him to his accidental crime and the greed stemming out of it are merely his wake up call to ensure those he loves can live their dream without him. A Single Shot shows John embracing the role of protector he wouldn’t hold in the past. Rockwell gives a fantastic portrayal of this internal decision to stay and fight despite being the man who always used to run away. As those he trusted prove to be in bed with Waylon, he realizes Moira and Nolan are all he has left. Cecile and his daughter Abbie (Ophelia Lovibond) are kind and generous to him too, but they exist in a world beyond his reach. John Moon isn’t inside this selfish and violent world of deceit by mistake and if circumstances were changed might have even been in on the plot for that money in the first place. The fact he wasn’t didn’t stop him from becoming a participant in the long run anyway, but it did afford him the opportunity to try and make sure no other innocents got sucked in too.

It’s a gritty and emotionally resonate role tinted by an overwhelming sense of guilt. But while he’s given ample time to earn his pathos, the supporting players unfortunately become caricatures. They’re effective caricatures, though, as each entertains in their limited screen time. William H. Macy hams it up as Moon’s dead-armed (Polio?) lawyer Pitt while Anderson and Isaacs push menacingly dangerous to extreme heights with the latter proving uninterested in anything but personal satisfaction. And even though Jeffrey Wright’s Simon borders on over-the-top, his run-down drunk exudes an authenticity only matched by Rockwell’s lead. Simultaneously pitiable and unforgivable, he and John are identical men caught on opposite ends of this game. The demons of past transgressions weigh heavily on both—one escaping into the bottle as the other rediscovers love to seek penance.