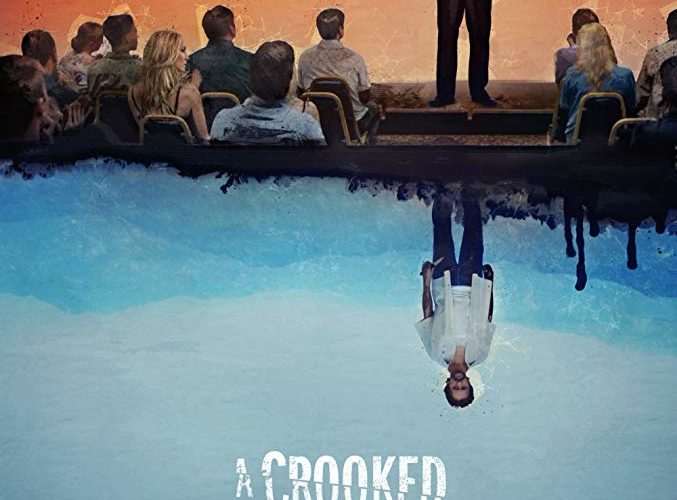 Review: ‘A Crooked Somebody’ Depicts the Myriad Ways We Take Advantage of Others

There’s a line that our actions can cross when our desire to help others turns into helping ourselves. And it’s often difficult to see when you’re the one falling prey to this hubristic vanity masked as good will. Outsiders don’t have a problem recognizing the shift, though. They only see a charlatan and victim too distraught with pain to discern truth from what they want to hear. This is why there will always be a con artist, mark, and disgruntled bystander catching the trick with a glimmer of respect or sea of rage. And the fork-tongued liar often believes he/she has one card left to play. It’s this desperation that turns a “sure thing” into a crapshoot. Sometimes the predator gets lucky and sometimes he/she becomes the mark.

Which will it be in Trevor White’s A Crooked Somebody? The answer isn’t mine to give. Screenwriter Andrew Zilch may follow common tropes along his path to its end, but he never settles for cheap tricks when a road towards emotional upheaval remains available. Because even though Michael Vaughan (Rich Sommer) is a fraud, his “psychic medium” retains a posture of empathy as long as there are believers. It exists with skeptics too, albeit the other way around. Michael’s preacher father (Ed Harris) might not believe the game, but he still believes in the man he raised. This relationship could be construed as pity, but I’d argue empathy still works. To know a loved one’s luck will eventually run out is to understand the inevitable anguish to come.

We meet Michael at a low point: a hometown-adjacent show attended by a meager audience too cheap to buy his book without Amazon pricing. Few take his showman’s bait, his father stands in the back (waiting to present a job opportunity devoid of “spirits”), and his resolve wavers. He argues with his partner (Joanne Froggatt’s Chelsea) afterwards, drunkenly and angrily quitting with an exaggerated declaration that he won’t be joining her in Tucson the next morning. She seems used to this sort of crisis of faith, prepared even considering there was always a chance his disappointed father would come without empty praise. But Michael isn’t lying this time. He doesn’t show at sunrise. It isn’t because he didn’t want to, however. Getting kidnapped literally tied his hands.

Meet Nathan (Clifton Collins Jr.), a disturbed gentleman who believes Michael’s talents so fully that he must kill him. He thinks that a man he accidentally murdered two decades previously showed Michael what happened. And while guilt consumes him to the point of asking his victim’s spirit’s forgiveness through his captive now that he has the chance, loose ends must be dealt with promptly. It’s lucky then that Michael is an expert in persuasion. He can talk himself out of the direst circumstances by feeding his abuser’s every whim, using their weaknesses against them. So he explains that Jim (the deceased) wants to see his daughter (Amanda Crew’s Stacy) again and hopes Nathan will help him do so while also exorcising the demons he’s held for too long.

This is where Zilch presents that line I spoke of above. He asks the question, “What if Jim wasn’t a nobody?” What if the little girl his “disappearance” orphaned became America’s sweetheart tragedy case with a name that still meant something twenty years later? Michael sees an opportunity. He can win Nathan’s trust and eventually escape with his life or he can use the information his kidnapper provides about an unsolved murder to legitimize his work. In his mind there’s a way to spin this whole ordeal to everyone’s benefit. He can give Stacy the answers that have haunted her entire life. He can calm Nathan’s soul by giving Stacy closure. And he can do it within a full media circus — accumulating the worldwide celebrity he’s always craved.

A Crooked Somebody develops into a resonant character study depicting the myriad ways we take advantage of others. It’s about the white lies we spin to justify actions we know aren’t quite justifiable because we assume everyone else is doing the same thing. But Michael’s Icarus is too optimistic about his skillset. He’s too confident in what he believes is a victim-less stunt rather than a legitimate crime. His sense of invincibility grows with every success and opportunities to change course ever so slightly and still achieve his goals come with every failure. So what if he has to “perform” for a few strangers to keep a lid on the expanding web of deceit he’s constructed? As long as he becomes the hero, the journey taken is inconsequential.

We get so embroiled in this ruse that we start to forget Michael is harboring a fugitive from the law. We’re so invested in his evolving ploy for notoriety that the initial roles of antihero and villain inevitably trade places. The kidnapper becomes the kidnapped; the oppressed becomes the oppressor. And as Sommer’s portrayal turns from harmlessly smarmy to opportunistically callous, Collins Jr. moves from spooked predator to emotionally ravaged victim of his own conscience. The latter is easily the best part of the whole, his Nathan’s resolve disintegrating before our eyes as Michael’s unhinged scheming forces him to confront his past as an open wound never to close again. It’s a role that reminds you just how under-rated an actor Collins Jr. remains despite his extensive résumé.

Nathan’s vulnerability and remorse is key because they reveal the reality that he, like Michael, is far from a reliable narrator. Zilch is therefore able to continuously expose new twisty details despite what always appears to be a rather straightforward plot. The script proves deceivingly complex not because you can’t guess what’s going to happen, but because you can. White and the actors do a great job ensuring that we understand who these people are beneath their place in the plot. Our intrigue is less about what they do and more about why they do it and what they learn. Whether or not Michael succeeds in accomplishing his selfish goals, he will help the others by making them face truths they’ve long ignored. There’s authenticity in everyone’s certainty.

There are also some good laughs thanks to Sommer’s ability to look like he’s weighing each angle (a trait that made his “Mad Men” character so wonderful to condemn) and a fun supporting cast including Randee Heller’s gullible motel owner Phylis and the overtly sarcastic-while-looking-for-an-edge detectives Zimmer (Paul Ben-Victor) and Banning (Michael Mosley). White and Zilch leave a door open for every character and every action to fall in line with Michael’s ruse or make it so the whole thing implodes in his face. They allow each person Michael confronts to be too naïve or too trusting in order to place him willfully on the edge of a steep cliff for the entire last act. Will he push those at his side over or jump? Watch and see.

A Crooked Somebody opens in limited release Friday, October 5th.