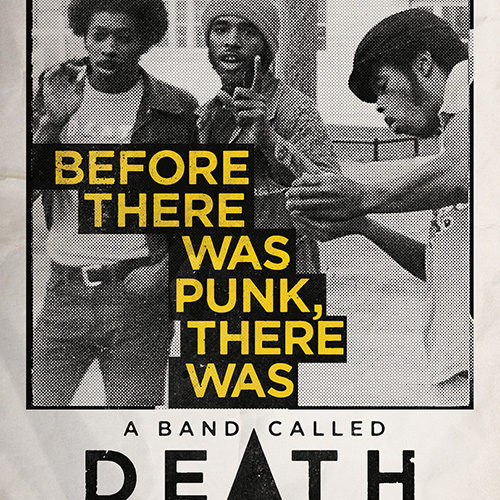 It took thirty-five years before proto-punk outfit Death’s guitarist, spiritualist, and uncompromising leader’s prophetic words came true, but the world finally came knocking. David Hackney didn’t have much time left on this earth when he brought the original United Sound Studios masters from Detroit to his brother and bandmate Bobby in Vermont, fully aware he’d never see the success he knew was trapped inside their music. After years of rejection from playing too fast, being a black rock group in the 70s, or picking an ominous name that couldn’t help but scare people away, the Hackney brothers’ legacy appeared over in the 80s when David moved home and Bobby and Dannis stayed in New England to form reggae group Lambsbread. Like all great things, however, genius is never lost forever. Children of a Baptist minister in the Motor City, the Hackneys credit their parents’ never wavering support as the inspiration to follow their dreams. As Motown surged and their religious neighborhood gravitated to its soulful tempos, these boys listened to Alice Cooper and The Who on the radio before bedroom jam sessions from 3-6pm shook the walls each night. David worked tirelessly to strip their funk rock sound to its purest form and the music became faster and harder until people walking down the street had to cover their ears and call the police. An injury settlement won by their mother became the money used for new instruments and the sorrowful pain of their father’s untimely passing provided the concept and name for their journey. The spring of 1974 arrived and Death was born.

The importance of what this trio created is shown right at the beginning of Mark Christopher Covino and Jeff Howlett’s documentary A Band Called Death from the praise of Cooper, Kid Rock, Henry Rollins, and more. But it’s Questlove’s declaration later on about the Hackneys being The Ramones two years before “Blitzkrieg Bop” that sends a shiver down your spine. How would the landscape of music have changed if David gave in to Clive Davis’ request to change the band’s name in return for a record contract? How would “Politicians in My Eyes” and “Keep on Knocking” have influenced punk rock differently than where The Ramones took it? Theirs is a sound that predates its stylistic contemporaries and yet it collected dust while the rest started a revolution. The camera follows Bobby and Dannis as they return to Detroit and relive the memories of their youth. We see the house in which they found their calling, hear from old neighbors who remember the music pulsing through its walls, take a tour of Don Davis’ Groovesville Productions, and quickly understand the powerful talent their brother David held. The origin of the band’s triangle motif is discovered in a photograph of clouds, a visual representation of the elements taken by a man who literally poured his life into music the world simply wasn’t ready to hear under such a dangerously charged moniker. Weaker men would have sold out instantly—Bobby and Dannis among them—but David’s idea for Death meant too much for outsiders to erase. He chose his path and his brothers followed.

Covino and Howlett construct a comprehensive look into the Hackneys’ musical trajectory that’s the stuff of legend. From garage rock beginnings to a troubled genius at the helm to an eventual compromise leading to disbandment, alcoholism, and transformation, you couldn’t write a better tale. To see the pain in Bobby and Dannis’ faces as tears well up recalling David’s strength and courage takes an emotional toll just as the hindsight knowledge of their music’s greatness boils your blood when listening to stories about every closed door they faced. Accompanied by subtly animated photography and vintage film, the surviving brothers talk about a failed album as The 4th Movement deemed too preachy and the modest success Lambsbread has earned while putting down roots, but the exhilarating true miracle comes later. Origin stories are always intriguing and Death’s is no exception once we see how loving and compassionate these brothers are. There was no malicious power trips or any tales of sex and drugs getting in the way—it really was all about family and the music. A big part of this lies in their religion and while the spirituality David conjured for his art is captivating, I won’t lie and say Act Two doesn’t slow down when dealing with the Hackneys’ mounting losses. This familial progression is key to the 2008 rediscovery of the band in San Francisco, however, so it definitely warrants inclusion if only to introduce Bobby’s sons Bobby Jr., Julian, and Urian and their part in the saga. Watching the band reach the heights it never could in the 70s is worth it.

Equal parts fate, luck, and the internet, it’s amazing how flat the Earth has become as far as the speed at which we connect with one another is concerned. One man’s gift of a classic 45 turns into another’s eBay victory while a third’s blog posted MP3 rips spark a movement that reaches Drag City Records for an album release. West Coast clubs spinning vintage vinyl start playing the tracks in public, sons who never knew their father was as cool as he truly is enter with eyes wide and mouth agape, and the words and actions of David prove more correct than he ever could have imagined. While the Hackneys may have missed their opportunity to help originate punk rock, they are no longer in the shadows and their music lives on.