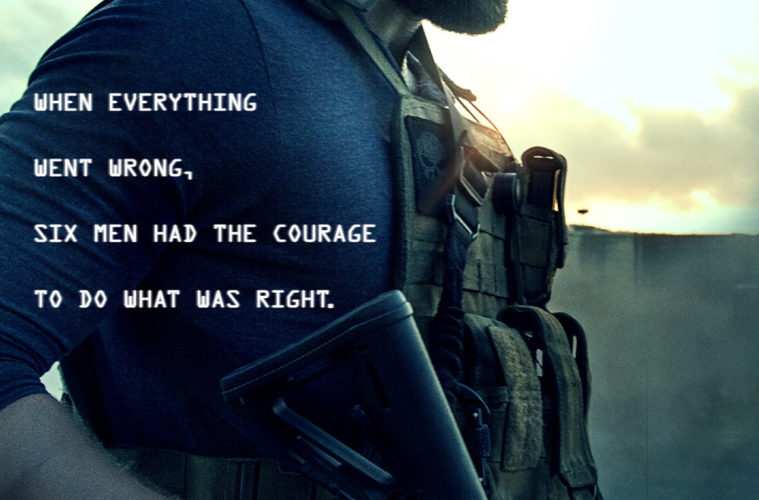 For better or worse, 13 Hours: The Secret Soldiers of Benghazi is the purest distillation of Michael Bay’s cinematic voice. Bay’s favorite themes recur here from his brand of cheerleading GI Joe patriotism to righteous bloodlust to endlessly off-color non-sequiturs. And years of carpet bombing criticism targeted at his continued lack of political correctness and subtlety have done nothing to stymie Bay’s bold, elephantine style. And Bay’s world views have cannibalized themselves on such a grand stage that his movies have now been elevated to the level of metatextual explorations of American masculinity.

Based on Mitchell Zuckoff’s meticulous novel Benghazi: The Inside Account, 13 Hours recounts the events of the Benghazi incident of September 11, 2012 when a Libyan diplomatic outpost and CIA compound were attacked by Islamic insurgents, leading to the deaths of an American ambassador and a number of American soldiers. The particulars of Benghazi have not only been hashed out in partisan battles, but have become an ongoing battle in the court of public opinion.

Given the sensitivity of the subject matter, Bay’s maximalist approach doesn’t exactly meld with the scalpel precision needed for a story that weighs at least a dozen competing political contexts, but viewed through the lens of Bay’s over-the-top action fantasies, 13 Hours is a fitfully successful exploration of masculinity and powerlessness.

Bay’s primary concern has long been about manhood. But as much as he’s enamored with exceptionalism, of scenarios where human beings are forced to push past a breaking point; he’s equally concerned with the powerlessness of these situations. Like Odysseus, the main characters of 13 Hours are less concerned with losing their life than in the possibility that their wives will replace them. Even a quote from Joseph Campbell, the pioneer of the “heroes’ journey” serves to bookend the movie.

These are six men who are exemplars in the field with decades of experience under their belt running covert ops. They’re trained experts who are de-mythologized, worrying about everyday problems like paying life insurance and landscaping. They’re heroes, but they’re plagued by the problems of everyday people. John Krasinski, best known for The Office, plays the film’s main perspective, Jack Silva, a career soldier who’s forced back to Benghazi for one last dutiful go-around. He’s surrounded by a gallery of of manly men led by James Badge Dale as Tyrone Rone Woods, a jaded but boisterous senior security operative.

The other characters are barely interchangeable as they’re all variations on the bearded alpha-male types although Pablo Schreiber (The Wire, Orange Is the New Black) is singularly obnoxious as a clenched, vulgar hothead who’s shown to have difficulty with professionalism. They’re all self-described meatheads, urban philosophers whose last words will be quotes they don’t even care to source. Krasinski’s character is stolid, but he’s an obvious softie, reminiscing back to moments that neatly establish the stakes with lines like, “we don’t need a treehouse in their backyard, we need you.” With his thousand-yard stare and the enveloping melancholy of his face, he’s a surprisingly snug fit for the dramatic hero archetype.

Libya is a sleeping giant in the movie, a country that’s faced the brunt of a revolution, but holds vestiges of an angry public. Cultural ignorance isn’t so much a feature of these heroes as an ingrained state of being. There’s been larger reported discussions about how the men involved admit that they felt zero passion about either the war or the people of Libya. Whether or not it’s adapted from the text, Bay’s characters speak about Benghazi with the palpable affection one would show to a burning garbage dump.

Like many of Bay’s movies, 13 Hours is soiled with a bullying ethnocentrism. Over and over, the script peppers in lines about Benghazi’s tortured state as the status quo – of neighbors watching television undisturbed by the pelting sounds of gunfire all around them, or of emerging extremism as an escape.

It’s disturbing to see a movie that has so little interest in presenting the enemy as anything other than target practice. Even last year’s similarly jingoistic American Sniper managed a perfunctory but visible humanization of its main antagonist through the hinting of an interior life. The citizens of Libya exist only to be the ones shot at, shooting, or otherwise humiliated for their birthright.

But even if the script is enamored with insulting language about the country, Bay clearly loves it as a setting of goosed historical significance like The Alamo, or the cinematic lineage of last stand classics like Rio Bravo or Assault on Precinct 13. But more often than not, video games seem to be the predominant influence.

Bay’s filmmaking so fully resembles the last generation of first-person shooters (which coincidentally, gratuitously cribbed from his older films), from the smarmy punchlines that sound programmed to triggers to a swooning overhead camera that the movie may as well plaster a kill count in the bottom corner. It’s hard not to imagine an early close up on someone playing Call of Duty as a wink. Bay’s action scenes continue to be a gardener’s worst nightmare as landscapes are blown up into raining soot and rust. Dion Beebe lensed the film, and a slick veneer of grime is the prevailing visual aesthetic of 13 Hours. The movie looks stuffy and earthy in all the right places.

Bay’s continuing passion for technology translates into some remarkable vantage points whether it’s the lucidity of drone photography or the slick hud of predator missiles. Bay’s toys are nearly peerless. And while handheld photography has lost some of its luster over time, there’s still a purity to the camera sprinting alongside a subject. Bay still has ever the eye for composition, even if his subject matter is less inspiring than the framing.

These are similarly superhuman men who say things like “no one can survive that” before sprinting through a treacherous path. And even as the majority of social politics end at a country of terrorists and victims, there are isolated lines that have a life of their own. In particular, there’s a period in the middle of the film where the enemies are hiding in plain sight, making every single passing person totally anonymous and a possible enemy. It’s a genuinely tense moment as the camera waits patiently for the gunfire to resume.

Even the dialogue brings in this uncertainty as a character says, “I’m not a bad guy, but I know the bad guys.” It’s an incredibly revealing line, and one that gets at the way that civilian and insurgent is a gray line in Middle Eastern countries.

Bay’s a director who eulogizes history by leaning into it, not stepping away. Characters don’t just die, their effects float in the air in slow motion. And Bay never fails to describe his characters’ motivations, whether its lengthy isolated emotional moments with family members or extended views of photographs. He cares so much about these dumb, unlikable, one-dimensional characters. And he’s exceedingly reverent to their emotional beats, which are as baldly sentimental as ever with tearful goodbyes even as characters squirt out with squibs that look like something from Re-Animator.

Political or moral outrage will become the battleground of quality for this film. But even looking past the objectionable subtexts, there’s very few reasons to rationalize the storytelling here even as a look at masculinity. Bay clearly wanted to make a movie that honored these men, and viewed as a fantastical elevation of these character, it’s undeniably powerful. But far too often, 13 Hours invalidates its own purpose, trading a harrowing story of courage for a tour of carnage.

13 Hours: The Secret Soldiers of Benghazi is now in wide release.