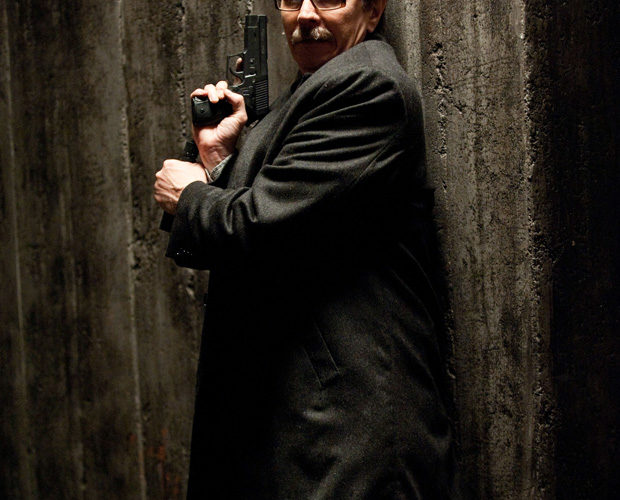 Can you believe it? In just a single week the most-hyped movie of the year will actually be in theaters for all to view. But Warners Bros. isn’t letting up on the marketing for The Dark Knight Rises just yet. We’ve got a batch of new stills, with one in particular (above) being the most mysterious, as Anne Hathaway‘s Selina Kyle takes (someone else’s) aim to fire away. The rest, some having already been spotted elsewhere in non-pristine form, feature many of our other players. But most interesting of all, we have new details of the most exciting technical element tied with Christopher Nolan‘s blockbuster.

A New York Times article dives into the IMAX portion of the film and aside from confirming an official runtime of this large-format footage, many fascinating details were unearthed. While The Dark Knight featured about 25 minutes of action and establishing shots using this format, there is a confirmed 72 minutes of IMAX runtime included in its sequel (out of a total 165 minutes). This will, of course, break the record of IMAX usage in a feature narrative film, by a large margin. For those wondering just how big of a difference this makes, check out the stills below, with the top showing this 70mm IMAX format and the latter, showing the regular 35mm print. Around 10 times larger and twice the brightness of regular screenrs, there’s more detail in this expansive format, and one can see it’s not as cropped as the 35mm format. Nolan also expanded on why he and cinematographer Wally Pfister love the format so much, saying, “the sharpness and the depth of the image, projected onto those enormous screens, is simply the best quality image that has ever been invented.” The duo didn’t have a set plan on which exact scenes would be shot in the format, but made sure to always have an IMAX camera by their side. They ended up using it more than they imagined, but could only shoot three minutes at a time.

Despite some of the negative elements associated with IMAX cameras – including loud noises while filming and size of the equipment – Nolan added, “when you’re talking about this large-scale studio filmmaking, the size of the camera is pretty irrelevant compared to the massive difficulties and the massive resources you’re wrangling on a daily basis. And so having this extra image quality, giving the audience the best possible technical look at what you’ve shot, is the obvious thing to do.”

Even when it comes to editing, they even kept the format in mind. The film switches back and forth from 35mm to 70mm IMAX, with bars appearing on the top and bottom as it goes back to the smaller format. In one shot, the filmmakers conceal this as, “a gate slams down, and the screen goes from standard to IMAX within the shot.” Pretty neat. It’s exciting stuff when the biggest blockbuster of the year also does so much to push technology, and not in a 3D aspect. As we wait seven more days, check out those new photos below and more details on IMAX in the NYTimes article.