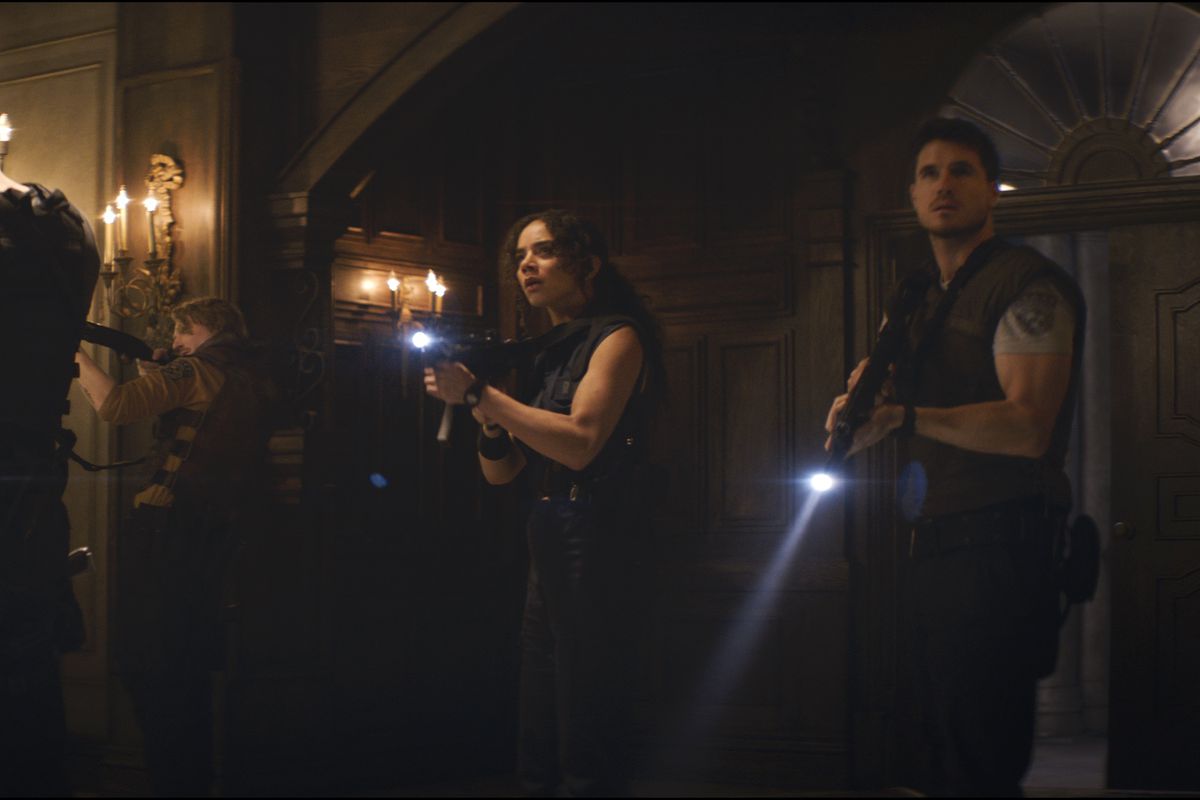 This writer can’t really speak with authority on the Resident Evil game franchise—my only experience was putting down the Wii controller on the fourth installment almost immediately after being too scared. Yet if one had to guess, the iconography seems pretty well-encapsulated in a 1997 Japanese ad directed by none other than George A. Romero. That simplicity (a girl, a gun, a jail cell, zombies) seems to have been ignored by Paul W.S. Anderson’s unwieldy, extremely enjoyable six-film series, so even as a non-gamer there was some understanding Resident Evil was not done as a movie franchise.

There seemed some promise with director Johannes Roberts, who has the rare combination of being a huge horror geek and intelligent filmmaker, with visually accomplished, entertaining B-movies like Strangers: Prey at Night and 47 Meters Down under his belt. Unfortunately, his reboot Resident Evil: Welcome to Raccoon City feels like a lot of good individual ideas that don’t cohere into a fun movie. If a beautiful shot of a helicopter’s headlights over pine trees at night reminds you he’s a real filmmaker, the work in toto is never particularly thrilling or scary, whatever its emptied rounds and stabs at atmosphere.

One fault is its structure, which apparently conjoins plots of the first two games. Taking place over the single night of September 30th, 1998, we have a surprisingly ambitious narrative with expectedly thin characters. Orphaned sister Claire (Kaya Scodelario) and brother Chris (Robbie Amell), who witnessed strange goings-on as children, reunite when she returns to Raccoon City to warn her cop brother. A conspiracy theorist has led Claire to believe the town’s water supply is being poisoned by the nefarious Umbrella Corporation in an experiment gone wrong. Not believing her, they take their separate ways—which eventually leads to Claire having to fight her way through the city’s zombie outbreak next to inexperienced cop Leon (Avan Jogia), a character from the second game, while Chris is outflanked by ghoulies alongside his commando unit at a mansion crime site from the first. During all this, title cards count down to 6 a.m., when Raccoon City is expected to go under.

Maybe it’s not fair to compare it to Anderson’s films, but where the Resident Evil IP seemed like a grand sandbox for his formalist interests and star / wife Milla Jovovich, Roberts’ project feels a little locked-down, each narrative strand a bit undercooked in its own right—Claire rescuing someone out of frame with a shotgun blast feels like it happens one too many times. And despite a mildly effective muzzle-flash sequence, the monotonous gunfire of the mansion portion begins resembling something more like Bruno Mattei’s notorious Italian Aliens ripoff Shocking Dark than the clear influence of John Carpenter.

Roberts evokes effective atmosphere at points. The slowly poisoned citizens of Raccoon City are a disturbing sight for a video game movie and far more compelling than the slow-moving monsters that comprise most of the cannon fodder—not for nothing it eerily plays like one of the few Hollywood movies to actually address the pandemic in some shape or form, if not just in lingering doom of a virus then the general mistrust in every institution it conjured up. A title crawl near the start, explaining Raccoon City as basically an analogue for the number of small towns devastated by NAFTA in the Clinton era, seems deliberately political. Yet Roberts undercuts his more serious intentions at times with indulgent music cues, if still drunk off the sublime “Total Eclipse of the Heart” needle drop in Strangers: Prey at Night; it’s charming when Richard & Linda Thompson’s “I Want to See the Bright Lights Tonight” is used for a character introduction, but annoying by the time the period-appropriate “Crush” by Jennifer Paige undercuts what could’ve been an effective scare.

By the time the climax with a big CGI beastie arrives and basically ends before it begins, the slightly unsatisfying feelings of Raccoon City become cemented. There’s predictably the promise of a sequel adapting further games, but I can’t see fans wanting to spend further time with this world and these characters, no matter how faithful.

Resident Evil: Welcome to Raccoon City is now in theaters.