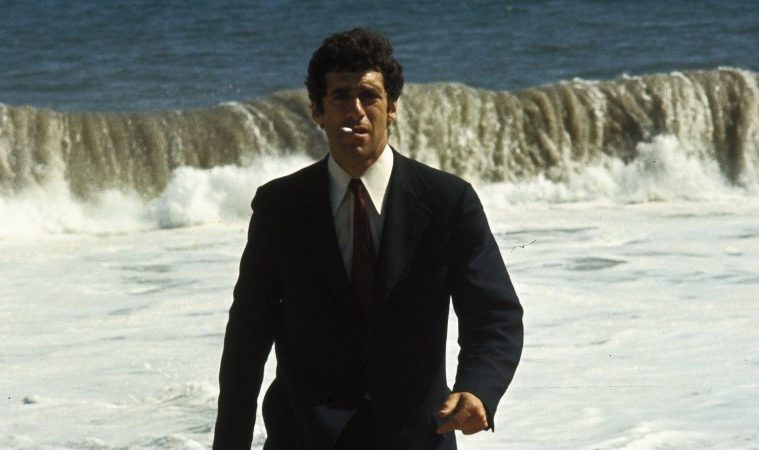 Somehow, it is now late summer 2018. While the release of films like Solo: A Star Wars Story and Avengers: Infinity War seems long ago, they are represented in this latest rundown of books connected to the world cinema. But there is plenty else, including a classic from Paul Schrader, a juicy look at the Sumner Redstone empire, and a must-buy for fans of Clint Eastwood. Note that this summer also saw the release of David Lynch’s Room to Dream, a memoir co-written with journalist/critic Kristine McKenna. Nick Newman covered the insightful and surprisingly comprehensive book in June, and explains why Dream’s “enlightened restlessness” is so appropriate.

With First Reformed still making critical waves and Taylor Swift concert pics going viral, we are in the midst of a Paul Schrader renaissance. (A Schrenaissance!) It is an ideal time, then, for a rerelease of his essential 1972 study of Transcendental Style in Film. Schrader specifically looks at three filmmakers: Carl Theodor Dreyer (The Passion of Joan of Arc, Vampyr), Yasujiro Ozu (Tokyo Story, An Autumn Afternoon), and Robert Bresson (Diary of a Country Priest, A Man Escaped). His analysis is startlingly profound (“Zen art and culture is an accurate metaphor for Ozu’s films”), and just as important is his new introduction. In “Rethinking Transcendental Style,” Schrader looks closely at the “slow cinema” style that followed the book’s release, from Tarkovsky to Van Sant. This is a joy to read, and all the more startling when discovering that Schrader was 24 years old when he wrote the original text.

Now that the dust has settled, perhaps Solo: A Star Wars Story can be seen for what it was: an entertaining space Western with lower stakes than usual for this franchise. Even those who were disappointed can find elements to enjoy in some of the books inspired by the film. First up is The Art of Solo: A Star Wars Story (Abrams), and anyone who has read Phil Szostak’s books on The Force Awakens, Rogue One, and The Last Jedi knows what to expect: a stunning mix of illustrations and text. The reader gets a real sense of how the film’s look and feel came to be, and how certain characters (like Dryden Voss) evolved visually. What’s missing? Any insight into the director switch. In fact, there are zero mentions of Phil Lord and Chris Miller outside of the thank yous, and only one mention of Ron Howard. But who would imagine otherwise? This is not a book for backstage drama. It is, like the best art-of-the-film texts, a breakdown of the how the look of the motion picture came to be. And Solo: A Star Wars Story — The Official Guide (DK) is yet another winner from Pablo Hidalgo. As always, it’s the little details — the mining tools of Kessel, Lando’s “bespoke cape” — that delight.

David Frangioni’s Clint Eastwood: Icon is a visual wonder. The approach is simple: film art is used to trace the career of one our most vital, uniquely personal filmmakers. Newly revised and expanded (it ends with posters for Sully and The 15:17 to Paris), the nearly 250-page book is oozing with visual pleasures. One can see how the Eastwood persona was cultivated artistically, resulting in properly iconic status. Some are silly (the Kelly’s Heroes sandwich poster), some bold (the startling Magnum Force half-sheet). All are worth studying closely. It’s all here, even the Eastwood-directed 1973 romance Breezy, starring William Holden and Kay Lenz.

It’s OK With Me: Hollywood, the 1970s, and the Return of the Private Eye by Jason Bailey

My favorite summer 2018 read was Jason Bailey’s gloriously insightful analysis of the private eye classics of the 1970s — films like The Long Goodbye, Shaft, Night Moves, and Chinatown. The author of some of the finest books on cinema in recent years (most notably, The Ultimate Richard Pryor: American Id), Bailey traces how these films paid tribute to genre tropes, but also subverted them with great success; the “tension between the old and new” in Chinatown’s setting (the 1940s) and era in filmmaking (the 1970s) is part of what makes the film so perversely powerful. Yes, Bailey has real insight into films that have been analyzed endlessly — no easy task — and also succeeds in highlighting lesser-known entries like Hickey & Biggs.

DK published Avengers: The Ultimate Guide back in 2012, but this year’s new edition goes even deeper — new issues analyzed, additional characters highlighted. It is important to note that we are talking comics, only; the films are not discussed here. As Marvel-ites know, though, the direction of franchise was laid out years before. For non-comics readers (like myself), discovering the origins of “Infinity” and “Civil War” is captivating. And since it’s a DK release, the pages inside this hardcover text could not look prettier.

The Serenity Handbook and Firefly: A Traveler’s Companion to the ’Verse by Marc Sumerak (Insight Editions)

Fans of Joss Whedon’s TV series Firefly (R.I.P.) and its film spinoff, Serenity, are known to be hardcore. So there is sure to be an audience for two companion texts from author Marc Sumerak. Firefly: A Traveler’s Companion to the ’Verse is a smartly designed travel book, in a sense, offering a deep dive into the geography of this specific segment of the Whedon-verse. The “history and culture” sections are impressively detailed, but “what to wear” is the cleverest. (On the planet Pelorum: “Though you may not choose to wear much else, at least put on a healthy dose of sunscreen.”) And The Serenity Handbook is even better, featuring ship schematics, character profiles, and notes from members of the crew.

The King of Content: Sumner Redstone’s Battle for Viacom, CBS, and Everlasting Control of His Media Empire by Keach Hagey (Harper Business)

The tale of Sumner Redstone, Viacom, his children, and his girlfriends was absurdly juicy even before the recent Les Moonves revelations. See Keach Hagey’s exhaustively researched page-turner, The King of Content, for confirmation. There are stunning details revealed here, many of them involving the aging kingpin’s sex life and those of his girlfriends. And while it’s hard not to feel a bit saddened, it’s even harder not to be entertained. Redstone has lived a hugely successful, very full life. However, the battle over the future of his empire is shockingly brutal. And it’s not finished yet; Hagey may need to write volume two in a few years.

There are few filmmakers who rival Paul Verhoeven when it comes to killer quotes. It’s impossible for an interview with the Robocop, Basic Instinct, and Showgirls director to be dull, a fact confirmed by this collection, the latest in the University Press of Mississippi’s Conversations with Filmmakers Series. Many of the best lines come from talk about Showgirls (“Even though there are twenty one pretty much naked bodies on the stage it’s not like you go, ‘Oh, breasts, breasts, breasts.’”) But all of his work is represented, including his early work in Europe. Elle is too recent to be featured much here, but no matter. The interviews (and storyboards) present are plenty satisfying.

An Illustrated History of Filmmaking by Adam Allsuch Boardman (Nobrow)

Want to introduce someone in your life to film history in a graphical, inspired manner? Then Adam Allsuch Boardman’s Illustrated History of Filmmaking is a must. However, it is also a must for anyone with a deep appreciation for cinema. The author-illustrator shows the earliest days of filmmaking (Muybridge, Lumière, Méliès) in loving detail, but also tackles important movements in cinema from decades past to today. There’s even a page dedicated to Twin Peaks: Fire Walk With Me. It’s hard to do justice to this eye-popping book in just a few sentences — this is one you need to see for yourself. It’s another fine release from Nobrow.

Just a Shot Away: Peace, Love, and Tragedy With the Rolling Stones at Altamont by Saul Austerlitz (Thomas Dunne Books)

If you’ve seen the Maysles brothers’ Gimme Shelter, you already know what transpired at the Rolling Stones 1969 concert in Altamont. But author Saul Austerlitz makes that disastrous day seem vivid in Just a Shot Away: Peace, Love, and Tragedy With the Rolling Stones at Altamont. This is a detailed analysis of what happened, how it happened, and, most importantly, who was affected. The pages detailing the murder of concertgoer Meredith Hunter are breathtaking, and while no one comes off well, Austerlitz shows that the day was destined to end in tragedy. He has written an important companion to Gimme Shelter.

There is probably no one better to discuss the real Harold Ramis than his daughter, Violet Ramis Stiel. Ghostbuster’s Daughter is a tremendously moving read, and also a very funny one. There are some newsworthy revelations — she tells the heretofore unknown story of her father’s daughter with Clueless director Amy Heckerling, and also details his falling out with Bill Murray. But the most memorable pages are those in which she tells of her complex but always loving relationship with the legendary actor-director. Ramis’s last few years were difficult on him and his family, but his Buddhist philosophy and inimitable personality never went away.

Timothy Zahn’s Thrawn Trilogy from the 1990s rank among the most beloved entries in the Star Wars Expanded Universe. Zahn revisited the chilling, blue-skinned Grand Admiral Thrawn in a number of other books, including 2017’s Thrawn. Zahn’s creation is back in Thrawn Alliances, a compelling new novel that brings the character together with one Darth Vader. It’s another strong book from Zahn, and another interesting encounter with Thrawn. He became one of the most fascinating characters on Star Wars: Rebels, but no one writes Thrawn quite like Timothy Zahn.

From Page to Screen

Several noteworthy reissues are worth checking out, all tie-ins to recent releases. Neil Gaiman’s stellar short story collection Fragile Things (William Morrow) is one, and it features the story John Cameron Mitchell adapted for How to Talk to Girls at Parties. While the film came and went quickly, Gaiman’s 16-page, 1970s-set story of love between a young punk and an alien is fast, funny, and wholly original. Gus Van Sant’s Don’t Worry, He Won’t Get Far on Foot is in cinemas now, and it’s based on the delightful 1989 memoir written by John Callahan (William Morrow). The book features some of the cartoonist’s greatest work. Lastly is Henri Charrière’s memoir Papillon, the true story of the author’s great escape from Devil’s Island. It is an enduring work, one that inspired the Steve McQueen-Dustin Hoffman film of 1973, and a new version with Charlie Hunnam and Rami Malek.

“Jacques Rivette’s La Belle Noiseuse (1991) is the best film I have ever seen about the physical creation of art, and about the painful bond between an artist and his muse.” So wrote the late Roger Ebert in 1992, and his words lingered as I attempted to track down a VHS or DVD copy of the film in the years since. I had no luck. Finally, however, Cohen Media Group has brought La Belle Noiseuse to Blu-ray, and it was worth the wait. The nearly four-hour film starring Michel Piccoli, Jane Birkin, and Emmanuelle Béart is as riveting as Ebert said it was, and the 4K transfer ensures it has never looked better. There are also interviews with Rivette and co-writers Pascal Bonitzer and Christine Laurent, as well as a commentary track from film historian Richard Suchenski.

Also receiving the lavish special edition it deserves is Steven Soderbergh’s still-spectacular debut feature, sex, lies, and videotape. The Criterion Collection’s long-awaited release features the director’s 1998 commentary with filmmaker Neil LaBute, text from Soderbergh’s 1990 book on the making of the film, a new documentary, and more. Above all else, though, is the film itself: a prescient, bold look at the complex relationships of four individuals (memorably played by James Spader, Andie MacDowell, Laura San Giacomo, and Peter Gallagher). That description does little justice to this complex masterpiece, one that forever changed independent film.

What are you reading?