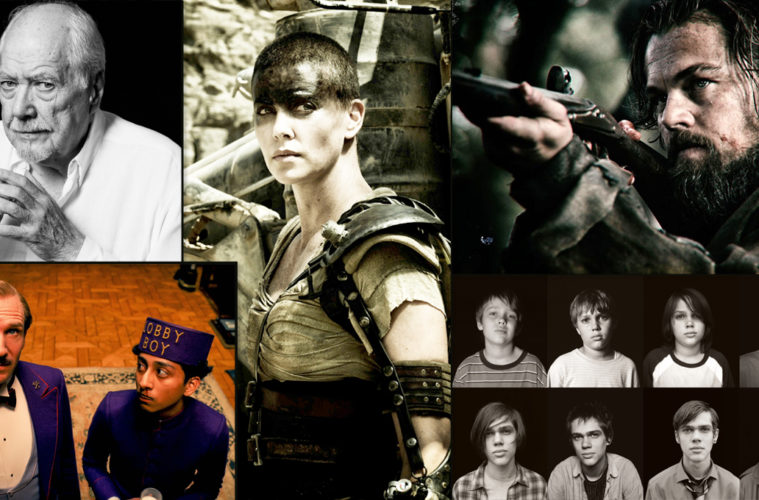 If your idea of beach reading is Nicholas Sparks or Danielle Steel, click away. (And reconsider your life choices.) However, if you plan to work on your tan while paging through weighty hardcover tomes about Robert Altman, Boyhood, and Grand Budapest Hotel, read on. We start—as one should—with George Miller’s fast-and-Furiosa masterpiece, Mad Max: Fury Road.

Many thoughts run through one’s head while watching Fury Road—Could George Miller’s film make the rest of this summer’s blockbusters look any weaker in the knees? Can fans stop worrying about the chronology? Why wasn’t late Howard Stern Show fan favorite Eric the Actor cast as the little person who looks through the telescope?—but the most pressing is likely, “How did they do that?!” The Art of Mad Max: Fury Road has some answers. From storyboards and sketches to insightful production photos, the book is an extravaganza of ugly-beautiful details. Some of it is haunting, including a still of a young “War Boy” in the making gazing in the distance and an extreme close-up of a disturbingly skeevy Nicholas Hoult. Some is surprising, including the concept that the “Wives’ quarters” are “filled with the world’s last remaining books.” All of it, without question, makes a rich film seem even richer. Abbie Bernstein’s book is a brisk, fascinating read, and a must-have for the Rockatansky completist.

Matt Zoller Seitz’s dazzling, marvelously designed 2013 book The Wes Anderson Collection was one of the finest film-related texts of recent years, but had one failing: Timing meant that it could not include 2014’s Grand Budapest Hotel. That problem is now solved. The Wes Anderson Collection: The Grand Budapest Hotel is a glorious companion, featuring more than 250 pages of interviews (with Anderson, Ralph Fiennes, Robert Yeoman, and others), essays (from the likes of David Bordwell and Ali Arikan), and photos, artwork, and much more. There are even excerpts from the works of Stefan Zweig. Above all else, there are illuminating thoughts like this one, from Zoller Seitz’s preface: “[W]ith each successive viewing of The Grand Budapest Hotel, a funny, really not­-so-funny thing happens: We realize that all these acts of self-reinvention and self-determination will nonetheless be trampled by the greedy and powerful, then ground up in the tank treads of history.”

Comedian-actor-Twitter superstar Patton Oswalt is a cinephile extraordinaire, and Silver Screen Fiend—subtitled Learning About Life From an Addiction to Film—is one of the finest chronicles of movie love and its life-altering impact in some time. As the memoir progresses, Oswalt’s stand-up career slowly flourishes, but it’s the film talk that makes Fiend so memorable. His Day the Clown Cried anecdote alone makes this an essential read, as done his heartbreak after seeing The Phantom Menace. Oswalt’s thoughts on a second viewing of the Star Wars prequel are wonderfully well-reasoned: “I guess I’m hoping for some sort of redemptive miracle, or that maybe I was wrong in my initial assessment. Also, there are parts of it I like. It’s sheer uncut nostalgia. … But it still sucks.”

Star Wars Epic Yarns: A New Hope, The Empire Strikes Back, and Return of the Jedi by Jack and Holman Wang (Chronicle Books)

The Star Wars Epic Yarns trio is summarized nicely on the back of each book: “Twelve handcrafted felt scenes + twelve words = one epic microsaga!” That about sums it up. While the twelve words are a bit banal for readers over, say, 6 (“trouble,” “hurt,” “boom!”), the scenes are stunningly detailed. Yoda, in particular, is adorable, and the key moments from A New Hope, The Empire Strikes Back, and Return of the Jedi are all here. My Star Wars-obsessed 4-year-old finds the three books delightful, and so do I.

The career of Robert Altman demanded a colorful, photo-heavy coffee-table book like Altman. This visual biography is co-authored by the late director’s widow, Kathryn Reed Altman, and film critic Giulia D’Agnolo Vallan. They have created a wildly entertaining summary of the man’s career and life, including scores of interviews (collaborators represented include Lily Tomlin, Jules Feiffer, and Julian Fellowes) and unique insight into the peaks and valleys of his life. The lows of the 1980s are especially interesting, but readers will be most moved by the photos and memories of his final days. The last photo of husband and wife, taken at home shortly before his passing in 2006, is gloriously loving. “I think it’s a very special picture,” Reed Altman writes. That’s an undeniable sentiment.

Last year around this time, most film fans were anxiously awaiting the chance to see Richard Linklater’s Sundance smash, Boyhood. In a matter of weeks after opening, the 12-year-in-the-making backstory had become part of pop culture lore. While the film failed to pick up the Oscars many thought it should (besides Patricia Arquette’s much-deserved Best Supporting Actress statue), the passage of time has not diminished the boldness of Linklater’s approach. The gorgeous photographs by Matt Lankes in Boyhood: Twelve Years on Film make it even easier to appreciate the uniqueness of production. Here are the faces of Boyhood—all of them, from Mason and his mom and dad to the guy behind the counter at the liquor store. The behind-the-scenes pics, especially, demonstrate what an experience the film must have been to make, and remind us how thrillingly alive it felt to viewers.

Self-Styled Siren blogger Farran Smith Nehme’s debut novel is an utter delight. Movie-loving lead character Ceinwen Reilly is a native of Yazoo City, Mississippi now living in 1980s New York. She finds herself on a quest to track down a long-lost silent film, and I find myself hoping that Emma Stone is cast in a big-screen adaptation of Reels.

It is hard not to be fascinated by F. Scott Fitzgerald’s years in Hollywood. In West if Sunset, the great Stewart O’Nan (Snow Angels) imagines the final years of the author’s life. The novel is wonderfully detailed and hugely moving. It’s a fine companion to Fitzgerald’s own The Love of Last Tycoon.

Jo Nesbo is no stranger to Hollywood—see Headhunters, and, hopefully, eventual adaptations of his Harry Hole novel The Snowman and the stand-alone novel The Son. (Channing Tatum is attached to the latter.) Blood on Snow, the compulsively readable story of a crime scene “fixer,” has Leonardo DiCaprio on board as producer and possibly star. Note to Leo: Blood is bloody good. Take the lead role, please.

The Revenant by Michael Punke (Picador)

Speaking of DiCaprio, the actor’s next film is The Revenant, Birdman Oscar-winner Alejandro González Iñárritu’s adaptation of Michael Punke‘s 2003 novel. If the recently re-released book is any indication, DiCaprio has perhaps one of his most formidable performances yet in store. This tale of a 19th century a fur trapper on a quest for revenge is a captivating read. Buy it now, and ponder what Iñárritu and his stellar cast (which also includes Tom Hardy and Domhnall Gleeson) will bring to the table.