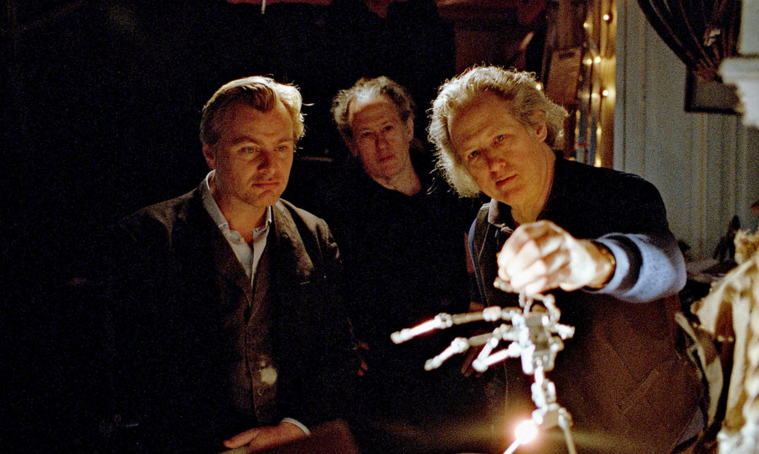 If you are a fan of traditional stop-motion animation, there’s a good chance you’ve seen some of the delightfully bizarre work of the Quay brothers. Stephen and Timothy, identical twins from Philadelphia, made their mark after directing several breathtaking animated shorts in Europe, creating disturbing worlds inhabited by decaying, hand-made puppets that often reference esoteric works of literature, music, and art. Unmistakable in their idiosyncratic visions, their unique style became a staple in art house cinema and influenced a generation of filmmakers and animators. While much of their work was difficult to find outside the festival circuit or the occasional museum retrospective, that’s changed with a new, pristine Blu-ray release of their collected shorts distributed by Zeitgeist films.

Featuring their breakthrough film Street of Crocodiles, a collection of their MTV-commissioned shorts Stille Nacht, and their most recent works, Through The Weeping Glass and Unmistaken Hands, as well as many more, this is the ultimate treasure trove of their work. In addition, there are several insightful commentary tracks from the brothers, which illuminate fascinating details about the intent behind their imagery. Finally, there is the presence of Christopher Nolan, who has thrown his cinematic weight to bring this release to a larger audience. There is a heartfelt essay about how the director first experienced their work and was influenced by them from an early age. In addition, there is a stunning short film, Quay, shot by Nolan himself using a shoulder-mounted 35mm camera, that documents the brothers in their rarely seen workshop and reveals their playful candor and love for their craft.

I was fortunate enough to ask the brothers a handful of questions regarding the release of their anthology, including how Christopher Nolan became involved, their thoughts on 3D animation, and how their thematic threads connect this work. To note, it was conducted over e-mail, which accounts for the lack of attribution between Stephen and Timothy, and one can read it below.

The Film Stage: The opening short in the anthology is The Cabinet Of Jan Švankmajer. What would you say was the most important lesson Jan Švankmajer gave you in developing your creative process?

The Quay Brothers: To not be afraid and to be fearless in the métier of animation. And in this film we dramatized our own position vis à vis him: he was the ‘Master’ and we were the ‘pupil.’ Heretofore we had shamefully never heard of him and it was through a Czech friend at the Royal College of Art who mentioned him and this was well before VHS and the advent of the internet. And through Keith Griffiths, our long-time producer, we were able to get financing through Channel Four to centre the film around Czech surrealism which still flourished even under communism, unlike French surrealism which was virtually moribund. Prior to this our formation in puppetry was linked to the works of Starewicz, Trnka, Borowczyk, as well as the rod puppets of Teschner which were available as film prints. And lastly, The Cabinet of Jan Švankmajer was a homage to Jan’s composer Zdeněk Liška, who unfortunately died the very same year this documentary was made.

Where do you draw inspiration from to create these magnificently surreal worlds, and what does it take to actually build them? How much time do you spend crafting each puppet?

The making of the puppets goes hand in hand with the building of the décors, each is the result of the other or at least provides a path for the other to follow. Some puppets are found in street markets, certain others in antique shops, however the majority are sculpted by hand by us. And of course certain objects are found in these same street markets but a puppet can take a week to make or maybe a month. On top of it, a ball & socket armature could take weeks to make.

Of all the shorts presented, is there any that you are particularly happy people will get a chance to see? Perhaps a personal favorite?

We’ve always been most attached to Tales from Vienna Woods [Stille Nacht III]. For us it captures the essence of how we prefer to create a film: it started from a footnote that was clearly unsubstantiated, more theoretical, and yet it permitted us to establish a fiction that was both genuinely dreamlike. And all the time it was a kind of documentary all remembered as a flashback.

Much of your work is very abstract, like voyaging through a dream, but in the commentaries there is often a specific narrative that you ascribe to each scene. Do you ever fear that people will not fully understand your vision as filmmakers or is your imagery sometimes intentionally opaque?

We probably aspire towards a certain ‘drift’ but this is the language and domain of pure images which is NOT necessarily ‘narrative, according to what is normally expected of ‘narrative,’ and therefore mustn’t suffer the same comparison. Images, like music, have their own laws and as we’ve said before, our narratives obey musical laws rather than dramaturgical laws. But for us the realm of say our particular cinema fuses image, music, sound and there is no hierarchy between them.

As for our imagery being ‘opaque’, we don’t ever really accuse instrumental music of being opaque. A symphony by Charles Ives, for instance, will never suffer being accused of being opaque, difficult perhaps but true! But then music demands an entirely different language of interpretation and assessment. It’s like we’ve always said about dreams: everyone always says: I had this fantastic dream last night but it would be absurd to say I had this dream last night with the most boring narrative. We’ve always approached our tenuous ‘narratives’ by discovering a side door [and thereby avoiding the front door]. Yes, it does make our narratives invalid for many.

An uncompleted image does permit the spectator to finish it. It’s not a guarantee and it’s not meant to be a presumption. Certain of Kafka’s diary entries simply stop…there’s no conclusion. You’re left with the remains of a torso and that’s it. We’ve always been struck by that…or paralyzed by that huge suspension of doubt. Despite the entry being a fragment it strangely feels whole to us.

Can you discuss how you met Christopher Nolan and how that led to him making the intimate short documentary about your workshop and technique? Do you hope to collaborate with him in a future project?

We think that Christopher must have first discussed things through Zeitgeist [the distributor] and then, yes, we were warned and one day he telephoned. We invited him to visit us in the studio the next time he was in London. But we were genuinely surprised when he proposed a documentary as well as supporting the Blu-ray. Our only stipulation was that he make it in one day and so he brought in this monster of a 35mm camera that he himself operated and finished it by late afternoon. It was all pretty much improvised. And as some future collaboration: very unlikely, but who knows?

Do you find the medium of shorts to be more personally gratifying than feature films or projects with larger budgets?

Of course short films are paradise because there’s only the need for the two of us and there’s absolutely no one to intervene …whilst on a feature, you’re gently traumatized by a crew of 44 people that you’re genuinely beholden to and as well a ferocious schedule. So where we don’t really have to verbalize between ourselves making a short film, you do have to verbalize and delegate during the making of a feature film. At the moment, we’ve just finished making the décors for a National Theatre production of a Wallace Shawn play and fell back into the arms of theatre and a camaraderie between not only the director and the lighting designer but the cast and crew as well. It was very touching to be able to sink into a world like that where any impulse was invited. But making Institute Benjamenta (live action feature) was a halcyon experience.

How do you feel about the state of animation as it is today? Do you ever think you would try to utilize the new digital tools (3D animation, modeling, etc) that technology provides?

Animation is everywhere. It’s unstoppable. But it would be utterly pointless for us to embark on a program of new digital tools for the sake of it and it would probably be laughable. We’re so far off the edge of animation as it is known today to be even remotely astonished, challenged, or even worried. We cannot possibly imagine being wiped off the earth by CGI and a legion of supporters simply because, for one, we’re not an issue for them. Alas, we investigated a 3-D printer, and the cost was just too exorbitant for our kind of budget. So, in the end, we hand-made the objects. Obviously a lost opportunity, but, for us, there is the crucial ritual of needing to touch an object or a puppet in order to release its inhabited-ness. That is our own personal challenge.

However only yesterday, we saw a Mizoguchi film that employed a Noh mask, which means that the lips of the mask do not [or never did move] despite there being a highly ritualized sung / recited text. It was so remarkable and simple and powerful and it always makes us think of the supremacy of dance, which normally speaking, never has to resort to dialogue to make known what is proposed by the music and an intense stylization of movement that is otherworldly, and therefore sacrosanct. Not, of course, for everybody’s taste — and, yes, we live in a modern world — but we also secretly honor those artists and artisans that have preceded us who have been incalculable to our own formation as film-makers.

If there was one thematic thread that connects your various short films, what do you think it would be?

We probably imagine them as oblique essays or forays into realms from which no answer will ever be an official explanation. The films are too closely aligned to music which is a non-narrative utterly incapable of being dissected.  Nevertheless literary themes do abound whether from Schulz, Walser, Kafka, Hernández, or Lem, but they still obey a certain musicality which entirely informs their individual but still obstinate structures.The text of Lem that we used in Maska is a force that is devastating and concise whilst in the Felisberto Hernández film, the text becomes a foil for allowing the narrative to exist with the authority of absolute subjectivity. These are not normally the topics of animation or for that matter where animation tends to stray given that Walser has shaped our world in both animation and live action. So the thread is for the most part a homage to literary sources that have informed us hugely apart from our own personal and pathological drifts.