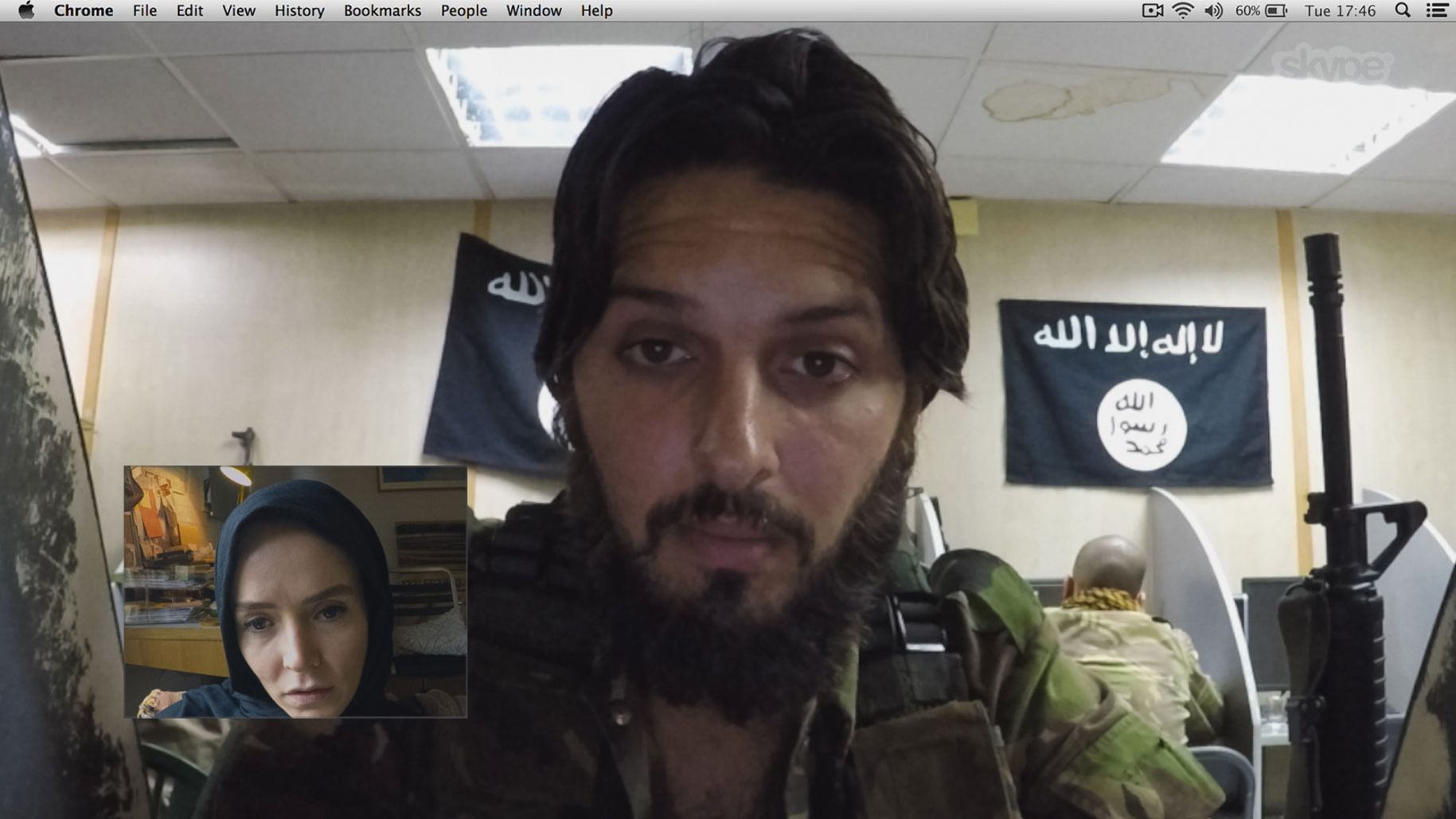 In 2015, French journalist Anna Érelle published In the Skin of a Jihadist: Inside Islamic State’s Recruitment Networks. In order to investigate ISIS recruitment tactics, Érelle posed online as a teenager who had recently converted to Islam. She was courted by a man named Bilel, who claimed to be a high-up member of ISIS living in Syria. Unexpectedly, in 2018, her story was turned into a feature film that takes place entirely on a computer screen, in the vein of Unfriended and Searching.

Three years after its Berlinale premiere, Profile is finally hitting cinemas and while it’s unclear why it took this gripping film took so long to see the light of day, it certainly feels particularly relevant now that we’re all living our lives on our desktops. As Profile director Timur Bekmambetov told Deadline a few years ago, “There is no way to tell a story about today’s world without showing a computer screen. It is where we live today.”

Bekmambetov’s odd career trajectory has taken him from Russian blockbuster Night Watch to Hollywood studio movies Wanted and Ben-Hur, to his current obsession with what he calls “ScreenLife” films. Convinced desktop-based storytelling is the future, Bekmambetov has committed much of his energy to producing them, including the aforementioned Unfriended and Searching, as well as the recent miss R#J. Profile is the only ScreenLife film he’s directed, and it might just be the best in the genre so far.

In it, Valene Kane plays Amy, a stand-in for Anna Érelle, although the action is transposed from France to London. Amy is a struggling thirtysomething freelance journalist who successfully pitches an investigation into ISIS recruitment techniques. She launches into the article more because she knows a sensationalist story will get her the big bucks than because of any sense of moral obligation. (This freelancer chuckled knowingly when I spotted emails in Amy’s inbox about overdue rent, just before she throws herself into the most dangerous assignment of her career.)

What could be an overdramatized story becomes refreshingly mundane when transposed to the setting of a desktop screen. It’s bizarre to see Amy, logged into Facebook as her teenage alias “Melody,” receive cat emojis and gifs from ISIS recruiter Bilel (Shazad Latif). He even sends her to an Instagram page called “Islamic State of Cat” which is full of cute cat pics. Beyond mere comedic beats, these details help us understand how young people are lulled into a false sense of security by recruiters, who know how to communicate with them on their level.

In Profile, a screen is a dangerous and revealing place. We all experience the anxiety of making sure our desktops are clean before screen sharing, or curating our Zoom backgrounds so as not to inadvertently reveal messy details of our lives. In Profile, these anxieties are heightened by life and death stakes. Amy begins regular Skype sessions with Bilel, who romances her, promising to bring her to Syria and make her his bride. Amy has to play the part of the innocent teen Melody, which means applying makeup to make herself look younger, covering up her tattoos, and ensuring nothing in her apartment looks suspicious. It also means that when Bilel asks her to share her screen, she has to think on her feet to hide her current desktop, which would give her away at a glance.

Bekmambetov uses ScreenLife in a way I’ve rarely seen before, experimenting with this new cinematic language in incredibly exciting ways. For example, Amy screen records every conversation she has with Bilel, so that she can edit that video into her eventual report. Bekmambetov structures the film so that we are watching these screen recordings rather than watching the film unfold on Amy’s desktop in real time, meaning he can seamlessly jump forward in time, and even tell the story non-chronologically.

He also prioritizes realism over a traditional “cinematic” look. Because of how our lives are composed now, there have been many films shot during the past year that depict video chats in such blatantly unrealistic ways. Either the connection is too clear, or the buffering is clearly reconstructed in post. Profile is full of video chats shot with grainy webcams or phone cameras, captured in low light, and when the connection breaks up, it’s authentic. It’s small details like this that make Profile absorbing; it’s so authentic that one is able to lose themselves in Amy’s desktop as if she were a real person.

What’s impressive about Profile, beyond its use of ScreenLife, is how it generates empathy for the young women who are duped by ISIS recruiters. There’s a tendency to look down on these girls and assume that we could never be fooled as they were. As an adult woman, Amy approaches her assignment from that perspective, too. However, the more she speaks to Bilel, the more invested she becomes in him. As a viewer, it can be frustrating to see her falling under his spell. Yet after a revelation near the end of the film, I realized that I, too, had been fooled by Bilel on some level. A lot of that is down to the brilliant Shazad Latif, who plays Bilel with such swagger and complexity. There’s always something sinister about him, but he papers over it with immense charisma.

Profile manages to be a story about impactful reporting without falling into any of the treacly, self-aggrandizing righteous journalism tropes we’ve seen time and time again. Amy enters the assignment with a level of uninformed prejudice that the film isn’t afraid to acknowledge. When she finds out that her tech guy, who the paper assigned her to help with screen recordings, has a Syrian mother, she immediately complains to her boss and insists he be replaced. We sense that she’s not totally prepared for this assignment, evidenced by her knee-jerk assumption that all Syrians aren’t to be trusted. Ultimately, Amy acts heroically, but she isn’t presented as a predestined hero; her initial intentions are self-serving, but faced with the terrifying reality of ISIS recruitment, she instinctively takes action.

Bekmambetov has crafted one of the most immersive and engrossing thrillers in some time, and he does so by bringing the action almost too close to home. While the gloss of studio thrillers allow enough distance that we can sit back and be entertained by what’s on screen, Profile’s desktop setting makes Amy’s situation all the more immediate, because it feels so authentic. The film is proof that ScreenLife isn’t just a gimmick, but a cinematic tool we ought to be taking seriously. Filmmakers are only just starting to unearth the storytelling opportunities it opens up.

Profile opens in theaters on Friday, May 14.