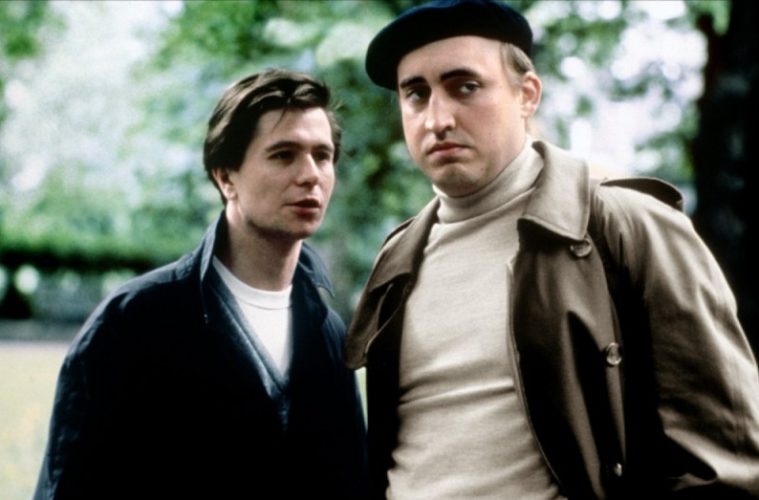 “I was saying to my friend the other day that just proves being gay doesn’t change anything. Everybody has all the faults and failings of everybody else. A gay friend of mine said, ‘Just because I’m gay doesn’t mean I’m fabulous all the time.'”  – Alfred Molina, actor in Prick Up Your Ears

Many of today’s LGBT films are hagiographies about great people in the international movement toward sexual equality. In film, adulation usually results in flat characters and boring scenes (see: The Imitation Game). In Stephen Frears’ groundbreaking Prick Up Your Ears — which Metrograph screens from September 1-7 for its 30th anniversary — Gary Oldman brings pioneer queer playwright Joe Orton to life, warts and all. Alfred Molina plays Joe’s long-time boyfriend, mentor, and murderer, Kenneth Halliwell.

The story is structured with flashbacks to Joe and Kenneth. Wallace Shawn plays real-life Orton biographer John Lahr, an inquisitive researcher, but not much of a gumshoe. Lahr meets with Joe’s manager Peggy Ramsay, played exquisitely by Vanessa Redgrave, who withholds Orton’s diaries from Lahr until she learns that his motives are pure. Their conversations narrate the flashbacks and provide context throughout.

Early in the film, Joe goes by his birthname (John) and his friendship with Kenneth develops into a relationship that doesn’t progress to far beyond its immaturity. Kenneth is an uptight actor/playwright in waiting. He’s said to have lost his mother as a child and when he’s eighteen he find his father dead, head-first in the gas stove. Kenneth’s callous resolve to have a cup of tea before phoning the police gives a clue to his and Joe’s demise.

The couple spend ten years together living in obscurity and poverty. Each other’s misgivings happen to be the weaknesses that endear one to the other, long after the relationship becomes dysfunctional. It’s also a formative relationship for both. When they move in together, the guys watch the coronation of Elizabeth II on television. Joe metaphorically says watching television is a ‘new experience’ for him. Kenneth draws the curtains and makes love to Joe. They declare it the beginning of a new era as the queen takes her crown and Kenneth gives Joe his first homosexual experience. Alan Bennett’s screenplay, based on John Lahr’s biography, is filled with witty banter and is a delightful character study with a gruesome ending. Its script, which won Bennett screenwriter of the year from the London Critics Circle Film Awards in 1988, is the strongest aspect of an already excellent ensemble of artists.

Prick Up Your Ears isn’t afraid to show that Joe Orton borrowed much of what he wrote from his relationship with Kenneth. The two lived in a cramped flat, even after Joe became a successful playwright. Joe provided for Kenneth out of sentimentality, but Kenneth’s undiagnosed mental illness and anger toward Joe grew. Joe wouldn’t let Kenneth attend award shows or enjoy the luxuries of his success. Like many mentor-student relationships, the student surpassed the mentor, and in Kenneth’s case he couldn’t live with the pressure of his failings as an artist.

The film artfully deals with the tragic end of their lives upfront, so not to sensationalize the bludgeoning when it happens. Despite an abrupt ending and far-too-cheery end credits music for what the audience just witnessed, this is a winning depiction of gay artists under strict “law and order” before the U.K.’s Gay Liberation Front.

Prick Up Your Ears is now playing at Metrograph through September 7.