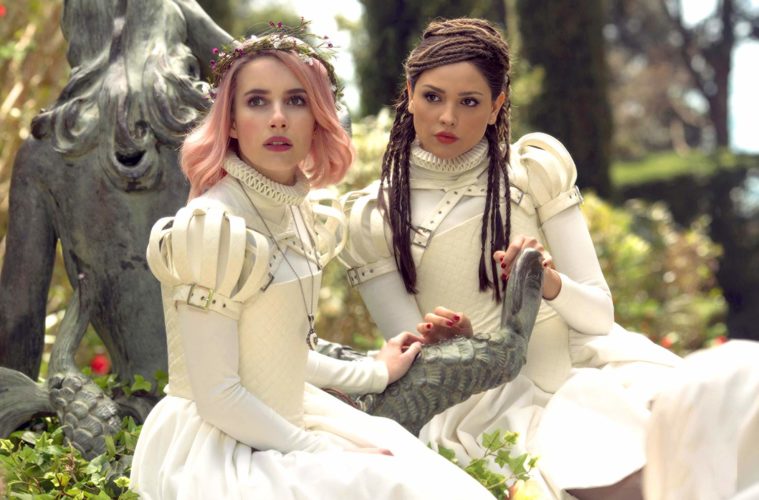 A futuristic take on class warfare, Alice Waddington’s Paradise Hills is a compellingly strange, visually daring, but ultimately narratively empty directorial debut. Led by Emma Roberts, Awkwafina, and Milla Jovovich, the film features a unique mixture of costume and set designs (think Burton’s Alice in Wonderland meets The Prisoner) yet its intriguing set-up quickly runs aground with stilted dialogue and awkward plotting, spending much time on its cotton-candy aesthetic and not enough on sorting out its jumbled themes.

Taking place in a somewhat distant future, we begin with Roberts’ Uma seemingly dressed as an extra from the Capitol scenes in The Hunger Games, in full camp mode at an upper-class party before quickly flashing back to two months earlier, as she wakes to find herself in an island retreat, run by The Duchess (Jovovich, truly enjoying herself). Sent there by her family who wants her to abandon her poor lover and marry a more appropriately wealthy suitor, Uma is resistant to the Duchess’s methods. Forced to room with Chloe (Dumplin’s Danielle Macdonald) and Yu (Awkwafina), the retreat reveals itself to be a curated experience, as each is sent there for a specific type of reprogramming. Her lover Markus (Jeremy Irvine), who arrives and takes a job as the new gardener, promises to set her free. And, just like that, an escape plan is hatched.

Also thrown in the mix is Eliza Gonzalez’s Amarna, a famous pop singer who was placed in the retreat because of her unwillingness to conform to her producer’s idea of her image. Initially introduced during Uma’s first escape attempt, Amarna moves between alliances, as our lead is unsure if she can trust her, before revealing to know more about the retreat than any of the other girls.

Of course, there’s sinister plotting at play as the nefarious purpose behind the retreat is revealed. That pay-off, which comes in a few late third act twists, is unexpected as Waddington performs a bait and switch on the audience. What initially begins as a commentary about educational reform soon turns into a treatise on privilege and status. Yet the late introduction of a final peak behind the curtain is muddled. Without revealing too much, the futuristic world isn’t fully developed as we are only given hints at what life outside the retreat might look like.

Co-scripted by Timecrimes and Colossal’s Nacho Vigalondo, the movie is overburdened with ideas. While it’s admirable that the filmmakers chose not to lay on exposition, overexplaining the societal classes and structures inherent, it also makes for a confusing narrative with the constant feeling of having missed something as if a pile of deleted scenes were left by the wayside. Key moments of dialogue, especially in the interactions with Uma, Chloe, and Yu, hint at some type of post-apocalyptic society, but it’s anybody’s guess.

Obviously, more time was spent in developing the film’s aesthetic, which is truly beautiful. While owing obvious influence to the work of Tim Burton, and riffing on everything from Alice to Red Riding Hood, among other fairy tales, Waddington dresses her actresses in what is essentially white armor, while the Duchess’s floral print dresses come up in later in the film for a bizarre (and confounding) payoff. Added to this are the ‘sessions’ in which the girls are forced to endure audiovisual overload while strapped to a unicorn from a carousel, which never gets explained but at least looks cool. In all, that might be the best way to describe Paradise Hills: bizarre for the sake of being so. While always visually interesting, the plot fails to live up to the sheer detail of costume and set design. Waddington proves herself to be a stylish director. If only next time she can find a better script.

Paradise Hills is now in select theaters and arrives on VOD on Friday, Nov. 1.