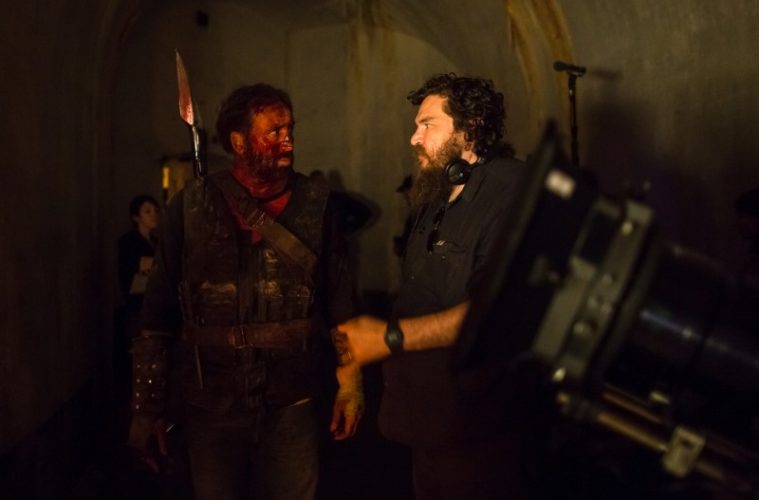 Beyond the Black Rainbow, the first feature from director Panos Cosmatos, quickly established the Italian-Canadian as a name to remember. With his follow-up Mandy, Cosmatos raises the bar. Anchored by a central performance from Nicolas Cage that is equal parts tender and furious, Mandy doubles down on Cosmatos’ firm commitment to tone, while strengthening the emotional foundation amidst the swirl of colors and mayhem. Oozing like a dream that goes south, Mandy is a hallucinogenic vision of vengeance.

Ahead of the film’s opening this week, we sat down with Cosmatos to discuss crafting a tone and steady pace for Mandy to build emotions, recognizing different sides of Nicolas Cage to show on screen, finding commonalities with the late Jóhan Jóhansson during their collaboration, and shattering the delusional self-image of egomaniacal men.

The Film Stage: So, I read that Red Miller (Nicolas Cage) is based partially on a police officer from your childhood, and in the film he has this gruff, kind of salt-of-the-earth aesthetic, but he’s also very tender, especially with Mandy. How did you craft the two sides of Red?

Panos Cosmatos: Well, the cop was an undercover, or like a plainclothes drug cop when we lived in Guadalajara, Mexico in 1981. He lived in the same bungalow complex as us, and he would have a gang of these very shady-looking men hanging around and they’d practice firing their chrome-plated magnum .44 at the outer wall of the complex. One evening, I was playing on the lawn in front of our bungalow and he came burning around the corner on his Harley — well, it was a full-on Chopper, actually — with his girlfriend clinging to him, with her hair blowing in the wind, and above a lightning storm was brewing, and the sky was broiling with Poltergeist clouds. So, thunder and lightning were going off and he saw me, and he drove right towards me and tore up, doing a 360 on the lawn right in front of me, and then he burned off while thunder and lightning were striking and that moment always stuck with me. [Laughs.] So, I sort of used that as a template for Red early on. As far as the flip side of that goes, I just wanted him to be a simple, emotional, caring person. He and Mandy both are damaged people that have sort of found a lot of comfort in each other.

Similarly to Red, Mandy as a film has two sides. The first half is a love story that’s turned to suffering, and then the second half is this psychedelic tale of vengeance. Yet it’s all very cohesive in its tone and its mood throughout the entire piece. How did you decide to pace and structure the film?

That’s the sort of thing that just kind of builds up over time. I think that when I start creating something, I start with a genre, and then I start building layers onto that stripped-down thought of the genre at its very simplest possible form. Then these things kind of present themselves over time. You start building in sequences and characters, and over time you just work this model kit, essentially, until you feel like it is shaped properly. It ended up being shaped like two halves, and one half is gentle and the other half is savage. I think it reflects Red and Mandy perfectly, in a sense.

A lot of people complain that modern horror films have no emotional core to justify their gore. Mandy is really spectacular in how it gives itself an hour to establish motivation and empathy, and really take its time. I think that pacing is really special.

Thanks, man. I think it’s incredibly important that you not only get to know, but live with these characters in a way where we sort of soak in the feeling of being around them. So when that’s destroyed, you feel it in a sensorial and emotional way, not just as a story beat; you really feel like something’s been torn out of your reality.

Like in your first feature, Beyond the Black Rainbow, I feel as though Mandy has a lot to say about power structures, and about false gods and false prophets.

Can you talk about what draws you to those models and what inspires them?

I am kind of fixated on this idea of male gods who present an image of absolute power, or even just power in a small scenario, but are actually just insecure people. I think originally the idea for that, where I started noticing it, was in spurred in part by the villains in Stuart Gordon films, who are always these obsessive, sexually perverse, egomaniacal men. That idea was interesting to me, but then the idea of deconstructing them, and tearing down their image of themselves was even more interesting to me. Like with Barry Nyle (from Black Rainbow) and with Jeremiah having Mandy shatter his delusional self-image. There’s something about shattering the delusional self-image of an egomaniacal man that’s endlessly hilarious and disturbing and interesting to me.

Another way you establish tone and a cohesive feeling for the entire film is through the score. It combines drone elements, metal riffs, and some really gentle, tender melodies. What was it like working with the late and incredibly talented Jóhan Jóansson?

It was wonderful. It was a very fluid, creative relationship. I didn’t know what to expect from him because I kind of perceived him as this very academic person. I mean, I loved his music but my perception of him from afar was of a very cold person. But he was very warm and kind of gruff, and had a lot of the same loves and interest as I did growing up. I realized that at heart, he was kind of an Icelandic metal head.

So, we kind of went from there. I told him that I wanted to make a phantasmagorical rock opera and I think he really got into that idea. We were intent on this idea that we were going to draw on our influences from our youth, but not ape them but instead interpret them from the present.

This film really stands alone. With that being said, were there any films you screened for the cast and crew to prep them for the experience or for the vibe you were going for with Mandy?

I’ve never done that. You hear about people doing that but our schedule and our budget tended to be such that there was literally no time to do anything like that. But, one of the benefits of building a film visually and with reference images over time is that you have a lot of material you can give the cast and crew to absorb on their own. I’m not really big on group gatherings and screenings. [Laughs.] So maybe I’m a little more comfortable with just giving people a bunch of movies and pictures and music to listen to and let them absorb it at their own pace.

Nicolas Cage is known for releasing his rage, and getting these really iconic angry moments, and you have these amazing moments of rage with him. But you also get a real, great tenderness out of him, and a lot of empathy. What was the collaboration like, in terms of your experiences with a police officer that you were drawing on for Red, and then Nicolas Cage coming in with his own ideas?

One of the first things I noticed about him when talking to him was that he was an incredibly likable, warm person. I felt like that was rarely exposed in his films, especially as of late. I was excited by that because I realized there’s this whole side of him you don’t really get to see in a film, where he’s just kind of being more like he is in reality which is a pleasant, chill guy to be around. So you start with that, which is that he’s a normal guy, and then after Mandy’s experience [Red] kind of becomes a stripped-down animal, and from there we wanted him to transmogrify into this sort of Jason Bourne; he’s sort of a demigod. And that was the path we charted together, sitting there talking about the script.

Alright, this is a bonus question. Something I noted about Black Rainbow and Mandy is that both of your films feature blades jammed into mouths, and I’m wondering if that’s an intentional director signature of yours? Can I expect that in your third film as well?

You should keep it up, because it’s really startling every time.