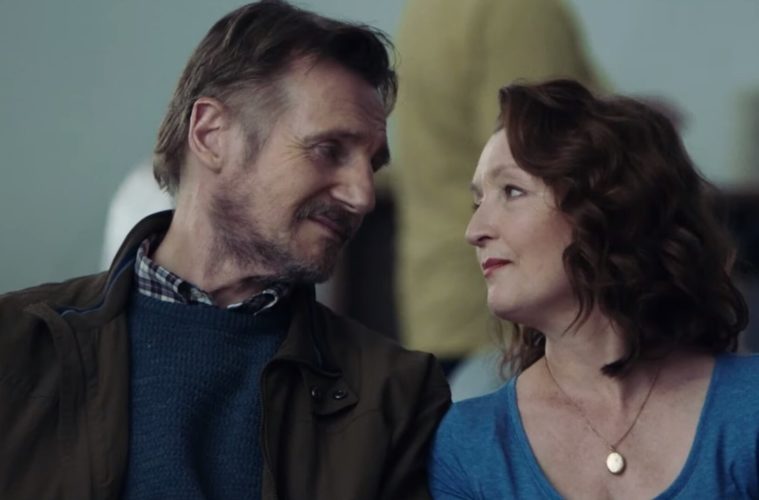 An official selection at TIFF, the first trailer has now been unveiled for Ordinary Love, from the directing team Lisa Barros D’Sa and Glenn Leyburn (Good Vibrations). Mike Leigh favorite and Phantom Thread star Lesley Manville plays Joan, the seemingly contented wife of Liam Neeson’s Tom as they exercise, follow a strict healthy diet, and converse as seemingly ordinary couples do. Their lives are upended by the sudden breast cancer diagnoses of Joan and the eventual fall out of their health-conscious livelihood and marriage tested. The film questions if a couple truly can be together through every struggle each partner faces, which is on full display in the somber first trailer.

Amy Nicholson writes her review for Variety, “ Yet, they’re plenty of company for themselves, two people whose mouths are always in motion, delighted to mock-bicker over buying Brussels sprouts or going out for a beer. Tom and Joan tease each other with genuine affection — otherwise, when chemotherapy claims her hair, Neeson would never get away with the line “I never really liked your hair to begin with…He’s so large beside her, he could put her in his pocket, as Katharine Hepburn swooned to Jimmy Stewart in The Philadelphia Story. And when Manville quietly looks at him — whether in anger or affection — it’s beautiful.”

See the trailer and poster below, along with a TIFF conversation.

Joan and Tom (Academy Award® nominee Lesley Manville and Liam Neeson) have been married for many years. An everyday couple with a remarkable love, there is an ease to their relationship which only comes from spending a lifetime together. When Joan is diagnosed with breast cancer, the course of her treatment shines a light on their enduring devotion, as they must find the humor and grace to survive a year of adversity.

Bleecker Street will release the film in the U.S. but have not set a date yet.