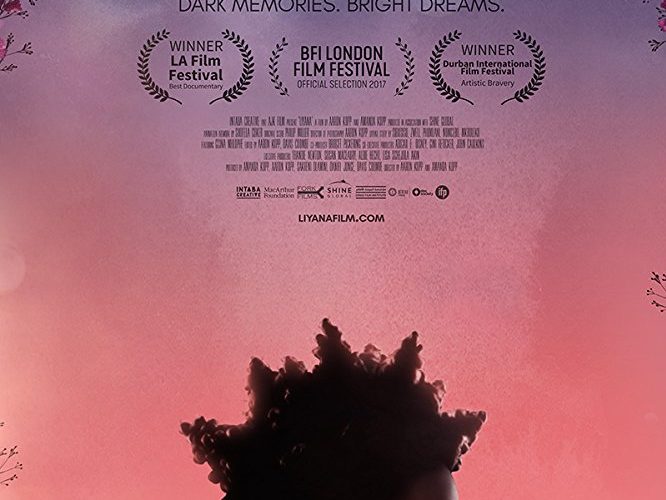 There’s multiple ways to tell stories depending on the message you wish to instill. So when the subject you’re tackling concerns a country like Swaziland with a rampant AIDS epidemic and the resulting insanely high orphanage rate, you can choose a path towards the stark futility of the situation or find a way to unearth the hope that remains despite it. Documentarians Aaron and Amanda Kopp decide to do the latter with Liyana, a unique hybrid wherein fact is projected through a prism of fiction as both a mechanism to educate outsiders and heal from within. They’ve placed their cameras inside an orphanage for children who know little beyond tragedy to watch them turn those devastating experiences into an inspirational work of art that proves their voices matter. They’re filming a project spearheaded by acclaimed storyteller Gcina Mhlophe, one that asks these lost souls to come together and create something with purpose. She empowers these orphans to look inside themselves with pride and introspection, to render their struggles as more than the product of fate. Much of what they put in their fantasy adventure is therefore based upon what they’ve already endured, but Mhlophe shows how they control what comes next. For many this is a foreign concept. They were born into an impoverished life that pretty much guaranteed their parents would die from AIDS, helpless to do anything to prevent a trajectory everyone around them followed as birthright. You couldn’t blame them for embracing a feeling of abject defeat with seemingly nowhere else to turn.

So watching them channel that anger and fear into something more is a miracle. Rather than wallow in subpar conditions under the watchful thumb of caretakers doing the bare minimum like many American depictions of orphanages imagine, these displaced youths are afforded the chance to form a new family bonded by shared experiences so many couldn’t even begin to imagine. They are provided art as an outlet to give their emotions life through a young girl not much different from them. They build this heroine from magazine pictures and place her into a home similar to theirs. They give her a quest to prove her might if for no other reason than to live vicariously through her while cultivating the belief they could one day do the same. The result is a gorgeously animated children’s book plot full of magic, monsters, and courage with a side portion of luck. As the kids tell of Liyana’s actions in voiceover or isolated testimonials, we see her come to life alongside the giant bull serving as her protector. She watches her parents die just like her creators did theirs. She survives a violent robbery like them too only to discover her twin brothers kidnapped by thieves aiming to sell them off. Her pint-size authors are in effect working through their demons with her as an outlet removed from the pain of remembering their own trauma. They come up with scenarios steeped in reality’s often-treacherous destinations rather than happily-ever-afters they don’t believe exist because life taught them to brace for the worst.

Aaron and Amanda Kopp deal in unforgettable juxtapositions along the way, showing Liyana’s brush with death alongside one of the orphan’s visit to the doctor to see whether or not he too is HIV-positive. We watch the kids playing soccer and having a good time as Liyana rides her bull through the forest with determination and grit. We see her arrive at beautiful destinations that risk tempting her away from her mission while the children talk to the camera about their own desire to escape a world that seems to be consuming them whole. The Kopps don’t go to each one of their subjects to hear his/her life story because every one of them put a part of him/herself in Liyana. This character speaks the words they cannot. Mhlophe is shown as an expert tour guide through their imaginations, igniting a spark in them to pull out ideas that simultaneously render Liyana as relatable, aspirational, and unique. They imbue in her their own strength to have survived this long, their intelligence and empathy to problem solve her way out of tough scenarios, and their courage to keep moving forward despite a future all but assured to them. We’re made privy to a literal awakening wherein these kids discover a sense of self-worth and agency that had been all but beaten out of them psychologically. They draw, write, and mold creations that didn’t exist before they decided to make them. They give Liyana redemption and in turn realize they can supply it to themselves too.

The subject matter is unquestionably heavy, but nothing its targeted audience can’t handle even without the shared life experience of those onscreen. If youngsters in the audience don’t quite comprehend the intricacies of the message itself, they should still be inspired to create. The animation is a big help because it is bright and accessible despite its authentic look at the evil in men. The whole also deals in complexities many family-friendly filmmakers are afraid to embrace because they don’t believe their audience can handle the emotional toll. Leave it to a bunch of pre-teens to prove them wrong. These kids know exactly how mature and wise they are to reconcile horror against hope. Without a shred of naiveté, they remind us what it means to overcome.