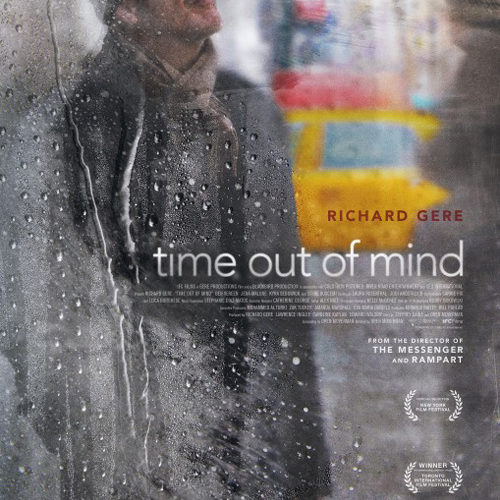 [NYFF Review] Time Out of Mind

Finding a link between the shared title of Oren Moverman‘s third feature film, Time Out of Mind, and Bob Dylan’s 1997 album took a little effort. Moverman co-wrote the script for Todd Haynes’ fantastic Dylan saga I’m Not There, and perhaps it was here that the title resonated and, to the writer-director’s mind, could be grafted onto his latest, Richard Gere-led drama.

Both the musical album and the film share the ramblings of a mumbling and melancholy old man. Gere plays George, who’s assimilating to his new life as a vagabond on the streets of New York City, a difficult task only made harder when viable shelter is patrolled by a flustered landlord (Steve Buscemi). George may not find a consistent meal or bench, but he sustains himself by denying the present. He utters broken pleas such as “there are laws here” as Moverman’s camera studies from afar.

Gere’s performance isn’t building towards a single cathartic or redemptive breakdown. Instead, Moverman’s film guides the character of George to moments of awareness, where the actor transcends his shoddy clothes and wispy beard to become something entirely compelling. George confides in a nurse he’s “always been very good with women.” It’s a fascinating moment because this is George’s askew response to her act of salvation: an offer of shelter and food.

Gere is only as good as his supporting ensemble of character actors and non-professionals. It is the other “forgotten men” of the city and desk clerks that have to listen to George’s exposition explaining the tragedies that have shaped his life. These figures rotate in and out of staccato trips to homeless shelters and public records offices, but the two that leave the greatest impression are George’s daughter, Maggie (a compelling Jena Malone), and his proselytizing sidekick named Dixon (an exuberant Ben Vereen). Dixon is present for Gere’s best moment, when he explodes at the realization of his own depravity — “We don’t exist!” It’s not only a revelation completely antithetical to his most prolific work in films like Pretty Woman and An Officer and a Gentleman, but also a nice reversal from his work in Arbitrage, where he played a wealthy man always in control.

Moverman has also progressed from his debut feature, The Messenger. In that film, the social issues of war and its warriors dominated every frame.  Time Out of Mind also acknowledges the social issues at the core of its story: HIV, racial inequality, violence, and alcoholism are presented as the inherent risks to a life lived on the street. Here, however, Moverman and cinematographer Bobby Bukowski build a visual landscape with slow evocative zooms through windows and precise camera moves. The result is far more accomplished than his previous endeavors.

Time Out of Mind offers a bleak vision of the city, yet it’s appropriately ethereal all the same. Even when characters are situated in front of the Statue of Liberty (an obvious piece of commentary), the surroundings feel foreign. Surprisingly, it is Time Out of Mind‘s audio design that makes the film a quintessential portrait of New York. The sounds of the city, scattered conversations by passing patrons on cell phones or blaring sirens, are overlaid with the primary drama on screen. Often, these glimpses into a grander life — or, perhaps, simply a life other than poverty — are more riveting than the central action.

The film ultimately mirrors the experience of its central character. A story spent in destitute becomes appropriately tedious and repetitive, and thus the narrative threads that carry this film are scattered, only echoes of something grander. At the risk of shattering its delicate creation, Time Out of Mind maintains its detachment and adheres to the confines of George’s meandering life.

Time Out of Mind is playing at NYFF and will be released by IFC Films on September 11th.