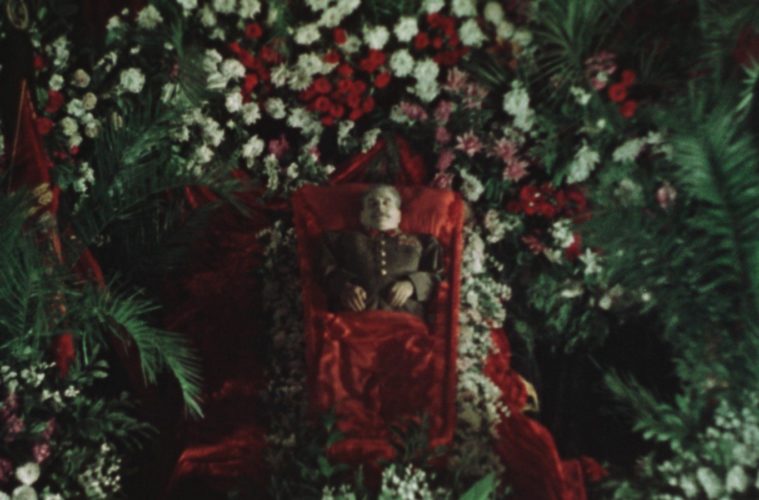 NYFF Review: ‘State Funeral’ is an Immersion into an Ephemeral Moment of Collective Trauma

The death of Joseph Stalin on March 5, 1953 sent political reverberations around the world, marking a significant power shift that would inevitably alter the geopolitical landscape altogether; Stalin, widely controversial but influential nonetheless, had been involved in Soviet politics for nearly three decades–serving as de facto dictator for two–and his passing would inevitably usher in a new era of international policy. Before the torch could be passed and a new form of Soviet politics could become inaugurated however, there would need to be a long funeral service worthy of Stalin’s grandiosity. Prolific Ukranian filmmaker Sergei Loznitsa, continuing the found footage documentary style of latest efforts Maidan, The Trial, and The Event, composes a chronology of the four days of mourning that followed Stalin’s death. Composed of rarely seen archival footage–shot for Soviet film effort The Great Farewell, that would be banned before release by members of the new government–Loznitsa resurfaces the ambiance of despair shared by the leader’s subjects. In doing so, he immerses the audience in an ephemeral moment of collective trauma and separates the funeral from its immediate history, in turn allowing for modern interpretations of Stalin’s regime and its eventual legacy in Soviet history.

Each day of mourning blends into the next as Loznitsa chronologically charts the funeral procession, capturing landmark moments such as the initial announcement of Stalin’s death, the open-casket display of his body at the Hall of Commons, speeches given by politicians Georgy Malenkov and Lavrentiy Beria introduced by future successor Nikita Khrushchev, before Stalin’s final burial at Lenin’s mausoleum. It is difficult to ignore the scale. Sequences depicting large masses of mourners filing into Moscow’s Red Square and the intensity of emotions on individual faces alike logically corroborate such a momentous event, but directly contradict the negative perception associated with Stalin’s Totalitarian regime today.

As poor Russian citizens numbering in the thousands shuffle in line to be a part of the processions in complete silence, apart from a loud PA blaring consolatory and empowering statements overhead, the ways which different political ideologies and cultural experiences exist in tidy bubbles–as opposed to perspectives that represent them universally–become clear. Fascism, generally understood as a negative implement in a modern perspective, was once just another way of life. In hindsight, it is much easier to consider negative impacts and forget the positive ones. A closing title card that qualifies the extent of his oppression notes that “27 million Soviet citizens were murdered, executed, tortured to death, sent to Gulag labour camps, or deported during Stalin’s rule” and that “a further estimated 15 million starved to death,” but this itself conflates significantly different punishments and associate Stalin with certain conclusions that many historians would disagree with. The decision to include these statistics feels reductive for a thinker as distinguished as Loznitsa, and practically rewrites the ambience of the film from somber reflection to one of ridicule. The images, in invoking the pain of the past generation, already make a case for the absurdist qualities of Stalin’s Cult of Personality, but this decision to illuminate only the atrocities seems to question the validity of his followers’ pain. Stalinism did bring about the loss of freedom through strict regulations and many were punished for speaking out, but these actions simultaneously also turned Russia into the industrial and political powerhouse it is today: industries thrived, healthcare was expanded to all citizens, and standard of living, literacy rates, gender equality, and life expectancy were improved drastically. This isn’t to justify the actions of a vilified regime, but only to question the rationale behind simplifying complex systems and Loznitsa’s attempt to manipulate the interpretation of his footage.

The pedantic nature of the ending feels especially detracting on account of the film’s 132-minute runtime and its repetitive thoroughness. It offers little to those unaware of the historical context, and only occasionally manages to reach an affective rhythm outside of it–a result of Loznitsa’s objective rendering of the events as opposed to, say, more abstract efforts that manipulate archival footage or piece together footage from broader sources of work to convey new ideas. Constructed from over 100 reels of material found hiding in plain sight at the Russian state archive and masterfully restored, State Funeral succeeds more plainly as an archival achievement that symbolically overcomes attempts at past censorship.