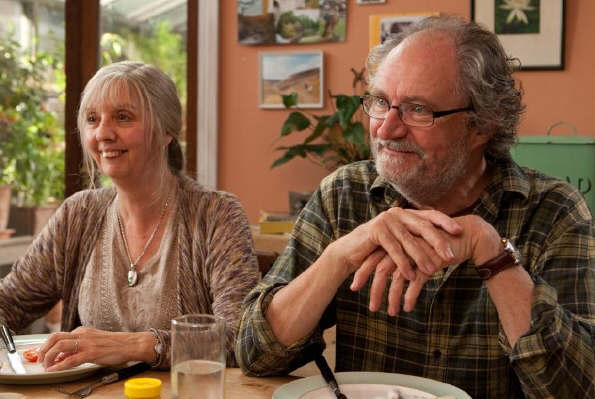 Mike Leigh‘s new film Another Year, like Mike Leigh’s old films, is all about real people and their interactions with each other. This time around, the subjects observed are those that need others and those that need to be needed by others.

Leigh-regular Leslie Manville stars as Mary, a single, middle-aged woman with a penchant for alcohol and a constant stream of talking so as to convince herself, and others, that everything in her life is going just fine. Until she’s had too much to drink, of course. Which is all the time.

At her aid is Gerri (Ruth Sheen), a psych counselor at a local hospital. Gerri’s husband Tom (Jim Broadbent) is well-behaved, for the most part, in letting his wife care to her needy friend. His outspoken moments and reactionary glances make up some of the funniest moments in the film.

The structure of the narrative is from Spring to Winter, season by season. Tom and Gerri (don’t worry, the joke referring to the animated cat and mouse is made) tend to a garden with care while Mary has let her plot overrun with weeds.

There are plenty weeds in Mary’s life, and Manville turns in a grand performance: she’s the other side of Sally Hawkins’ Poppy.

Where the movie loses balance, however, is in its observation of these two sets of people. Tom and Gerri are never judged by anyone. They’re the perfect couple, never once fighting or lulling in interest with each other. Gerri stops Tom a few times from speaking his mind all the way through, but that’s about it.

Even their pitch-perfect son Joe (Oliver Maltman) is allowed to flirt, albeit somewhat cautiously, with his “Auntie Mary” without the slightest bit of criticism from anyone on screen or behind the camera. The only people being judged are those that judge themselves while selfishly looking to others for refuge. As it goes, the drunken rants Mary and Tom’s old friend Ken (Peter Wight) go on are the most honest and insightful as anything that comes out of Tom or Gerri’s mouths. Yes, these people are leeches and yes, there is a line that must be drawn when being their shoulder to cry on, but no, no we don’t need to see them judged so relentlessly over two otherwise well-made, well-acted and well-written hours.

What do you think of Mike Leigh? Will you seek out Another Year in theaters?