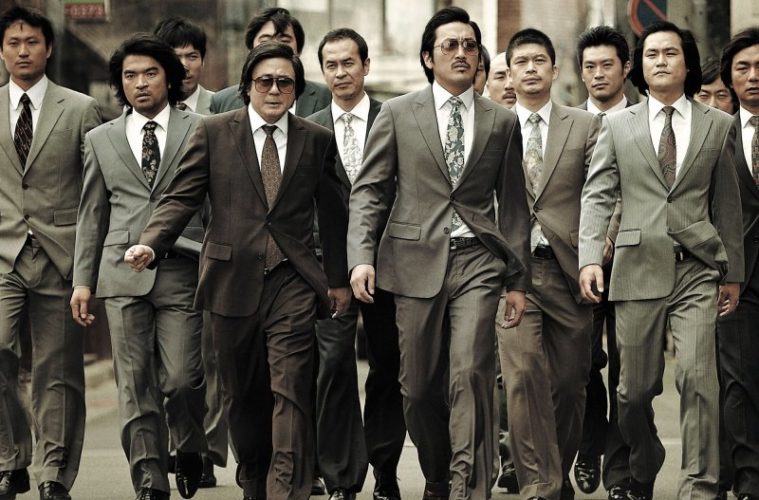 Set against President Tae-woo Roh’s 1990 crackdown on organized crime in South Korea, Bumchoiwaui junjaeng [Nameless Gangster: Rules of the Time] places us into the wild life of a former Busan customs agent and the selfish games he plays with two of the city’s most notorious gangsters. Written and directed by Jung-woo Ha, the film, being hailed as its country’s Goodfellas, sifts through time in order to illustrate this man’s odd trajectory from crooked civil servant to crime syndicate boss while discovering whether or not he was the villain hotshot prosecutor Beom-seok Jo (Do-wan Kwak) believes. With a little black book of high-level officials and important men sharing his clan’s surname in his pocket, Ik-hyun Choi (Min-shik Choi) lets his overactive mouth talk his way into the gang life with promises of loyalty and service. Unfortunately for them, his survivor’s mentality would never cease putting his own wellbeing first. About to be sacked as the fall guy after an inquisition into his department leaves his boss with no other choice but to put the man with the smallest family on the chopping block, luck shines down on Ik-hyun. A discovery of 10 kilos of heroin and the willing participation of coworker Ju-im Jang (Jong-gu Kim) puts him in touch with a gangster, setting the ball rolling on one of the most outlandish rises to the top I’ve seen on screen. Discovering the fence shares his name, Ik-hyun can’t resist the urge to ask for a family tree in his drunken state. From there he learns he’s Hyung-bae Choi’s (Jung-woo Ha) uncle and godfather, cementing their familial bond and soon translating into an unstoppable business relationship. With Hyung-bae’s muscle and clout on the street alongside Ik-hyun’s ability to worm his way out of any legal jam with a phone call to a relative, they own Busan.

Considering all this starts back in 1982, we learn the details through flashback as Jo investigates. Beginning with Ik-hyun’s 1990 arrest and subsequent abuse at the hands of the city’s prosecutor, one call is all it takes to set him free again. Undeterred by the setback, Jo continues the case and uncovers the soap opera that eventually pushes Ik-hyun to the enemy’s side. As hubris reaches its apex for the Chois and hotels and casinos start to go up around the country, only Pan-ho Kim (Jin-woong Jo) refuses to back down in an utter neglect of gang code. Embarrassed and beaten on his own turf, Kim’s vow for vengeance pits the elder Choi against the young on whether to proceed with violence or conversation. Dissention brews within the gang as the police close in, tightening the noose around Ik-hyun at the center and forcing his last play for self-preservation. Brutally violent in quick bursts where men must wield their authority, it’s a pleasant surprise to see Min-shik Choi not be the cold-blooded hound of pain. His Ik-hyun may act tough and even throw a couple punches, but only a plea for pity results when his opponent goes on the offensive. After watching his stoic badass in both Oldboy and I Saw the Devil, seeing him portray a loudmouth in over his head added a welcome level of comedy to the proceedings that I do believe was intentional. The juxtaposition of his physically weak blowhard playing inside a world too tough for him to control is the perfect entry point into the story. His stumbles and resulting smooth talk necessary to wiggle his way back into a position of respect show that while he’s the brain allowing for two separate operations to reach financial heights, he’s also the cause of their unavoidable demise.

Forever smiling as he schemes and plays the boss, Ik-hyun’s rise is too rapid for the simple man’s overdeveloped ego. Hyung-bae is in charge and it’s he who gave his godfather the opportunity to escape a life of squalor and provide for a wife and three young children. Jung-woo Ha embodies the role with a menacing demeanor—covered in tattoos and forever calm and collected without expression until uncoiling with a remorseless fury. Able to show a compassionate side for the man he once rebuked before being chided by his father to respect his elders, he didn’t become the young leader of his own gang through weakness. Following a warped sense of rules standing for honor within his lifestyle, Ha is best when on the offensive. Able to turn Ik-hyun into a sniveling puddle of fear, he demands respect and wields the power necessary to earn it.

Completed by a sprawling cast of heavies and pretend thugs, it’s Jin-woong Jo’s portrayal of Pan-ho Kim that stands in direct opposition to the Chois and whose violent temper eventually allows staunch prosecutor to enter their world. His flashier style and Beom-seok Jo’s incorruptible lawyer mirror American gangster film sensibilities while helping to temper the freewheeling reign of the family Choi. Watching Ik-hyun bounce between them all therefore delights because he’ll stop at nothing to stay on top. His decade-long rise and fall becomes an entertaining yet overlong look into Korean corruption that aligns itself perfectly with its title’s literal translation: War on Crime: The Golden Age of the Bad Guys. Much more apt than Nameless Gangster—especially concerning a man who loved to tell the world who he was and who he knew—Jong-bin Yu has crafted a nice snapshot of the violent greed once running rampant in his country’s streets.