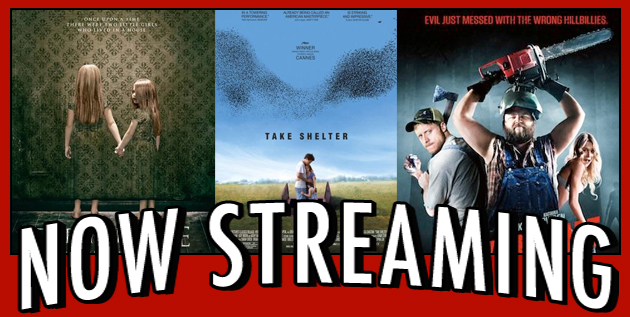 Each week within this column we strive to pair the latest in theatrical releases to the worthwhile titles currently available on Netflix Instant Watch. This week we look at alternatives to Dream House, Take Shelter and Tucker & Dale Vs. Evil.

On the brink of October, haunting tales are lurking in theaters across the country. As two different dads face their fears to protect their families from threats that may be imagined, a pair of kind-hearted hillbillies are mistaken for clichéd maniacs. Want more horror and gore? We’ve got you covered with some ghastly ghosts, freaky thrillers and hilarious horror flicks.

Daniel Craig stars as a husband and father who moves his family from the urban jungle to a lovely home in rural New England only to discover their dream house has a dark past. Rachel Weisz and Naomi Watts co-star. House on Haunted Hill (1959) Vincent Price stars in this creepy classic as Frederick Loren, an eccentric millionaire who lures five strangers to his hill-top mansion with the promise of $10,000 if they spend the night. The festivities begin with a bang when Loren awards all his guests a pistol as a party favor. It’s old school scares and a lot of fun.

The Haunting in Connecticut (2009) Based on In a Dark Place: The Story of a True Haunting, this harrowing horror flick tells the grisly tale of the Campbell clan, a family who found themselves plagued by a vengeful spirit upon moving to their new Connecticut home. Virginia Madsen and Martin Donovan co-star.

Shutter Island (2010) In this Martin Scorsese thriller based on Dennis Lehane’s cryptic novel, Leonardo DiCaprio stars as a U.S. marshal haunted by his past who must find a missing woman on the grounds of an isolated insane asylum. Mark Ruffalo and Jackie Earle Haley co-star.

Michael Shannon leads this Sundance-selected thriller that centers on a family man haunted by visions of the apocalypse. To protect his family, he hollows out a bomb shelter in his back yard to weather the storm. Rising actress Jessica Chastain co-stars. Have a thirst for indie thrillers?

Antichrist  (2009) Controversial director Lars von Trier helms a deeply dark tale of mourning and loss, staring Willem Dafoe and Charlotte Gainsbourg as a couple reeling from the death of their child. As the two seek to lick their wounds at an isolated cabin, things go from bad to weird as rage and grief inspire to genital mutilation.

Turning the killer hillbilly cliché on its head, Alan Tudyk and Tyler Labine play two sons of the soil who are mistaken for murderers by a batch of death-prone co-eds in Magnet’s sidesplitting slasher. Do you love your scares with a spattering of blood and laughs?

My Name Is Bruce (2006) B-movie megastar Bruce Campbell directs and plays himself in this campy horror-comedy, in which the Evil Dead star is a small-town’s only hope to destroy the monster that plagues their community. Full of in-jokes and DIY-chutzpah, this flick is for fan boys/girls only! Ted Raimi co-stars.

Rubber (2010) Also from Magnet, which is quickly becoming a go-to destination for lovers of horror, this quirky flick centers on a tire named Robert who uses his psychokinetic gifts to blow peoples’ minds. Literally.

Trollhunter (2010) Another Magnet release, and one of my favorite flicks of the year, this Norwegian entry into the found-footage genre blends tongue-in-cheek mockumentary humor with some top-notch CGI to tell the tale of three college students whose lives are irrevocably changed when they cross paths with a true Troll Hunter. It’s Jaws meets Waiting For Guffman with a hint of The Blair Witch Project, so basically it’s incredible. Raising Hope (2010) From Gregory Thomas Garcia, the crafty creator of My Name is Earl, comes this quirky comedy series that regularly makes light of dark matters. This subversive sitcom centers on the Chance clan, a white trash family made up of a senile matriarch Maw Maw (Cloris Leachman), high school sweethearts Virginia (Martha Plimpton) and Burt (Garret Dillahunt defying his typecasting as a major creeper), their prom-night son Jimmy (Lucas Neff) who has grown to have a baby of his own with a one-night stand…who happened to be a serial killer. Each week the Chances tackle taboo topics (from sex offender registration to polygamy) with a lithe and irreverent sense of humor, but what really makes this series sing is a truly extraordinary cast. Leachman and Plimpton both scored well-deserved Emmy nods for their fearless portrayals of the oft-topless and always hilarious great-grandma and the word-scrambling ball-busting thirty-something grandma, but each member of this colorful cast of characters deserves praise, from Jimmy’s snarky love-interst Sabrina (Shannon Woodward) to the dead-toothed dog and babysitter (Kate Micucci) to baby Hope herself. (Seriously, the infant’s reaction shots are shockingly apropos and always funny without being awe-inducing.) With season two airing now, you can get a quick catch-up as all of season one is now streaming.