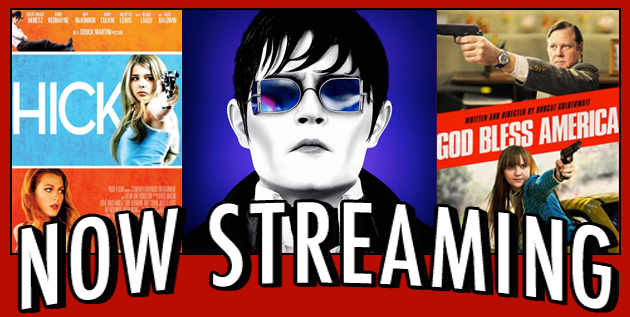 Each week within this column we strive to pair the latest in theatrical releases to worthwhile titles currently available on Netflix Instant Watch. This week we offer alternatives to Dark Shadows, God Bless America and Hick.

Tim Burton brings the peculiar tale of the Collins clan to the big screen. Johnny Depp stars as Barnabas Collins, a long-imprisoned vampire unleashed on the 1970s, where he discovers a colorful batch of dysfunctional descendants. Michelle Pfeiffer and Helena Bonham Carter co-star. Prefer camp with your macabre?

Dark Shadows (1966) Check out the cult classic that started it all. Originally conceived as a moody melodrama, this groundbreaking gothic soap found success following the introduction of tormented vampire Barnabas Collins (Jonathan Frid). From there the Collins family regularly crosses the paths of ghosts, werewolves, and witches. Oh my.

Edward Scissorhands (1990) Or revisit Burton and Depp’s first collaboration, the tale of a modern Frankenstein’s monster with scissors for hands. After his loving inventor dies, Edward (Depp) is left to his own devices in the creepy home on the hill until an ambitious Avon lady comes calling. Winona Ryder and Dianne Wiest co-star.

The Addams Family (1991) Like the Collins clan there’s something strange about the Addams family. This ghoulish group loves the dark side of life and each other, so when a con artist threatens their bond things get creepy and kooky. Make a DIY double-feature and pair it with Addams Family Values. Anjelica Huston, Raul Julia, Christopher Lloyd and Christina Ricci co-star.

Bobcat Goldthwait directs this pitch-black comedy about a terminally ill man (Joel Murray) who decides to use his last days to kill those he feels are an offense to the American way. To his surprise, his quest draws the interest of a 16-year-old girl of like mind. Tara Lynne Barr co-stars. World’s Greatest Dad (2009) Another Bob Goldthwait comedy, this one centers on Lane (Robin Williams) a failed writer who finds an unexpected inspiration when his son dies in a freak accident. To save face, he pens a suicide note on his son’s behalf, and when it becomes an unexpected hit, Lance sees a peculiar opportunity for literary acclaim. Daryl Sabara co-stars.

Little Shop of Horrors (1986) Perhaps my favorite dark comedy, Frank Oz’s adaptation of the musical based on a slapped together Roger Corman effort centers on Seymour Krelborn (Rick Moranis) a “meek little guy” with a passion for plants and his co-worker Audrey(Ellen Greene), a battered beauty with a taste for bad boys. When their jobs are threatened, Seymour unveils an odd little plant he’s been caring for, but as this Venus flytrap draws notice it demands a hefty price from its master: blood! With a remake in the works, now is the perfect time to revisit this cult classic and its catchy soundtrack.

Jack Frost (1996) Another horror-comedy that I have a dark love for, this b-movie centers on a serial killer whose accidental death in a snow bank buries his evil soul into its flakes. When a child makes him into a snowman, Jack Frost unleashes a wintery form of terror on the town. The filmmakers totally embrace the wacky concept, peppering their goofy gore with comical asides. Plus a pre-American Pie Shannon Elizabeth makes a revealing appearance in a shower scene that’s brilliantly bizarre. (And be sure to check the credits for even more in-jokes!) Prefer drama with a gritty edge?

Lymelife  (2008) Before he took on the depravity of America’s back roads Martini explored the ennui of 1970s suburbia in this ensemble dramedy. When a Long Island community feels threatened by an outbreak of lyme disease, family and neighbor conflicts heat up as 15-year-old Scott (Rory Culkin) attempts to win the love of the troubled girl next door (Emma Roberts). Alec Baldwin, Cynthia Nixon, Timothy Hutton and Jill Hennessy co-star.

Savage Grace (2007) Warning: this flick is incredibly hard to watch chiefly because of its central, incestuous relationship. Based on the shocking true story of Barbara Daly Baekeland who was murdered by her formerly adoring son, this drama unfolds a tale of a young man (Eddie Redmayne) whose relationship with his mother (Julianne Moore) goes beyond love, and into sex, twisting him into a merciless murderer. Tom Kalin directs.

Sympathy for Delicious (2010) Mark Ruffalo’s directorial debut is set in the thick of the rough streets of Los Angeles. There, a crippled DJ—called Delicious—discovers he has an uncanny ability to heal the sick. But instead of taking the route of evangelism or charity, he exploits his gift to become a rock star. Orlando Bloom and Laura Linney co-star. Griff the Invisible (2010) Upon this offbeat Aussie outing’s U.S. release last summer, I wrote, “The feature film debut of writer/director Leon Ford, Griff the Invisible centers on an average man who dreams of being a superhero with the power of invisibility. Ryan Kwanten, best-known Stateside as the tan and blonde Southern dynamo Jason Stackhouse on the sex and blood-soaked vampire soap opera True Blood, stars as Griff, a pasty and bumbling young Aussie with no social skills and a truly dorky haircut. But there is more to Griff than his placid appearance lets on. Sure, by day he is a mild-mannered office drone, but by night he is a masked and muscled vigilante, who prowls the streets of Sydney to protect the innocent from the shadow of evil!” It was the concept and star that caught my eye, but the whimsical and warm execution that won me over. Griff plays out with playfulness and imagination that makes it what I’d hoped The Science of Sleep would be, bolstered by a hero and a romance that I root for rather than loathe. With a mix of fantasy and DIY-moxie, Griff goes into a place I haven’t seen the superhero genre go before, and the results are uniquely remarkable. [My Full Review.]