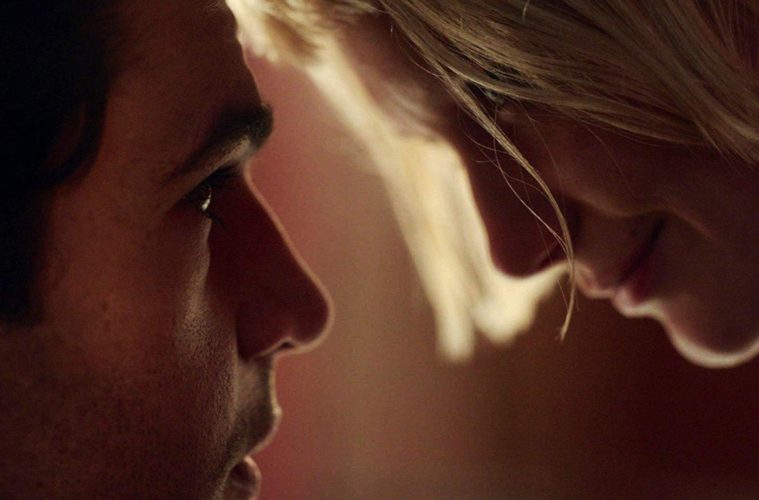 Nicolas Pesce on ‘Piercing,’ His Relationship with Violence, and Being Inspired by Brian De Palma

With his debut film The Eyes of My Mother writer-director Nicolas Pesce crafted an isolated piece of cinema steeped in psychopathy, trauma, and suggestions of graphic violence. Instantly, it was clear he was a new voice in genre cinema, with the film premiering at Sundance in 2016 and demonstrating a strong grasp on atmosphere and stark terror. With his second film Piercing Pesce adapts Ryū Murakami’s novel of the same name. Here, Pesce paints a different picture from a similar easel as Eyes: chimes of exploitation cinema and a fumbling central psychopath collide with recurring themes of isolation and severely repressed trauma.

Now, there’s a playful edge to things; talking babies, trauma bugs, and murder-as-performance all texture a film of squeaky-clean psychopathy and squelchy-bloodletting. It’s pitch-black comedy, and it’s sure to polarize. Piercing signifies a director who is pushing himself to experiment, torment, and not fear getting messy. For with the film’s release, we sat down with Pesce to discuss the line between implication and depiction, visualizing theme, and the violent use of can-openers.

The Film Stage: With Piercing, how did you draw a line between implication and depiction—on a narrative as well as a visual level? And did you have any sort of reference points or guidelines you used to determine how to walk that line?

Nicolas Pesce: I think part of the fun of the movie is how much it withholds, particularly narratively. And I think that it works in the movie’s favor, and for the audience who know different things than the characters know. That’s the game the movie plays; where it uses expectation to bring the audience along and give you cues to think one thing, but then the movie constantly subverts it and as soon as you kind of feel like you’re up to speed—and you’re on the same page with the characters—you realize that the characters are elsewhere. So, the characters are chasing each other, but it’s also like one added layer of the audience also participating in that.

Some of that was baked into the book. So, it was a matter of, how do we tease that out? How do we tease that out through film? And in terms of the visual stuff, particularly when it comes to what we show in terms of violence, I think the fun relationship that this movie has with violence, uh, well — not that a relationship with violence is ever fun…

But the…unique relationship to violence that this movie has, is that traditional violence is kind of threatened throughout the movie, but it doesn’t ever actually happen. The violence that does happen is with everyday objects that would not normally be scary; like, I don’t think a can-opener is scary [Laughs]. My first movie [The Eyes of My Mother] has a lot more violence, but a lot less of it is shown. With Piercing, I wanted to do the opposite: show more of the violence onscreen but take these small, everyday, ordinary objects and make them truly terrifying.

Often times, viewers—especially those who aren’t fans of genre cinema—have a difficult time looking past the viscera to the points and the meaning that are around and inside of that bloodshed. Does the mainstream misrepresentation and misreading of horror frustrate you, or is it just destined to always be this way, perhaps for the better?

I think, particularly with violence, it’s one of those things that every audience reacts differently to. Everyone has a unique relationship with violence that makes them feel a certain way about it. You know, I think that some people find it cathartic to see it on screen, some people can’t even look at it. Either way, I think that’s okay.

There are visual components in both The Eyes of My Mother and Piercing that speak to a kind of slow cinema interest; they’re very observational at times. When you’re prepping a film, do you look to bring specific aesthetic sensibilities to each script you write, or does it first depend on the story and the material and what they require?

It starts off as whatever pops into my head. I sort of have a mental library of movie moments that are perpetually collaged, whether that’s to contextualize movies, or my own life, or my own movies. So, I think that it starts with whatever naturally comes to me—as I’m writing it, reading it, whatever—and then once I know what it looks like in my head I start realizing more where those references are coming from. Sometimes I’m not aware of it, but by the time we were making Piercing, I knew we were making a giallo movie.

Going off of that, this feeling of the commonplace is counteracted by the viscera and the sense of psychopathy in the air from Reed.

Which is punctuated by the sharp cutting. While violence and observation are far from being mutually exclusive, they create an interesting dichotomy in Piercing, and sometimes an emotional detachment or distance. How do you go about balancing these visual and conceptual ideas during prep and also in the edit?

It’s really on a case-by-case basis. I think something that’s always been fun for me about filmmaking is that there’s always been a level of experimentation to it. There’s always discoveries that come during every stage. There’s this idea that starts in the book; you’re in their perspectives but you don’t actually know what’s going on.

So, for each character, the things that are going on in their heads are drastically different. So, I thought, how could we communicate these two worlds, but together in the same place, but so disconnected? So, very quickly I was thinking split-screen. Part of it is stylistic—I love Brian De Palma, and he dealt very much in the wheelhouse of what we were doing—but it also conceptually tied in really nicely, this kind of idea of contrasting views of the same thing.

So, we had always known that split-screens were going to be an element of the movie. But initially, it was only planned for the one sequence with Reed on the phone with his wife. And, as we were editing, we were like, this does work the way we wanted it to—where can we find other places to do it? And so, the two other places are key character moments; the first is where Jackie and Reed meet for the first time, and we’re showing how different their lead-ups are to the same moment.

Then, at another moment, Jackie and Reed finally think they’re on the same page—they’re flirting on the couch, they both think they know what’s going on, and they’re both with it—and there’s a moment where something is off, and they both don’t know what’s wrong but they realize they’re on the same page, and we jump back to split screen again. So, you have to find techniques that play into the stylistic choices that you’re trying to make, but it also has to be an element that’s helping the narrative or at least the emotion along, as well.

The Eyes of my Mother has a rural, isolated setting and also depicts severe psychosis and trauma, but I’m curious as to what new or different energy you felt from the setting of a modern city?

Well, I think that the city in Piercing functions similarly to what the countryside does in Eyes, but in a different way. In Piercing, you have this city where there’s thousands of lights and little worlds where are these people are living, but you never see a person on the street. You never really see another person except for our main characters.

And it’s this idea—I was living in New York at the time—that you could be out in the middle of nowhere, or be in the most densely-packed place in the world, and you can still feel loneliness and it can still be so isolating. So, even if there’s millions and millions of people around, it doesn’t mean you’re any less isolated. If anything, an empty city screams that even louder than the countryside did. So, it was kind of an interesting counterpoint to the idea that like, it isn’t just about being in the middle of nowhere, it can feel like that anywhere.

Piercing is now in theaters and available to stream.