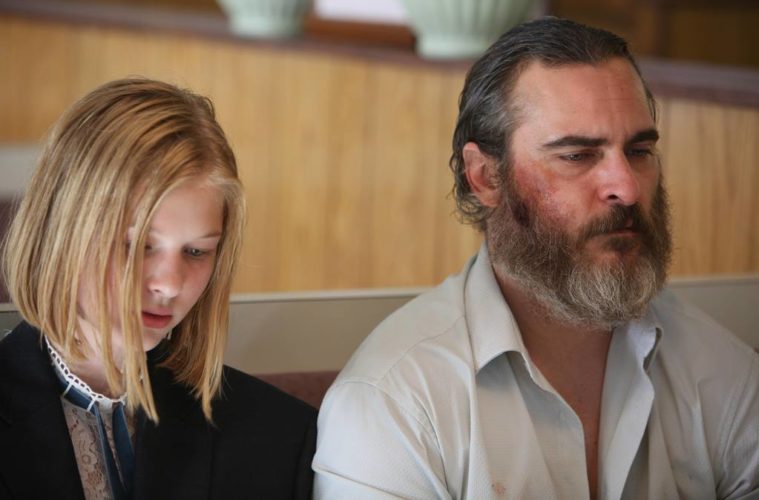 New to Streaming: ‘You Were Never Really Here,’ ‘Lean on Pete,’ ‘Ismael’s Ghosts,’ ‘Ready Player One,’ and More

The cinema of Kelly Reichardt lives in quiet, tender observations with deeply rooted characters and location. Even when adding a thriller element as with her last feature, the overlooked Night Moves, her style is never compromised. Her latest feature, Certain Women, is a loosely connected three-part drama adapted from the short stories of Maile Meloy. It’s perhaps the purest distillation of her sensibilities yet as she patiently explores the longing for human connection in a world where men too often get prioritized. – Jordan R. full review)

I’m not certain if the truth ever came out about that evening’s events beyond speculation, but I don’t think anyone would question the believably authentic script that Taylor Allen and Andrew Logan wrote for Chappaquiddick. They depict that night with the melancholy and hopelessness Ted (Jason Clarke) would have felt so soon after the death of his third brother. It was a time of self-reflection rather than political aspiration, one forcing him to question how far he wanted to go. Was the Senate enough? Was he fighting for his brothers’ legacies, his father’s (Bruce Dern’s Joe Kennedy Sr) ambition, or his own desire? Add some alcohol and the faces of Bobby’s former secretaries surrounding him with optimism that he could persevere and you can imagine the dark, haunted thoughts he’d have. – Jared M. (full review)

A couple grieves the loss of their child, a group of adolescent soldiers ponder the sense of life spent waiting for war. Emerging therefrom is a contemplation on the Israeli fate both eloquent and uncommonly refined. Demonstrating tremendous narrative versatility that sees him switching gears between emotionally heightened chamber drama and lively, theatrically enhanced interludes, Maoz treats the sensitive subject matter with the gravity it deserves while using moments of levity or visual pizzazz to drive home his most intrinsic points. The breadth of the Jewish experience opened up by this tonal richness is kaleidoscopic, breathtaking. – Zhuo-Ning Su

Pasolini included an “essential bibliography” in the opening credits of Salò, or the 120 Days of Sodom, proffering five philosophical titles by the likes of Roland Barthes and Maurice Blanchot to help viewers navigate his rich and daunting Sadean masterpiece. The closing credits of Arnaud Desplechin’s Ismael’s Ghosts also feature a reading list that could be called essential. Of the four authors listed therein, one in particular might hold the key to interpreting Desplechin’s exhilarating, overflowing mindfuck of a movie: Jacques Lacan. – Giovanni M.C. (full review)

Few directors are in tune with the rhythms of authentic human behavior than Andrew Haigh. Following Weekend and 45 Years, he expands his scope with Lean on Pete. His immense eye for camera placement/movement and blocking makes it a thrill to watch, and it’s also a deeply empathetic tale of a boy finding friendship while at a dead end in life. Haigh may not be from America, but there’s few more accurate depictions of this country in cinema this year. – Jordan R.

The Legacy of a Whitetail Deer Hunter (Jody Hill)

By most all accounts based on its SXSW reactions (including our own), The Legacy of a Whitetail Deer Hunter was a disappointment. However, I’ll eagerly watch anything from the director of Observe & Report and creator of Eastbound & Down and Vice Principals. And with Jody Hill’s comedy starring Josh Brolin and Danny McBride arriving straight to Netflix this week, it’s accessibility makes it that much easier a decision. – Jordan R.

After his acclaimed debut We Are Still Here, Ted Geoghegan is back for his follow-up. “What at first feels put-on becomes lived-in; as actors sink into characters and grisly displays of violence allow for direct confrontations with suffering, Mohawk offers a raw and earnest condemning of the white man’s historical and ever-present atrocities that feels particularly urgent today,” Mike Mazzanti said in his review. “Shot in only natural light on actual Mohawk land, Geoghegan makes it clear that even with little means he can still deliver sheer affect.”

Ready Player One is an abomination of a novel, but it was never going to be that bad as a movie. If nothing else (and frankly, there may be nothing else), Steven Spielberg is an infinitely better director than Ernest Cline is a writer. For the auteurists out there, this film’s most obvious sibling in Spielberg’s oeuvre is Tintin, as it similarly exploits the unlimited, camera-less potential of all-CGI worlds for extraordinarily elaborate sequences. Anyone can do a long take, but not everyone will do a long take that pivots into a rapid zoom in on a subject. But Tintin is a supercharged Indiana Jones adventure; Ready Player One doesn’t merely up the scale but overcrowds itself. The scenes of millions of things happening at once are skillfully made, to be sure, but they’re still visually busy to the point of numbness instead of energization. The action has verve but no soul. – Dan S. (full review)

Where is Kyra? (Andrew Dosunmu)

So much of so many film festivals — Sundance especially — feel enormously focused on metropolitan life, New York City in particular. In Where Is Kyra?, director Andrew Dosunmu finds fertile ground in this well-worn location. Starring an against-type and utterly fascinating Michelle Pfeiffer as the titular Kyra, the film narrows in on the tragedy of getting old in America. – Dan M. (full review)

On the surface, Jonathan Ames’ You Were Never Really Here seems like an odd fit as source material for a film by Lynne Ramsay. Ames’ novella is a pulpy genre exercise about a hard-bitten vigilante, one of those lone-wolf types who abides by a strict code of ethics and practices his chosen métier with fanatic professionalism. It’s the kind of character that usually appeals to macho filmmakers such as Jean-Pierre Melville or Walter Hill, not to a poetic feminist of Ramsay’s kind. Unsurprisingly, she’s appropriated the material for her own purpose, paring down the already slender narrative and plunging deep into the tortured psychology of its protagonist. The results are breathtaking, and You Were Never Really Here stands alongside Claire Denis’ Bastards as one of the most ferocious indictments of systematic abuse of power and gender violence ever projected on a screen. – Giovanni M.C. (full review)

Taxi Driver
Woman of the Year

So Long Enthusiasm
Alice and Martin
The Hymns of Muscovy
Carolee, Barbara and Gunvor
Creature Companion
Lourdes
The Tree