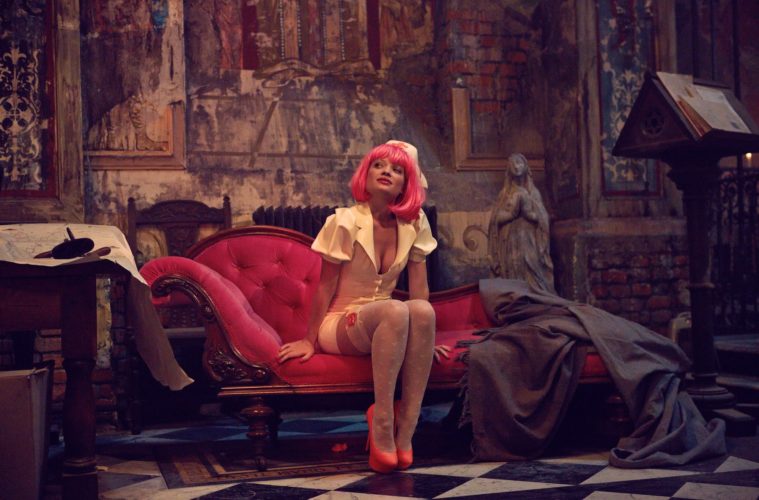 Marvel should take what Captain America: The Winter Soldier does and use it as the rubric to follow with subsequent phases. Iron Man 3 does well using what happened in The Avengers as a way to evolve its lead and work towards the dark, scary future our world is becoming in real life and in the comics to warrant such a need for superheroes in the first place. But Tony Stark is a sarcastic genius we either aspire to be as cool as or begrudge his smug sense of entitlement despite saving America numerous times. Steve Rogers (Chris Evans) is the exact opposite. He’s a regular Joe who risked his life just to attempt being a hero; a man who lost decades sacrificing himself for freedom’s salvation; and the one man strong-willed enough to corral the egos surrounding him and stand with unwavering loyalty to those he serves. – Jared M. (full review)

The Dog is a lively, epic documentary biography of John Wojtowicz, an anti-hero of sorts in New York’s gay rights movement. A later episode in his life would be immortalized in Sidney Lumet’s 1975 film Dog Day Afternoon and while that remains a masterpiece, The Dog, shot with Wojtowicz from 2002 till his death in 2006 is a complete biography, going beyond Lumet’s film and Pierre Huyghe’s 1999 installation The Third Memory. That project featured, like The Dog, a direct address by Wojitowicz walking us through the details that Hollywood, well, made more “Hollywood” in Dog Day. – John F. (full review)

Kevin Costner built his career as a movie star on one American Pastime. With Draft Day, directed by Ivan Reitman, we get the aged actor’s continued attempt at a leading man resurrection via the “new” American Pastime. Trading the glove for the pigskin, Costner stars as Sonny Weaver Jr., the much-maligned General Manager of the Cleveland Browns. It’s the morning of the NFL Draft and Sonny has just traded for the number one pick. Over the course of one day, our man will face the possible loss of his job and his girlfriend, played here by a very-game Jennifer Garner. – Dan M. (full review)

Relationships are never simple and they certainly don’t feel easy in Jealousy. However, there is a seeming simplicity to the filmmaking, courtesy of veteran filmmaker Philippe Garrel, whose latest film finally arrives in United States after a year-long festival tour. Many of the shots are static, locations are kept to a minimum and the script revolves around one couple and their tumultuous relationship. One character in particular, Claudia (Anna Mouglalis) struggles with her desires, passions, and insecurities, affecting the more stable of the two. – Will M. (full review)

Matt Wolf’s Teenage is an awfully bland telling of an interesting story. Combining media, including archival materials with some newly shot footage, it traces the development of the adolescent. Early on it claims that “adolescence is the new birth,” a post-war, post-Industrial Revolution phenomenon with the improvement of child labor laws. Based on the book by John Savage, part of the problem is the narration. Found footage documentary is a powerful genre, with admirable essay films employing the technique, notably by two British masters. Julian Temple‘s London: The Modern Babylon was a rare overlooked gem from the Toronto International Film Festival last year and Terence Davies has also used this technique to unpack truths about his life, sexuality, and location. – John F. (full review)

If he were to only craft The Decalogue, Krzysztof Kieślowski would be considered one of our greatest filmmakers, but along with that 10-part series and stellar stand-alone features, before he passed the Polish master gave us the Three Colors Trilogy, made up of Blue, White, and Red. Each distinctly of their own, they feature perhaps Juliette Binoche and Irène Jacob‘s finest as Kieślowski vividly weaves through tragedy, fate, and even comedy. Aside from their must-own box set, it’s been on Criterion’s Hulu+ channel for some time and now the trilogy has newly been added to their iTunes collection. – Jordan R.

To Be Takei (Jennifer M. Kroot)

One of the most iconic members of the original Star Trek cast, George Takei has reinvented himself over the years to stay relevant in the cultural zeitgeist of our times. Using his magnetic charisma and positivity he has become a notable advocate for gay marriage, an important voice in recognizing the horrors of the Japanese internment camps all while delighting millions daily with his popular Facebook posts. The documentary chronicles the day to day life of George and his husband Brad while exploring the trajectory that made Takei who he is today. While the film is fun to watch, especially for fans of the luminary actor, it cannot escape the feeling that it was originally intended to be a reality show, which would probably be a better fit for the antics of George and Brad. – Raffi A.

Profiling the Electric Daisy Carnival, an annual concert that takes place in a sprawling Las Vegas stadium, this 3D concert documentary takes you into the heart of EDM culture. By following around several attendees who travel far and wide to attend this annual orgy of neon lights and bass thumping music, the film sometimes feels like a glorified advertisement for the festival. It also glosses over the rampant drug use prevalent at these types of events. However, the experience as a whole is nearly as fun as attending the concert and it’s hard not to dance in your chair along with the thousands of concert goers experiencing the ecstasy of the journey. – Raffi A. The comparisons between The Zero Theorem and Terry Gilliam’s most-beloved film are inevitable: dystopian sci-fi, a looming corporation, one lone man navigating this future yet, hopelessly, a drone to the very end. But Terry Gilliam better damn well have a reason for blatantly positioning his newest as a return to Brazil. The issue at hand is that, ultimately, The Zero Theorem seems to have no justification for itself, despite the potential of a wealth of contemporary issues, whether it’s  the technological overload of social media or its ensuing series of political contradictions. Of course, the ultimate irony of this film is that it revolves around the old thematic chestnut of pointless existence, yet ultimately finds little reason for its own. – Ethan V. (full review)

Go For Sisters
Great Expectations
Thanks for Sharing
The Unknown Known