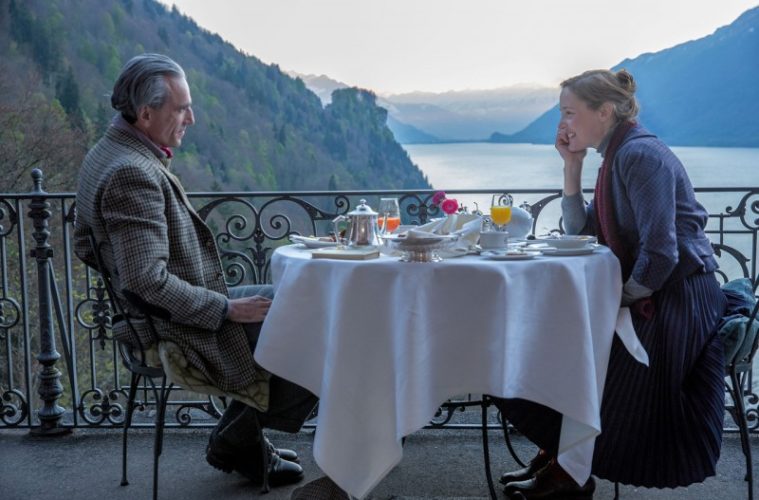 All the Money in the World (Ridley Scott)

The bar has never been lower for Ridley Scott. Depending on how charitable you are willing to be to the director, he has been in a slump for either one, two, or three decades. And then, of course, there are matters outside of his control: with a finished All the Money in the World in hand and ready for a prestigious Christmas release, the long-gestating public revelation of Kevin Spacey’s crimes forced Scott to cut the second-billed actor. He set out to replace him with Christopher Plummer having roughly a month to spare. The bar for All the Money in the World then became not a question of “could Ridley Scott deliver a good movie” but rather “could Ridley Scott deliver a movie at all?” – Nate F. (full review)

There’s a bargain underlying the whole of Atomic Blonde, wherein director David Leitch wavers between its more cheeky qualities and its adherence to the conventions of generic spy fare. The film is, by definition, “cool” in every sense. Despite some wonky plotting best described as Diet John le Carré and a heavy-handed soundtrack that occasionally gets in its own way, Charlize Theron plows full steam ahead with a taut precision and a physicality commanding every moment with an icy ferocity. Thankfully, this helps you ignore the moments where Leitch employs a somewhat masturbatory, Nicolas Winding Refn-esque tendency to remind you how fucking “cool” it all is. – Conor O. (full review)

Although best known for his collaborations with the Safdie brothers, including their latest–and perhaps greatest–Good Time, writer Ronnie Bronstein is also a director. Frownland, a divisive character study met with a whole spectrum of reactions upon its festival debut, has now been restored and is streaming on FilmStruck, along with a 36-minute conversation between Bronstein and Josh Safdie. – Jordan R.

Relationships are never simple and they certainly don’t feel easy in Jealousy. However, there is a seeming simplicity to the filmmaking, courtesy of veteran filmmaker Philippe Garrel, whose latest film finally arrives in United States after a year-long festival tour. Many of the shots are static, locations are kept to a minimum and the script revolves around one couple and their tumultuous relationship. One character in particular, Claudia (Anna Mouglalis) struggles with her desires, passions, and insecurities, affecting the more stable of the two. – Will M. (full review)

Take a portion of The Devils, add a splash of The Witch, a heaping of Monty Python, and then douse it in the comedy of today and you have The Little Hours. Set in a 1347 medieval Italy, Jeff Baena’s follow-up to Joshy packs an even bigger cast — including Alison Brie, Dave Franco, Kate Micucci, Aubrey Plaza, John C. Reilly, Molly Shannon, Nick Offerman, Fred Armisen, Jemima Kirke, Adam Pally, and Paul Reiser — and marks a step forward in his directorial style, even if the comedy ends up running out of steam. As our trio of nuns over-indulge in sacramental wine and take part in God-forbidden sexual desires, the cast exudes a lovable charm, despite the nagging sense they had more amusement making it then the audience has watching it. – Jordan R. (full review)

As we await Harmony Korine’s forthcoming Matthew McConaughey-led hippie movie The Beach Bum (a Cannes debut, perhaps?), MUBI is now streaming two of his most essential features from the aughts: the unclassifiably off-putting (in a fantastic way, of course) Trash Humpers and Mister Lonely, which follows the journey of a Michael Jackson impersonator (Diego Luna) who takes up an adventure with a Marilyn Monroe impersonator (Samantha Morton). Each with their own shades of peculair, they make for the ideal double feature for those that have only seen the director’s Spring Breakers. – Jordan R.

Molly’s Game is slick, flashy, highly entertaining, and hugely forgettable. Considering that it’s the directorial debut of Aaron Sorkin, that may come as a surprise. Sorkin is, of course, the much-imitated writer of The West Wing and The Newsroom. But perhaps his scripts for Moneyball and Steve Jobs are more relevant here. Both are based on true stories… just like Molly’s Game. Both are centered around tough, forceful protagonist… just like Molly’s Game. But when looking at this trio, Molly’s Game is far and away the lightweight. – Christopher S. (full review)

Paddington 2 is a genuine delight, a sequel that improves upon its (very good) predecessor. It is also the rare family film that has appeal for everyone in the family. As with 2014’s Paddington, director Paul King has zeroed in on the inherent magic of Michael Bond’s classic stories while incorporating scores of Wes Anderson-esque sight gags. Plus, there is a game cast of British heavyweights — Sally Hawkins, Hugh Bonneville, Jim Broadbent, and, this time around, a superb Hugh Grant — and gorgeous London locations. Most of all, there is the titular bear himself, a wondrous CGI creation sweetly voiced by Ben Whishaw. It is not hyperbolic to call Paddington one of the most adorably life-like computer-animated characters in cinema. He is the anti-Alvin, Simon, and Theodore, an anthropomorphic triumph whose interactions with humans are always believable. – Christopher S. (full review)

If Phantom Thread is truly Daniel Day-Lewis’ final role, as the actor has stated, one might imagine a physical and mental strain rupturing across the screen the likes of which we haven’t seen since Daniel Plainview. That Reynolds Woodcock exudes anything but those qualities is one of the many surprises Paul Thomas Anderson has in store with his sumptuous period drama. Although there’s an egomaniacal vein that runs through that character, an elite fashion designer, there’s also a sly tenderness and comedic warmth that gives startling life to this shape-shifting relationship drama. Deeply engrossing and playful as it seamlessly weaves between romantic, unsettling, funny, and back again, Phantom Thread is defined by the women in Reynolds’ life (played by the astounding Vicky Krieps and Lesley Manville), and it’s a joy to see their three-way psychological game unfold. – Jordan R.

When The Bough Breaks
Battles
Vladimir And Rosa
Fortune Teller