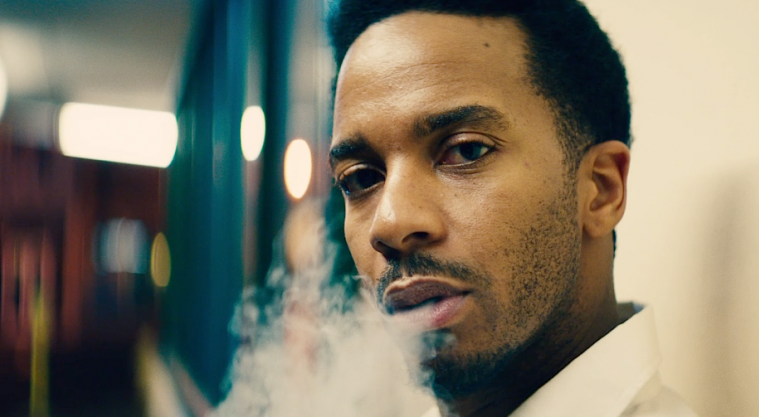 Author: The JT LeRoy Story relives the literary hoax of the early aughts, the truly weird and out-of-control tale of JT LeRoy. An allegedly gender-fluid HIV-positive son of a West Virginia truck stop hooker, he rose to the heights of indie stardom befriending the likes of Courtney Love, Shirley Manson, Lou Reed, Michael Pitt, Billy Corgan, and filmmakers Gus Van Saint and Asia Argento (both would “adapt” works by LeRoy). An anonymous experiment originally conducted by Laura Albert, the myth grows out of control when she hires Savannah Knoop, her sister-in-law, as an avatar. The real Laura Albert had been described by media accounts as a Brooklyn housewife, but here director Jeff Feuerzeig dives deeper. – John F. (full review)

The film adaptation of a satirical novel about American soldiers returning from combat to be celebrated at home by a people that can never fully appreciate their sacrifice — as directed by the incredibly earnest Ang Lee. They feel like strange bedfellows, and the result, Billy Lynn’s Long Halftime Walk, proves both messy and inspiring. – Dan M. (full review)

In the opening scene of Olivier Assayas’ 5 and a half hour epic Carlos, a man we don’t know wakes up in a bedroom, kisses a naked woman goodbye, walks outside to his car, checks the car for any attached explosives and steps in inside. The car explodes. It is a cold, calculated and brutal opening to a film that, in many ways, is just that: a cold, calculated and brutal look at the life of a terrorist. In combining the verite style of Pontecorvo’s The Battle of Algiers with Steven Soderbergh’s stubborn first-person telling of one man’s story in Che (our antihero is in nearly every shot), Assayas offers his viewers little space to breath, or hide, from the primary subject. – Dan M. Movies about making movies often get a bad rap; there’s just a presumed pretentiousness that goes along with watching filmmakers and actors defending their craft. So when it turns out that Clouds of Sils Maria is actually a beautifully directed and acted defense of the timelessness and universal value of storytelling in all forms, what could have been a European Birdman actually becomes something so much more. – Brian R.

With only a solitary passing mention of The Avengers, Doctor Strange is as stand-alone an adventure as we will get from Marvel — prior to a mid-credits sequence, at least. As explained by a master of the mystic arts, Wong (Benedict Wong), the Zen-exuding good guys here are meant to protect a mystical realm outside the physical one we’ve seen endangered thirteen times prior in the MCU. This higher, inherently more important calling pleads for more demanding visual effects, and it comes in psychedelic spades throughout director Scott Derrickson’s origin story. But despite all the aesthetic glee tied to infinite dimensions and symmetrically-collapsing architecture, the “origin” of Doctor Strange feels disappointingly rote and the “story” is little more than a series of groovy platitudes relayed to Benedict Cumberbatch as he jumps around the universe — or, more accurately, two-to-three primary locations. – Jordan R. (full review)

Over the course of the European refugee crisis, the name Lampedusa became so fraught with political agenda one could easily forget it’s an actual place with inhabitants and their everyday worries, a destination millions died trying to reach from across the Mediterranean Sea. The genius of this deeply affecting documentary, then, is how it never breaks into the blame game but simply restores, with disarming, enchanting poise, the human aspects of a tragedy happening right under our eyes. In this time of hyperbole and judgment, hearing what a child with a slingshot has to say and having the stories of the nameless and displaced told through their silent faces prove to be riveting, essential viewing. – Zhuo-Ning Su

Guy and Madeline on a Park Bench (Damien Chazelle)

Before he made La La Land, Damien Chazelle launched his directorial career with a musical — one of a much smaller scale than his sure-to-be Oscar winner. Guy and Madeline on a Park Bench, which premiered back at Tribeca Film Festival in 2009, is a black-and-white, 16mm film, which Chazelle also wrote, produced, co-edited, and acted as director of photographer. Following the break-up of a jazz trumpeter and graduate student, there’s certainly traces of what Chazelle would go on to make, albeit in a much more humble setting here. – Jordan R.

To begin, we must acknowledge a painful fact: omnibus features are only as strong as their weakest link, and it’s clear that production company XYZ Films learned from its past. XX, thankfully better than the company’s recent Holidays, features four female-directed psychological horror shorts that in large part take on motherhood, domestic life, and parenting. Perhaps it should have stopped there, with two strong stand-outs (Annie Clark, aka St. Vincent, with The Birthday Party, and Karyn Kusama’s Her Only Living Son), the decent The Box (by Jovanka Vuckovic), and the weak link, Roxanne Benjamin’s Don’t Fall. It was as if the best three followed a carefully prescribed assignment; Don’t Fall attempts to jam a feature’s worth of suspense into a short that needed a lot more build-up. Also at odds with the tone is Sofia Carrillo’s beautiful, gothic interstitials of cracked porcelain dolls roaming around a dusty home. While impressive in their own right, they feel like an audition for a future, creepier project. – John F. (full review)

Before I Go to Sleep
Milk