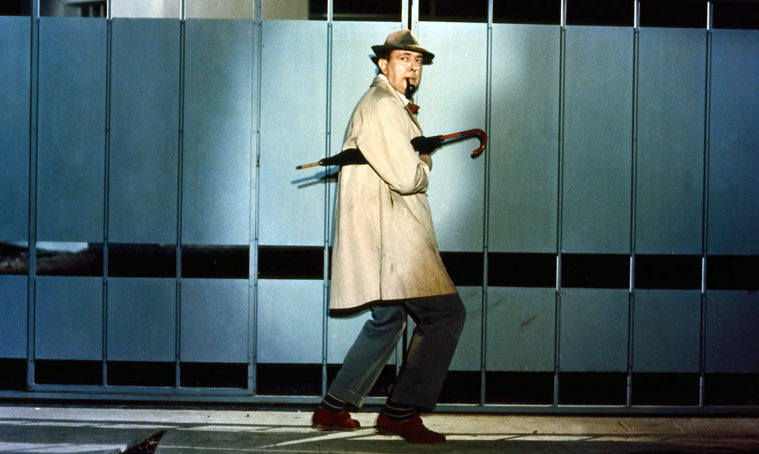 Sure, the film has some flaws. I think Nolan‘s visual style suffers with the absence of his usual collaborator, Wally Pfister, though Hoyte van Hoytema still shoots a beautiful film. All the same, Interstellar swings for the fences, and while it might throw out its shoulder and stumble on a twisted ankle in the homestretch, I’ll be damned if the ball doesn’t fly high over the fences and the runner doesn’t get the run (to stretch a metaphor to its breaking point). Nolan finds an incredible emotional depth in his material, performers, and narrative, making this the first of his works to bring tears to my eyes. The score is a bombastic overture perfectly in line with the starscapes and planets on display, and the overflowing optimism about humanity’s ability to reach to new heights makes this a powerful, worthy cinematic experience. – Brian R.

Jacques Tati is a greatly missed voice in the world of filmmaking with his often nearly mute comedy and his ambitious visual style. One can now stream a great deal of his newly restored work (M. Hulot’s Holiday, Mon Oncle, Playtime, Trafic, and Jour de Fête) thanks to Hulu’s Criterion channel. – Jordan R.

A chance oddity has occurred in the great European festivals this year. With no clear discernable connection between them, biopics of arguably the three most famous members of the infamous 27 Club have coincidentally surfaced in Berlin, Cannes and now Venice consecutively. Bret Morgen took Kurt Cobain to the German capitol with Montage of Heck; Asif Kapadia brought Amy Winehouse to the south of France; and now acclaimed documentary maker Amy Berg brings her study of Janis Joplin to the Lido. Janis screens in the documentary-heavy Out of Competition selection and, as far as these things go, it’s a fairly generic depiction. Meteoric rise? Check. Seminal tunes? Check. Tragic fall? Check. But hey, if it ain’t broke, don’t fix it. – Rory O. (full review)

The undeniable and frankly fatal issue with any prequel is that the audience knows walking in where the story must end. You don’t see a movie called Dracula Untold and expect that at the end of the film the title character will not become a vampire. You don’t see the Star Wars prequels and hold out hope that Anakin Skywalker will resist the pull of the Dark Side. The only way to make a prequel work is to show us a proto-version of characters we think we know well, re-contextualize their relationships, and give them a fresh story that doesn’t depend on the stories we know to be inherently interesting. Perhaps surprisingly, Pan does all of these things, and, a few tin-eared allusions and bits of wordplay aside, serves as a thrilling adventure yarn in its own right, divorced of its source material. – Brian R. (full review)

Writer/director Nathan Silver’s latest tale of an improvised family doing its best to wreck itself is one of the year’s most uncomfortable watches. A character drinking bleach is among the milder examples of Stinking Heaven’s emotional ruthlessness. Set in a New Jersey clean living commune in 1990, the film’s cast of characters are utterly merciless to one another. After one man recounts his lowest moment as sucking dick in an alley for $20, only to be beaten into an epileptic fit (and never get the money), another mockingly claims that his lowest moment was beating a man who tried to suck his dick for $20 into an epileptic fit. Sober living has done these people few favors. – Daniel S. (full review)

Where to Stream: Amazon Prime, Fandor

Time Out of Mind (Oren Moverman)

Finding a link between the shared title of Oren Moverman‘s third feature film, Time Out of Mind, and Bob Dylan’s 1997 album took a little effort. Moverman co-wrote the script for Todd Haynes’ fantastic Dylan saga I’m Not There, and perhaps it was here that the title resonated and, to the writer-director’s mind, could be grafted onto his latest, Richard Gere-led drama. – Zade C. (full review)