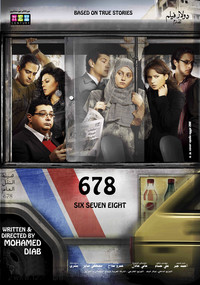 Here in the United States the phrase “sexual harassment” generally makes one think of the kind of office-set scandals that plaster tabloid pages and are featured in Lifetime movies. However, in the gripping Egyptian drama 678 the phrase takes on a much more encompassing and shocking definition.

Shortly after the resignation of Egyptian President Hosni Mubarak,  the story of reporter Lara Logan’s sexual assault became international news, drawing an eye to a culture of misogyny and abuse that some Egyptian women face every day. Logan, who was covering the political turmoil for CBS, was separated from her crew in the dense crowds and was subsequently beaten and sexually assaulted by a group of rioters. While the attack itself was shocking, the response of some news reporters was still more harrowing. Many outlets mentioned Lara’s attractiveness while reporting on her attack and implied that she somehow had it coming. You might wonder why I’m getting into all of this in a movie review, well it’s because this sickening reality is a reflection of the tale told in 678.

Based on real events and set in modern-day Egypt 678 (also known as Cairo 6,7,8) interweaves the tale of three different women and their experiences with sexual harassment. For a nation who takes its image and pride very seriously, this is an especially eye-opening and daring drama for first-time director Mohamed Diab to take on, and he does so with a gritty bravado. Egyptian film star and singer Bushra plays Fayza. The most traditional of the three heroines, she dresses modestly, purposely hiding her figure and covering her hair to detract attention. Still, everyday on her way to and from her government job she is hooted at and groped on the bus. And sadly, like was the case with Miss Logan, the societal view is that a woman who is assaulted in such a way was intentionally attracting attention and so should be ashamed of the harassment. (This isn’t NYC afterall.)

So, Fayza seeks out Seba (Nelly Karim), a more modern woman who is teaching self-defense and self-confidence after having been sexually assaulted by a gang of men. (Her husband was so upset about what happened to her that he left her shortly thereafter, declaring  he wished she would think of how he feels about her attack.) Seba is frustrated that while her classes are full of women who claim they want to learn self-defense, none will admit they have been harassed. Consequently, she tells Fayza that the next time she is groped she should stab the molester with her hairpin. So she does! And is promptly shouted at by a herd of men who declare she’s crazy and throw her off the bus.

Rattled and afraid, Fayza hustles on foot to work – and when she’s approached by a cat-calling man, she cuts him across the crotch with a pocket knife! He shrieks and she takes off – with wild eyes and taste of empowerment. While Fayza mounts her own vigilante crusade to deal with the hidden epidemic of sexual harassment, the third character, Nelly (Nahed El Sebaï), a young woman who openly defies gender expectation, favoring pants over skirts, wearing her hair long and loose, and performing stand-up comedy, takes a more traditional route after her own assault. Nelly’s may be the most horrifying story of the three. One day while crossing the street to her mother’s house, a truck driver who was eyeing her chest from afar, guns his motor, passing by in time to grab Nelly by her t-shirt and gropes her as he drags her down the street. When he finally drops her on the cement, Nelly jumps up and with her mother on her heels takes off after the brute who is stopped at a red light. She jumps onto the hood of his truck to prevent him from driving away, and her mother pulls him from the truck as they yell, “That’s sexual harassment!”

I was personally floored that such a vicious attack was dubbed sexual harassment, as here in the U.S. the word is almost a joke, used mostly in scandal rags. (That’s not to say it’s not an issue, just one that’s woefully low on most people’s priority lists.) Despite pressure from police, her family, and eventually her fiancé, Nelly decides to sue the man for sexual harassment – making her the first woman in the nation to do so. Inevitably these three women become friends, and soon the plot becomes overloaded, balancing their individual storylines with a subplot about the police investigation into the stabbings, while trying to take on various viewpoints of the events. It creates a meandering third act, a common pitfall to issue movies and docudramas.

Still, the 678 is something to behold. Uncompromising and thought provoking, Diab creates an urgent tale out of a serious but oft ignored issue. The female leads are fearless in their performances, painting characters that women all over the world will relate to, and the climax is both inspiring and invigorating. Though rough around the edges, 678 is an audaciously bold docudrama that is eye-opening, jaw-dropping and heartbreaking.

Cairo 678 is currently screening at The Film Society of Lincoln Center’s NDNF.